You are here: Home / Motorsport / 2019 / One-second thriller ends third round of Welsh series 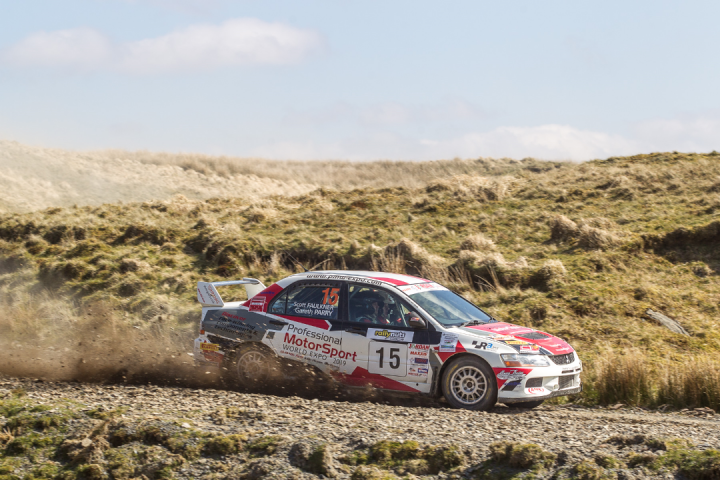 It was round two winners Matthew Hirst and Declan Dear who took the lead on the opening stage in their Mitsubishi Evo IX, two seconds ahead of Faulkner and Parry in their Group N version of the same car.

Third place was held by Richard Hill and Steff Evans in their Subaru Impreza. The stage spent the end of the rally, however, for round one winners Russ Thompson and Andy Murphy, who rolled their Mitsubishi.

Hirst and Dear extended their lead by a further second on stage two only for Faulkner and Parry to pull that second back on stage three. As the cars came into the service halt at the Royal Welsh Showground following four stages the gap was back out to three seconds. Into third place by this point were Graham Middleton and Steven McPhee, the pairing starting to get to grips with their R5 specification Mitsubishi Mirage they were destined to hold that place to the finish.

A puncture for Faulkner and Parry on stage five saw them drop a further six seconds but the rally was finally decided on the penultimate corner of the final stage where a spin by Hirst and Dear saw their rivals slip through to take the win by the narrowest possible margin.

That victory moves Scott Faulkner into third place in the overall championship standings, five points back from Matthew Hirst and Tom Llewellin who are tied for the lead. Declan Dear tops the co-drivers’ table ahead of Gareth Parry with Jim Lewis in third place.

As well as topping the overall standings on the event, Scott Faulkner and Gareth Parry also claimed maximum points in the Group N category for less modified cars. He is tied at the top of the Group N table with Wug Utting who finished second in the category on the event. Their respective co-drivers, Gareth Parry and Bob Stokoe are also tied at the top of their table.

Tom Llewellin also leads the junior driver category ahead of Gethin Price with Zak Hughes third while among the junior co-drivers, Rhys Stoneman holds a five point lead over Tom Murphy while Keaton Williams is third.

It’s Llewellin who also leads the RAVENOL Welsh Challenge for drivers, currently some 19 points clear of Hywel Davies while Josh Taylor is four points further back in third place. Things are closer in the RAVENOL Welsh Challenge for co-drivers where Simon Jones holds a four points advantage over Tom Murphy who, in turn, is six points clear of Johnny Tad Evans.