You are here: Home / Newcomers / CV News / Nissan turn to UK for next London Black Cab 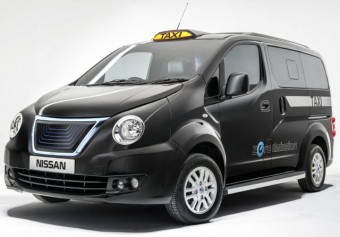 The next London Black Cab will be built for Nissan in the Midlands.

The new face of the Black Cab was unveiled yesterday by Nissan which has won the contract for the bespoke classic cab from 2015.

Based on the company’s successful multi-purpose NV200 platform, the vehicle was first unveiled as a bold and exciting new vision for the famous London Hackney Carriage in August 2012.

In response to feedback from the London Mayor’s office, Transport for London and other key organisations which have put their backing behind the new taxi, Nissan has redesigned the vehicle to better reflect the iconic nature of the traditional black cab.

Nissan’s newly-redesigned taxi has been developed for London, in London, by Nissan Design Europe (NDE) in Paddington, the same design centre responsible for the Qashqai and Juke.

The new taxi will be launched in December 2014 with a modern, clean, 1.6-litre petrol engine equipped with an automatic gearbox. Furthermore, Nissan will launch a zero emission electric version of the NV200 taxi in 2015.

Nissan has already supplied diesel engines to the former Black Cab models but the new models will be a version of the NV200 built in Barcelona.

Stripped out versions will be imported from Spain and sent to a coach building contractor in the Midlands to be completed.

An electric version using batteries made in Sunderland at the Nissan plant will be introduced later.

More details on the boost to the UK Automotive industry will be released over successive months.