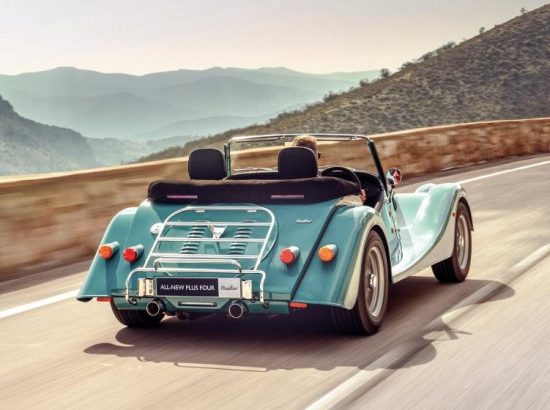 The new Morgan Plus Four is the latest lightweight two-seater from the quintessentially British car-maker from Malvern costing almost £63,000.

It replaces the 94 year old steel ladder chassis with an aluminium platform shortened from the Plus Six and power comes from a 255hp BMW 4cyl 2.0L petrol engine giving 0-62mph of 4.2sec, a maximum close to 150mph and it’s being targetted at the US market in particular.

A study of 2,000 mums and dads found a quarter get annoyed by kids kicking the backseat, and more than a third get stressed by their little ones complaining of boredom and three in 10 find toilet breaks an annoying aspect of driving with kids.

As a result, an additional 33 minutes is added to weekly journeys resulting in late arrivals and delayed departures because they have to stop for comfort breaks, as well as missed turnings and leaving things behind according to the survey for cinch car buying site.

Insurance company Allianz has raised about £400,000 for the charity Mind.

It’s aiming for £1M donations by the end of 2021 and staff are engaged in a wide ranging set of activities each month.

Two in five drivers would only travel as far as 30 miles away from their home town or city to buy their perfect used car, according to research released today by AA Cars.

The AA-Populus poll of more than 17,000 drivers found that a quarter of people would be willing to travel up to 60 miles away from their home and men are more likely than women to look further afield.

Soccer legend Gary Lineker found himself the subject of a special VAR replay.

He was promoting the first telematics insurance monitor for commercial drivers from Ticker, a sort of Van Action Replay.

Membership of a pay by the hour car club could save a user at least £250 annually compared to owning their own vehicle, it has been calculated by a specialist insurer for the industry.

iCarhireinsurance.com looked at the costs for a typical Ford Focus user and said the savings were greatest if a member did not have their own car but hired as required.