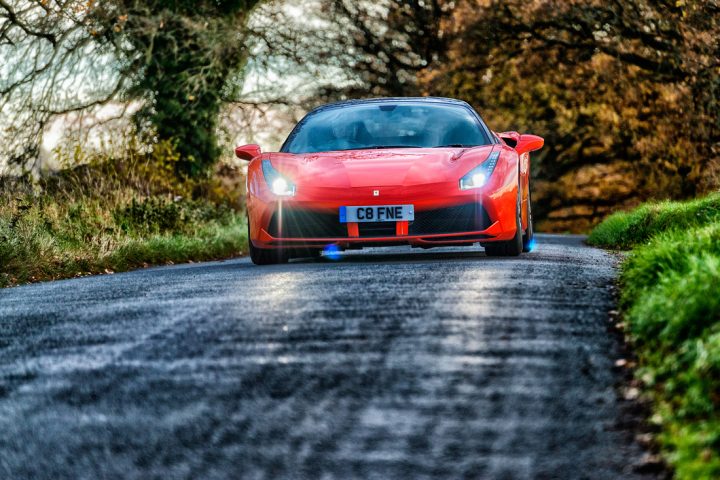 The Ferrari 488GTB is the baby in the family which can trace its DNA to 1975 when its forerunner replaced the charismatic Dino, and a lot has happened over four decades, says Robin Roberts.

The engine is taken from the California and tuned for the 488GTB so it’s a good and gutsy pedigree with twin-turbos to give it strong punch from standstill, through the intermediate gears on to the legal limit, and almost twice as fast again.

Being a Ferrari, you never get an ordinary gearbox but a seven-speed transmission and driver selectable modes working in conjunction with the engine’s software to give normal, sport or track settings.

Hang on once you turn the button out of normal as the engine and transmission software sharpen the throttle and gearchange responses and the car’s character dramatically changes. There’s a track-use launch control for the ultimate getaway experience.

It produces a different exhaust note as well so you not only feel the different modes at work but you hear them in real-time and not through some induced artificial audio track as in other supercars.

You have familiar paddles to move up or down the sequential box if you want to play at being a racing driver, but there really seemed little advantage to be gained over letting the highly sophisticated transmission do the thinking for you while you left a bit more of your brain to savour the experience of steering it through a series of sweeping curves, admire its turn-in, grip and roadholding, and all the time with that wonderful backing track filling your ears. 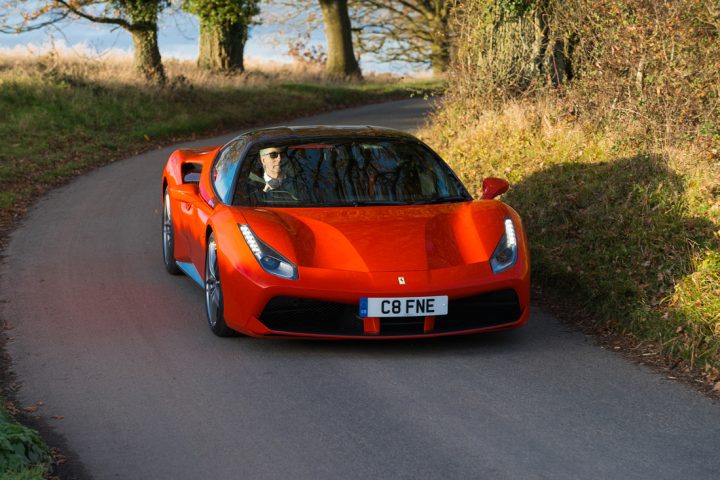 The big wheels and tyres can feel heavy when parking and you are aware it needs a good bit of room to turn around. On main and country roads the steering in the test car did produce a constant twitchiness as the tyres coped with worn surfaces beneath and this resulted in a steady writhing of the steering wheel in the hands which was tiresome.

At speed the steering gave good feedback and felt very positive without being too heavy while the front wishbone and rear multi-link suspension kept it all firmly planted to the road.

Underfoot are big brakes and their stopping power was immense and also impressive with its progressive feel once the driver attuned to their natural sharpness and confidence inspiring ability. 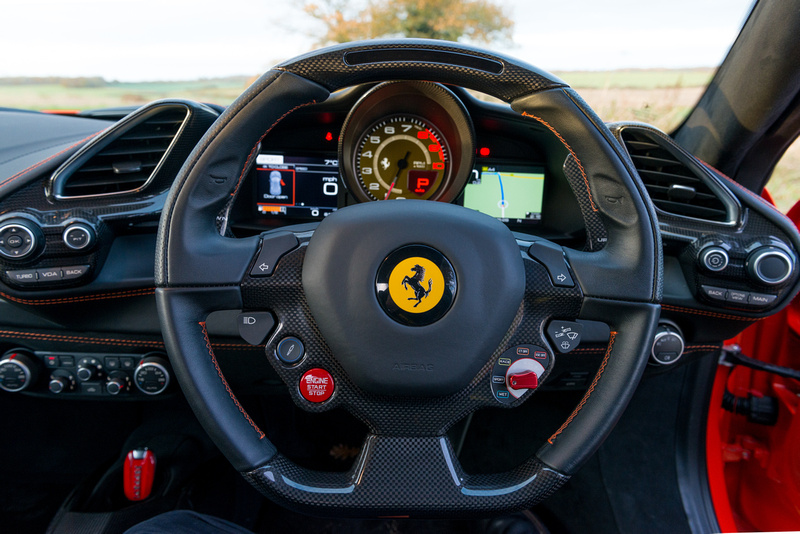 The secondary controls generally were well laid out and close to hand but I struggle to fathom out the use of spoke-buttons for indicators as you can find yourself arms crossed on a roundabout and needing to indicate before exiting but then find the button is on the opposite side to where you expect. Possibly you don’t indicate in a Ferrari 488GTB as everyone is looking at you anyway.

While on peculiarities of the GTB, the price tag of close to £184,000 does not include a self-dipping mirror but it’s an old fashioned manually dipped one, although again in the 488 there is not much hope of anything keeping up with you anyway. The other switches for headlights and wipers were also on the steering wheel spokes.

Instruments were comparatively straightforward, large and very well marked for engine and road speed, fuel and temperatures and altering the driving mode button changes the display as well to highlight important aspects. It did seem complicated at first but I suppose a driver can precisely tailor what they want to see at any time.

The infotainment system is an easy to use and effective display with wifi connectivity, phone integration and personal music. 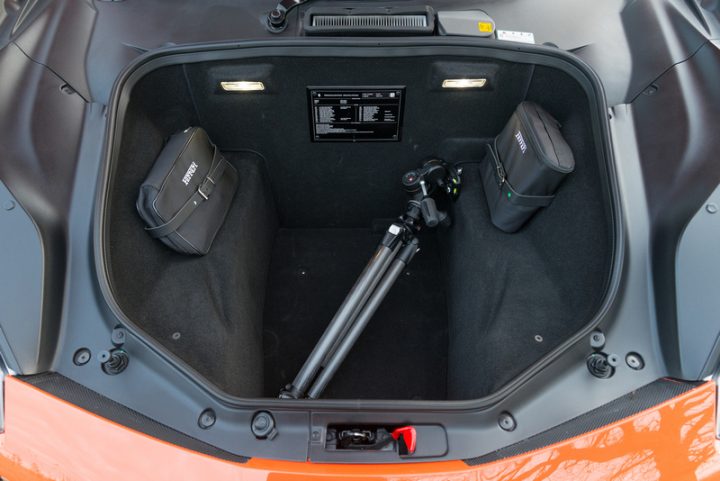 Oddments space is not great inside because all the places to put things are small and I suspect most items would be pushed behind the two seats or into the front boot, which is reasonable for a couple of weekend bags but little else.

Access to the boot, the engine and the cabin is good and inside the room is reasonable for all but the tallest occupants with seats which are not generously padded but surprisingly comfortable nevertheless. Their adjustment is simple and the shape securely holds you. 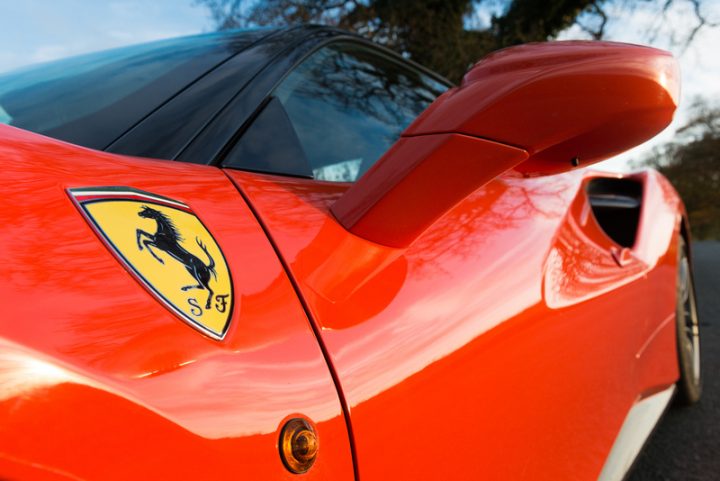 You sit low in the Ferrari 488GTB and the rising rear wings and high tail limit what you can see but side and forward sightlines are good, the wipers clear a lot of the windscreen and the lights are long and wide in beam. You have to be careful emerging from side roads with the A-pillar and big mirror housings combining to create a noticeable blindspot, however.

Noise levels are not high when driving normally. They rise as the engine takes deeper breaths and you can play with the dynamic settings to introduce more crackle and roar as desired, but wind and road noise were muted by comparison. 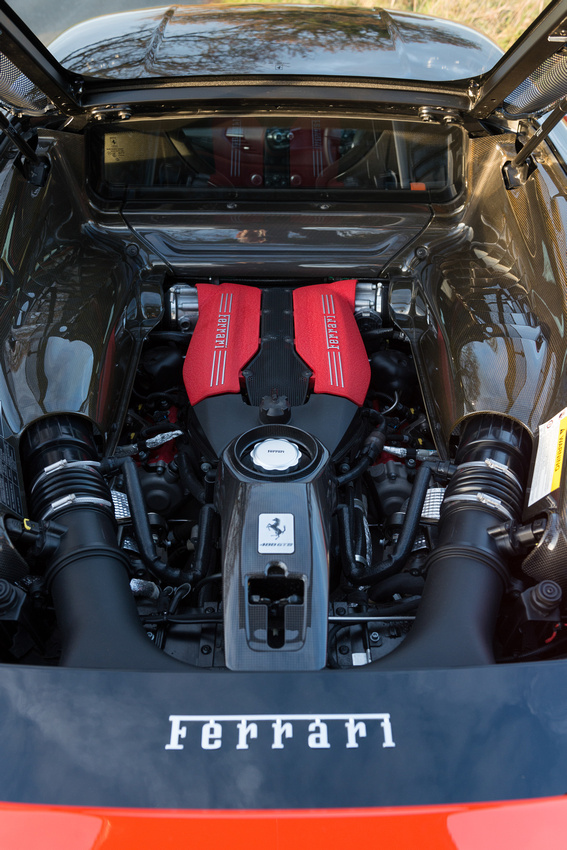 It is the performance and the way the Ferrari 488GTB gets going which most impresses. The engineers have done a brilliant job to reduce turbo lag to virtually nothing, but it still pours out power mid range and keeps giving well in excess of normal road speed limits.

The gearchanges match the flow to give a seamless experience without any harsh changes but just another kick in the backside as acceleration rapidly builds, accompanied by a rising exhaust note. 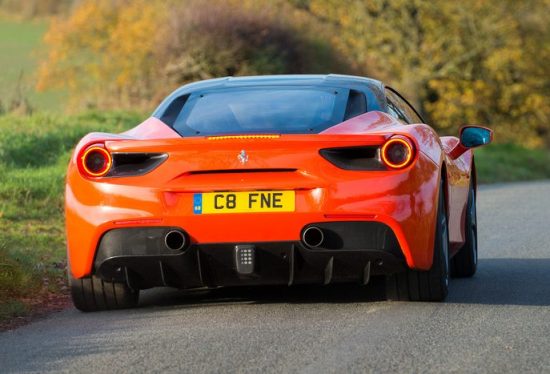 The stability of the 488GTB comes from the suspension but also the way the designers have made the air flow over and around the aluminium lightweight body and tub with careful ducting to cool the engine and keep the tail firmly down.

It is helped by a nose design and undertray which come from sports car racing and literally suck it onto the tarmac. Its simple flowing bodywork is not only pleasing on the eye but thoroughly practical in effect.

It’s not faultless, but Ferrari’s bambino has matured into one of the finest supercars you can buy.