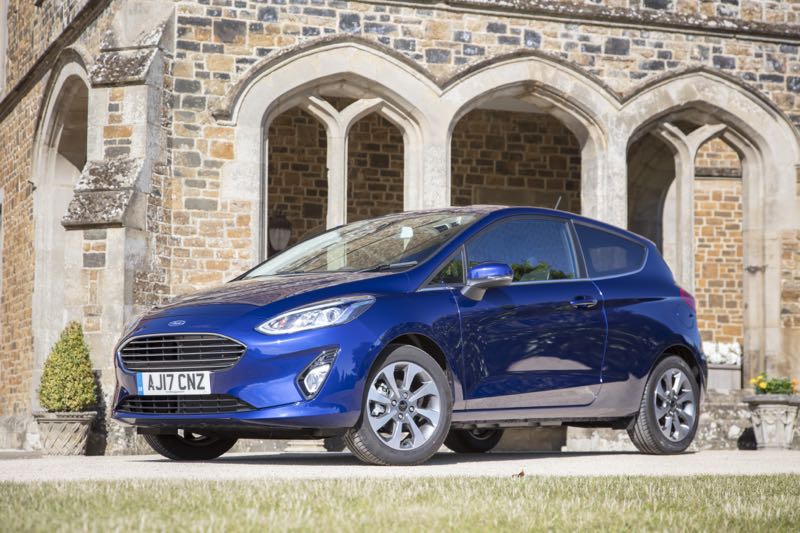 If you like your current Ford Fiesta, you’re going to love the new one, writes Robin Roberts.

Essentially, just the name and trim levels have been carried over to the models now reaching showrooms which get revised engines, a six-speed manual gearbox for the first time and a lot of extra equipment and features.

Out goes the dual-clutch automatic transmission in favour of a more conventional torque-converter and only the base model is fitted with a five-speed box.

A bigger five-door bodystyle will dominate sales but Ford is keeping open options with a three-door and a couple of diesel engines in a range led by three-cylinder petrol units.

Prices start about £1,000 lower than before and run to approximately £1,000 more at the top end with prices rising a few per-cent across the range for added equipment which would cost a lot more if separately ordered. The new Fiesta range is priced from £12,715 to £21,225.

The mainstream models are now arriving but the autumn will see the range-topping Vignale and sportier ST-Line appearing, and next spring is the scheduled launch of the compact MPV model called Active and high performance ST. There are essentially two suspension settings, soft for the mainstream and firmer for the more sporting derivatives, but a considered wheel and tyre choice will also affect the ride quality.

With the bulk of new Fiestas being delivered with petrol engines we decided to concentrate on two best sellers for our brief first drives.

The 100 and 125hp three-cylinder units are surprisingly quiet and their smoothness is well matched by that of the new six-speed manual gearbox. When not under load they pull well with noticeably sharper pick-up from the more powerful unit.

Steering feels well weighted and you can specify parallel parking aid if you need it, while brakes show good progression and power build up. 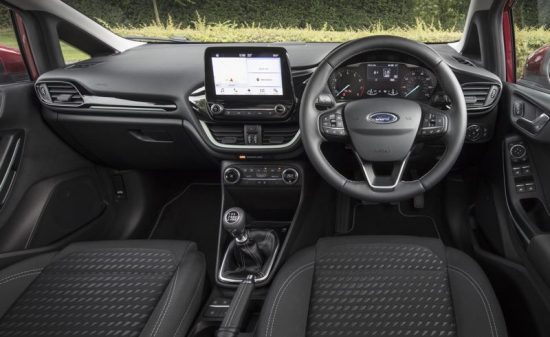 The conventional instruments display is very clear infront of the driver with a panel splitting the round dials to give running information and essential data. A neatly designed 6.5 or 8-inch screen atop the fascia houses the infotainment and its apps to seamlessly integrate Apple or Android phones.

Room was good but I found legroom better in the three-door version and the bootspace is easy to use and a match for rivals in capacity.

On the road the perkier 125hp was preferred for its responses and ease of driving but the 100hp still gave a good account of itself and overall showed 55.2mpg to the 44 mpg of the more powerful engine.

A lot of drivers have praised the last Fiesta for its blend of ride and handling and Ford engineers have taken this to a new level with a wider track and longer wheelbase, revised suspension rate but our test cars had optional larger wheels which still made them firmer than some might like.

The new Ford Fiesta feels firmly planted on the road at all times, turns in sharply and grips well with no real vices to speak about.

You can hear it coping with our poorer roads but generally the system soaks up bumps and ridges and you are not shaken about. 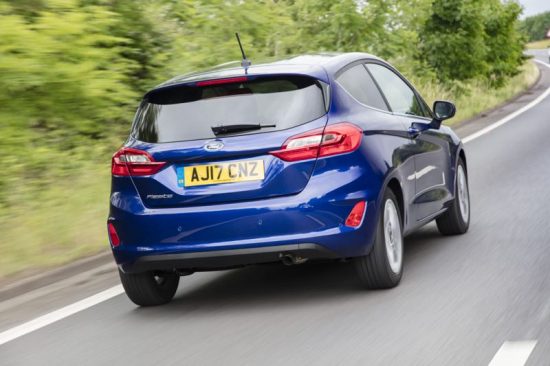 Ford has still used a lot of grainy plastic inside on the door casings and fascia with a resulting hollow feel when tapped, but there are detail highpoints to relieve this and with the new large infotainment screen the overall impression is a step up from what has gone before and it’s closer to the best of the modern rivals.

Whichever new engine chosen of the two driven, you can keep up with traffic, take advantage of overtaking opportunities and enjoy longer journeys in greater comfort than the old Fiesta.

Verdict: The new Ford Fiesta has reset the benchmark a good bit higher in the class.