British new car registrations fell by 35% in June as many dealerships reopened after coronavirus lockdown measures were lifted, but the Welsh and Scottish showrooms’ openings were delayed until the end of the month and this affected figures.

A total 145,377 new cars were registered in June, leaving accumulated figures down by nearly a half, according to data from the Society of Motor Manufacturers and Traders, the smallest drop since February.

Chief executive Mike Hawes said, “Many of June’s registrations could be attributed to customers finally being able to collect their pre-pandemic orders, and appetite for significant spending remains questionable.”

Demand fell 44% in March, 97% in April and 89% in May and the industry has called for continuing support to stimulate sales, including a possible scrappage scheme.

The lacklustre performance means that the market is almost 616,000 units, or -48.5%, behind the same period last year, with some 240,000 private sales lost since consumers were told to ‘stay at home’ and retailers forced to close, resulting in an estimated £1.1 billion loss to the Treasury in VAT receipts alone.

While almost every brand saw high double digit falls in sales, the only major manufacturer to turn around was Toyota with over 2.7% improvement and the most eye-catching was an over 87% rise in registrations by MG dealers.

Private demand proved more resilient than business, down -19.2% in June with orders made pre-lockdown resulting in 72,827 registrations and accounting for more than half of the market. Fleet sales fell by a very substantial -45.2% to 69,498 units as businesses paused purchasing amid expenditure reviews. 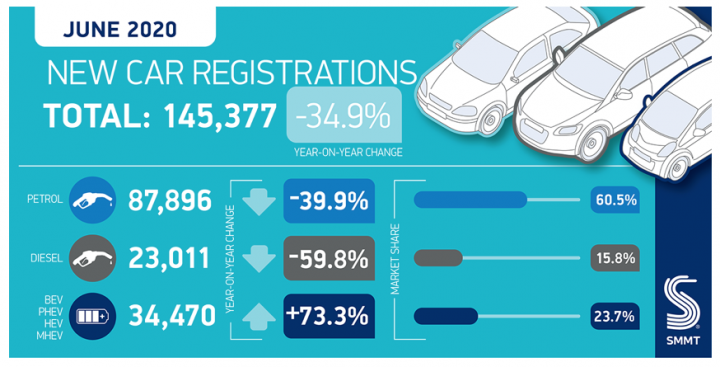