Such is the competition in the global new car market to gain an advantage manufacturers are leaving no potential new niche sector unexplored, says David Miles.

Niches of niches are now common and the growth in sales of the German premium brands of BMW and Audi are mainly attributed to having more new models in more new market sectors.

As an example,  BMW’s first ever  production front wheel drive model range – the 2 Series Active Tourer  five door C-segment hatchbacks are scheduled to go on sale before the end of the year.

For now though the latest addition to their growing range is BMW’s X4 SAC – Sports Activity Coupe they call it rather than the commonplace term of SUV or Sports Utility Vehicle.

Whether we see them as Activity or Utility 4x4s they all are five door, five seater permanent four wheel drive sporty on-roaders but with limited off-road abilities as well.

Natasha Newman, BMW’s UK product manager for medium sized cars said at the press launch this week, “The new X4 is based on the same platform as their best selling   and just updated X3 SAV compact Sports Activity Vehicle.  The X4 is priced at £3,600 above the equivalent X3 version but £2,180 of that extra cost is taken up by added specification.”

She said, “Our X range now accounts for 18% of our total BMW UK sales.”  BMW achieved another record year of UK sales in 2013 with 135,583 registrations and xDrive all wheel drive cars and X models account for 40% of that total.

She added that currently the newly updated X3 has a six months waiting list but it is still outselling its main competitor – the Audi Q5. The X1 range sold close to 8,000 units in the UK last year, the X3 just over 8,000 vehicles, the large X5 nearly 4,500 units and the X6 over 1,600 sales.

Sales expectations for the X4 are around 2,000 units in a full year and 5,500 units over a lifecycle of four years. Both the X3 and X4 ranges in the UK will see 75% of customers being retail buyers. Sales to fleet and business customers are restricted due to the reluctance by some fleet operators to offer 4×4 SUVs to users in the corporate sector.

The X4 is offered with three levels of specification, depending on the engine choice. Top of the line up is M Sport which will be the choice of 55% of UK customers followed by xLine with 25% and SE at 20%.

In addition to a wide range of options the X4 is available with the BMW Professional Media Package which includes a full range of connected drive services, real time traffic information and an iDrive controller for £900. In addition Surround View costs £530 and the Head Up display £935.

When it comes to the choice between the three engines on offer for the X4 all are turbodiesel units with no 3.5i six cylinder petrol option for the UK market.

The X4’s side profile has a sweeping coupe roofline with the highest point over the front passengers then gently sweeping down over the rear passenger compartment meeting with the steeply raked rear tailgate.

Headroom in the rear will be an issue for those over six feet tall.  The side profile also has a rising waistline and wide flared muscular wheel arches which highlight the sporting nature of the X4’s design.  The boot and load area starts with 500-litres of boot space with the rear seats in place and this goes up to 1,400-litres with the rear seats folded down, that is 50/200-litres less than the X3.

At the UK media launch BMW wheeled out just one version of their new X4, the 30d engine matched with the most popular M Sport specification and carrying a price tag of a muscular £46,395.  Whilst the best selling four-cylinder 2.0d unit with 190hp and torque of 400Nm (295lb ft) will give spirited performance of 132mph and just  8.0-seconds to reach 62mph with fuel consumption of 54.3mpg and CO2 emissions of 138g/km,  the 3.0d six-cylinder unit provides even more muscle to demonstrate the X4’s performance abilities.

Power output is 258bhp but it’s the huge increase in torque, 560Nm ( 413lb ft) from 1,500rpm which makes this engine the real-deal when it comes to power delivery and  strong response for fast but relaxed cruising or brutally quick power delivery for overtaking slower traffic on our congested roads.

The performance figures speak for themselves and given that a customer can afford the 3.0d M Sport version, it is the one to go for. It gobbles up long journey cruising miles easily, speedily and with relaxed refinement.

Dab the throttle and it surges forward quickly but quietly and without denting the fuel economy to any great extent. It gives the X4 the pace and performance to go with its sporting coupe looks in a vehicle which is close to two tonnes in weight.

The chassis with its clever all wheel drive system constantly shuffling the driving torque to the wheels which needs it means the X4 can be hustled around winding country roads when needs be dismissing slow moving traffic safely and with ease.  Sitting lower on the road than the well mannered X3 improves the flat and level ride performance and it turns crisply thanks to its well weighted steering. 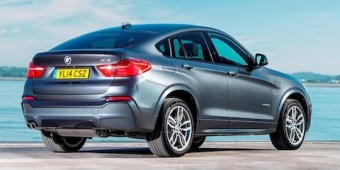 Despite our test car being fitted with optional 20-inch wheels, ride was remarkably refined with the £650 electric damper control option – a must if you are delving into the options list and the ECO-PRO system will firm up the ride through Sport and Sport+ but in Comfort or Economy the system provided better ride comfort.

With the larger optional wheels road noise intrusion over some surfaces was noticeable and there was also more wind noise intrusion than ideal from the door mirrors but that was only noticeable due to the hushed performance of the refined 3.0-litre turbodiesel engine.

Overall the X4 is another interesting and classy high performance addition to BMW’s ever growing range passenger vehicles. It’s not as practical as the X3 but neither is it going to be so numerous on our roads which, for the discerning buyer, will be a distinct advantage.

For:  Lots of stylish ‘show’; but with plenty of performance ‘go’, fills a perceived gap in the niche model market, scarcity value, beautifully crafted interior quality.