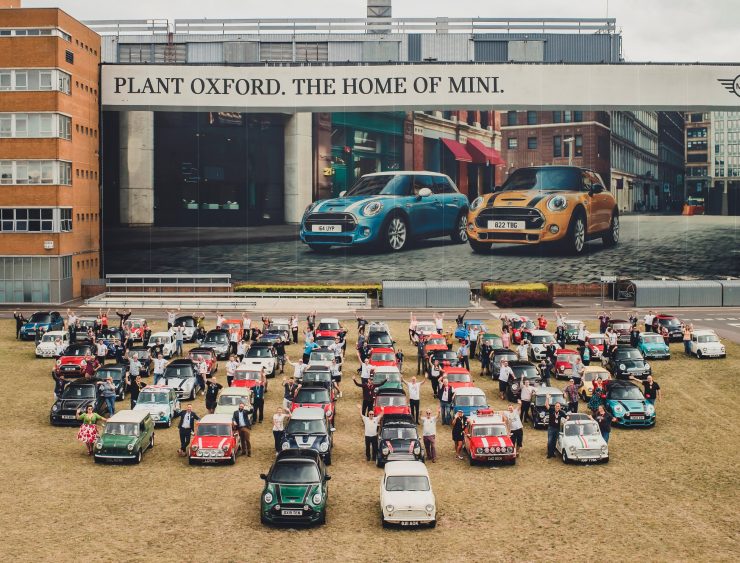 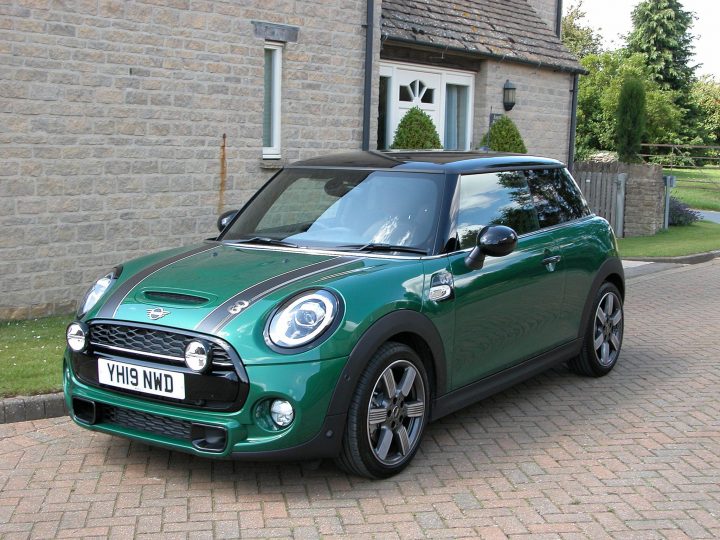 The landmark car was a MINI 60 Years Anniversary Edition just like the one I have been test driving. To celebrate the 60th anniversary MINI brought together at Plant Oxford one car from each year of production – 60 cars from 60 years.

To celebrate 60 years of the BMC Mini and MINI from the BMW Group, 500 units of the Anniversary Edition 3-Door Hatch in British Racing Green IV paint finish with Cooper S specification with its standard 7-Speed Steptronic automatic gearbox were made available for UK customers and these are more or less sold even allowing for its £29,995 price tag. That’s a substantial £5,660 more than a standard spec Cooper S  auto 3-Door Hatch  (less optional extras) on which the 60thAnniversary Edition model is based.

Distinctiveness and exclusiveness could probably justify part of this price hike and no doubt this 60thAnniversary Edition model will be a ‘keeper’ for most of the 500 UK owners so that’s its exclusivity value. 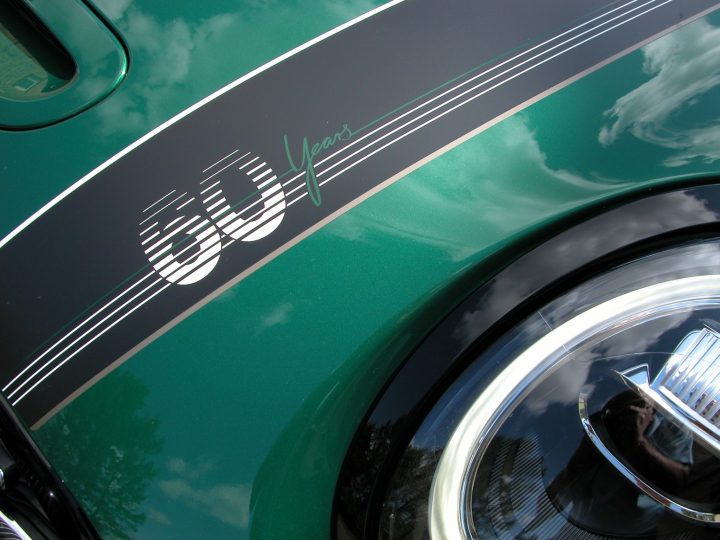 Its distinctive value is because of the deep rich British Racing Green IV colour and contrasting black roof. Add in some matching bonnet stripes with a 60th anniversary logo and the  luxury leather seats finished in ‘Dark Cacao  with contrast stitching and piping plus more 60th anniversary graphics, an LED projection logo from the driver’s door and the distinctiveness elements are almost complete.

As with all third generation  BMW owned MINI Hatch models, this unique edition vehicle has a high level of standard equipment including LED front and rear lights, intelligent emergency call, ambient lighting, automatic headlights with a rain sensor plus much more. 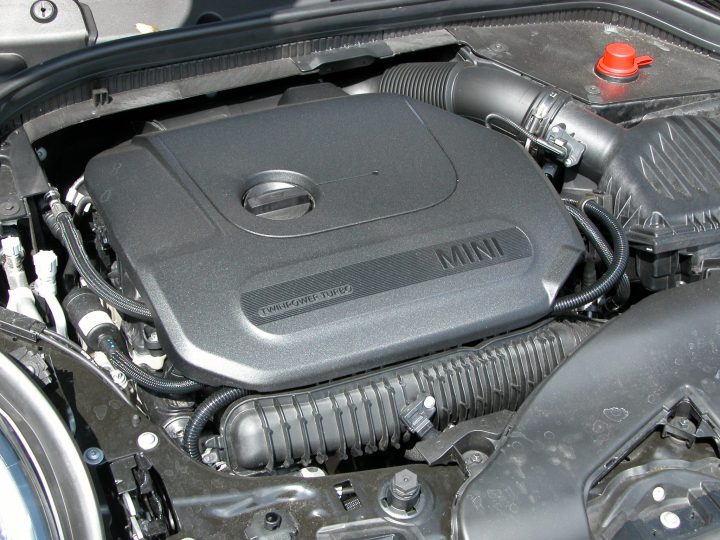 The familiar 2.0-litre Cooper S 4-cylinder 192hp turbocharged petrol engine comes with standard 7-speed auto Steptronic gearbox.  This responsive engine has plenty of ‘grunt’ on demand from low to high speeds, ideal for leisurely or sportier ‘cut and thrust’ driving. It’s refined and a nice but not intrusive exhaust growl that identifies it still having a sports nature despite its ‘posh-frock’ specification.

Top speed is 146mph and the zero to 62mph acceleration time is 6.7-seconds which is swift enough given the car’s high quality and specification nature which also includes having an easy driving automatic gearbox but that does have gearshift paddles for manual changes. 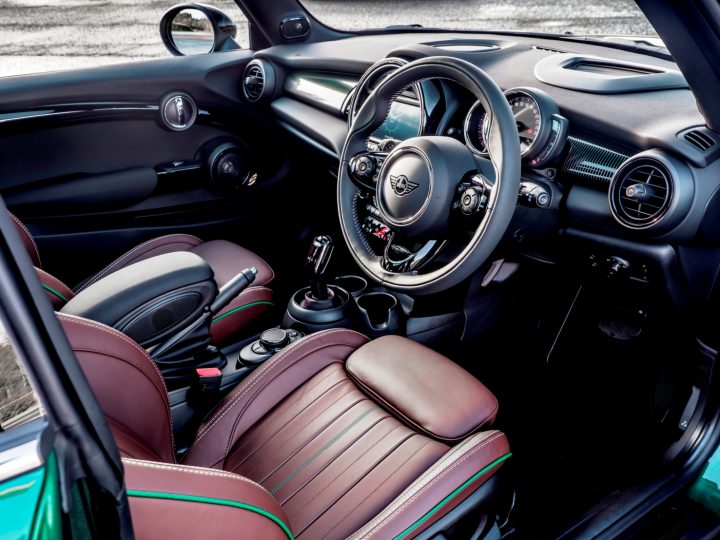 The Combined Cycle fuel consumption figure is 44.1mpg and during my week of driving, short runs, winding country roads where the car excels, and open road cruising the figure was a real-life 43.5mpg.  With CO2 emissions of 122g/km First Year petrol VED tax costs £170 followed by the Standard rate for year two onwards of £145. Company car drivers will pay 28% Benefit-in-Kind tax.

Perhaps it’s a shame that this 60th Anniversary Edition model is only available as a 3-door Hatch, but I guess that is a tribute to the original 2-door Mini saloon with its tiny boot with drop-down bootlid. 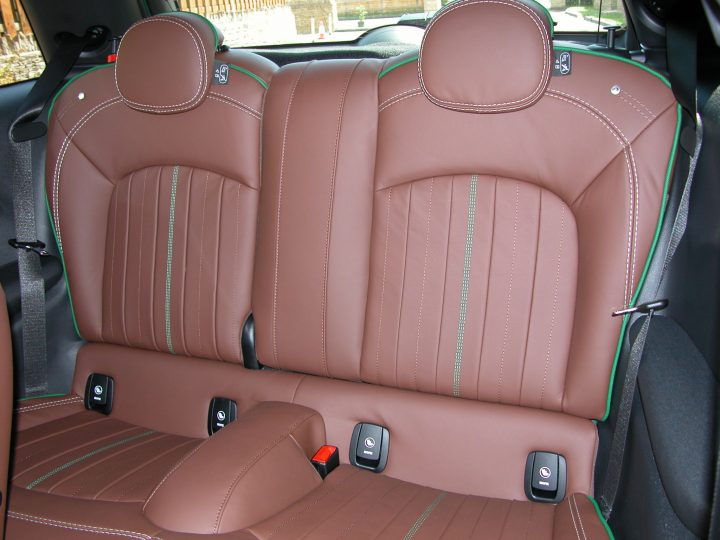 Access is never great with 3-door hatchbacks and with all the sumptuous padding of the interior trim and sports front seats, access to the two equally well padded rear seats is not easy for adults. 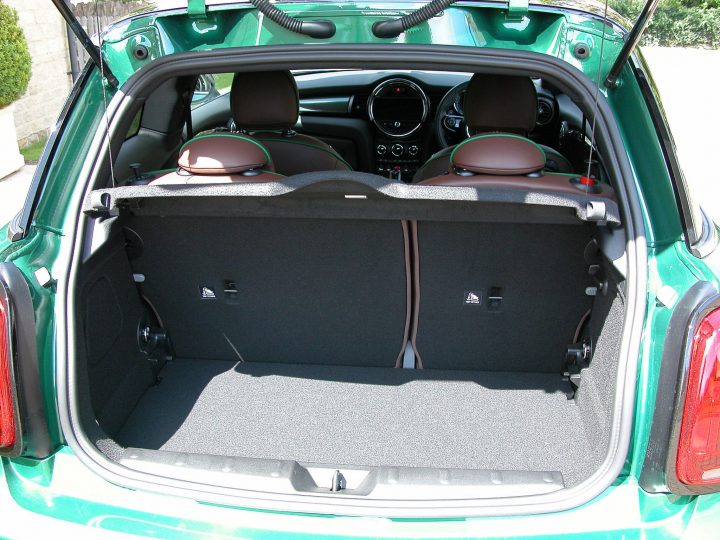 However unlike the original Mini the BMW MINI Hatch has fold-down rear seats which increases the small 211-litre capacity to a much more usable 731-litres, but that of course means no rear passengers can be accommodated.  At 3,850mm in length, 1,932mm wide with a height of 1,414mm this third generation MINI Hatch is just as easy to park and scuttle through traffic as the original. But of course this model is about as far away from the original generation Mini as you can get in terms of performance and price.

As sophisticated as the latest generation MINI is, particularly with Cooper S performance and the 60th Anniversary Edition specification, the test car still felt like an original Mini in many ways. 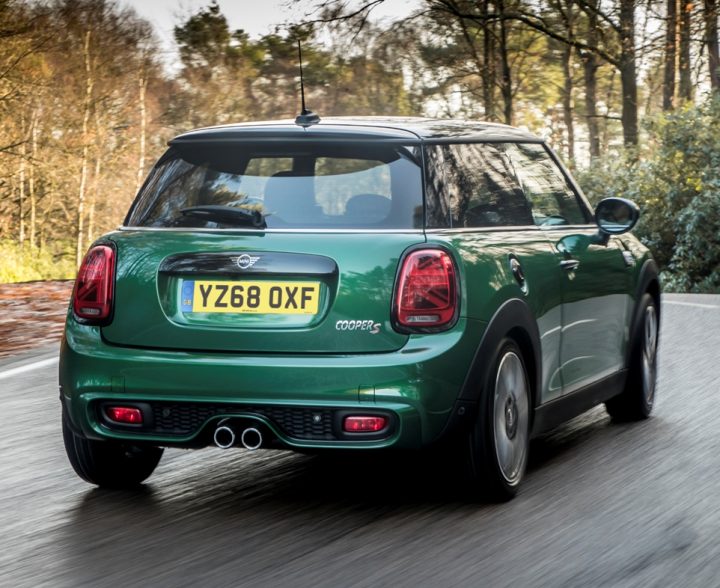 It is neat and nimble to drive, fun to look at and easy to live with, although not for affordable general family use as the original was. But of course everything has risen, performance, spec, price but at least the Mini or MINI still exists – happy 60th anniversary.

For: A 60thanniversary tribute to the birth of the British Mini, high spec, high performance, limited edition exclusivity value, built in Oxford

Against: Only available as a 3-door Hatch, mostly all sold already despite its significant price, limited rear passenger seat access, harsh ride at times and too much road noise intrusion due to low profile tyres. 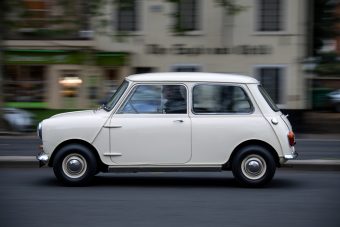 The original Alex Issigonis designed British Mini was launched in 1959 under BMC’s Austin and Morris brands priced from £497 to £537.

It had an 848cc, 33hp normally aspirated transversely mounted 4-cylinder petrol engine and until its decline in 2000 it sold over 5.3-million units worldwide. Minis were produced at Plant Oxford until 1968 before production was moved to Longbridge Birmingham where it continued until 2000 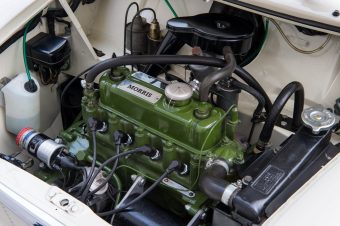 In 2001 Mini (lower case letters) became MINI (upper case) under the ownership of the BMW Group of brands but production of most, but not all, new generation models still come from  the Cowley Plant in Oxford built at a rate of 1,000 cars a day or one new MINI every 67-seconds. Around 80% of Oxford built MINIs are exported to 110 countries. How the MINI range has developed in terms of models available, quality, specification, power and performance, global demand and of course price.