You are here: Home / Newcomers / 4x4 / Genesis trumpet a trio of newcomers

If you are a motorist with only a passing interest in the introduction of new models you will not have missed the news that a new premium brand called Genesis arrived in the UK and Europe and you’ll see a lot more of them this year.

Genesis is the luxury arm of Hyundai the South Korean brand which sells globally in huge numbers alongside its other brand, Kia. South Korea, China, Russia, Canada, USA and the Middle East are larger and longer established market regions for Genesis since the premium brand was created in 2015.

Genesis came to the UK in May this year with first sales starting in September and all these sales have been to private  customers,  no fleet/business sales have started yet as the premium brand establishes itself against competitors such as Audi, BMW, Mercedes, Jaguar and Lexus.

The Genesis brand in the UK has an interesting business model as it sells directly to the customer, it doesn’t have a dealer network as such, it markets itself heavily through media advertising, sponsorship and media test drive events such as the one I attended.

It does however have what Genesis calls a flagship studio at the Westfield shopping centre in London and other similar studio/showrooms will be set up in other heavy footfall venues in the UK in due course.

Other potential customers can also contact Genesis where a dedicated personal assistant can arrange for a test drive car to be delivered to the potential customer and if the purchase goes ahead, either by phone or on-line, the customer’s car will be delivered and on-going it will be collected for servicing and a loan car left in its place.

Now this business model is not new, Nissan tried it with Infiniti and that didn’t work and they had a handful of dealerships with showrooms and service centre spread around the UK.   Genesis feels much has changed since that time and customers are now well used to buying on-line and having goods delivered and if required returned.

Simon Branney, head of Genesis Motor UK PR operation, said, “We don’t have a sales target but so far 70% of our initial UK sales have been for our SUV models and across the ranges between 60 and 65% of models sold so far have been petrol versions although we offer turbodiesel engines as well. Our electric models (concept below) arrive in 2022, they will be all-electric power, no hybrids or PHEV plug-ins, and petrol and diesel power options will continue.”

At the regional UK test driving  event I attended we tried the latest model to join the range, the newly added G70 Shooting Brake, their best selling model overall the – GV70 mid-sized SUV and the current range flagship the huge GV80 SUV. 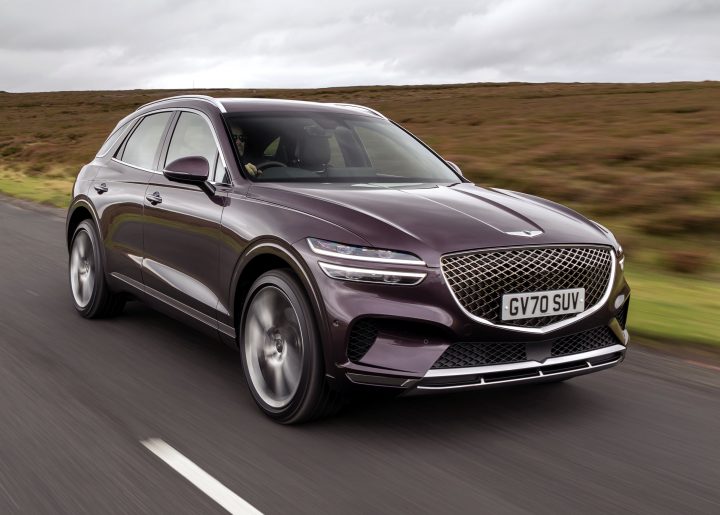 SUVs of all size are very much in demand so it’s no surprise with Genesis their best selling model so far is the GV70 mid-sized SUV.  The line-up is priced from £41,000 through to £44,370 with Premium Line, Luxury Line and Sport Line spec levels. There are two, 4-cylinder engine options available across the range, the 2.2D turbodiesel 210bhp unit and the 2.5P turbo-petrol 304bhp version. Both use and 8-speed automatic transmission with selectable driving and terrain modes and all have 4WD.

The turbodiesel unit returns an official Combined Cycle figure of 40mpg with CO2 at 195g/km whilst the petrol unit returns  29.7mpg (25.4mpg on test) with  CO2 at a high 230g/km so tax implications are costly but in keeping with the competition.

My test version was 2.5T turbo petrol version with Sport Line spec priced at £43,350 which again doesn’t look out of line with its premium competition but it has to be added its proven competition where in the EU and UK the Genesis models and its sales/service operations have to prove themselves to punters that they will a secure buy.

I’m not going to add much to what I’ve already written about the Shooting Brake, it’s the same high quality interior, great layout, comfortable and impressively sharp handling for a tall riding SUV. The equipment level is comprehensive and highly recommended with all the sat-nav, driver alert and support systems plus on-board infotainment and connectivity.

The turbo petrol engine with 421Nm of torque was punchy for acceleration and very responsive for low to mid-range speed responses.  Top speed is 149mph with zero to 62mph taking a mere 6.1-seconds so I would say this model is not only the best Genesis model so far, it’s impressively quick when needed.

It’s practical as well with an overall length of 4,715mm with a long wheelbase for its class of 2,875mm. This means rear seat legroom is excellent and that still leaves a 542-litre boot which goes up to, 1,678-litres with the split rear seats folded down. 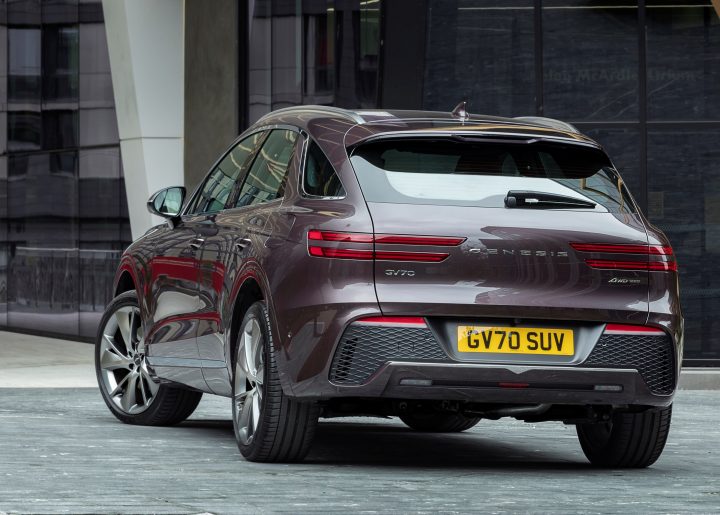 As a package not only is the GV70 the best Genesis so far it’s probably the best or very near it, mid-sized SUV when price, quality, styling and specification are combined in its SUV sector. Not only was I impressed with this and other Genesis models during my first experience with the brand but I was totally surprised  as well, but perhaps I shouldn’t have been when we know the reputation Hyundai now has as a leading global high quality car manufacturer. 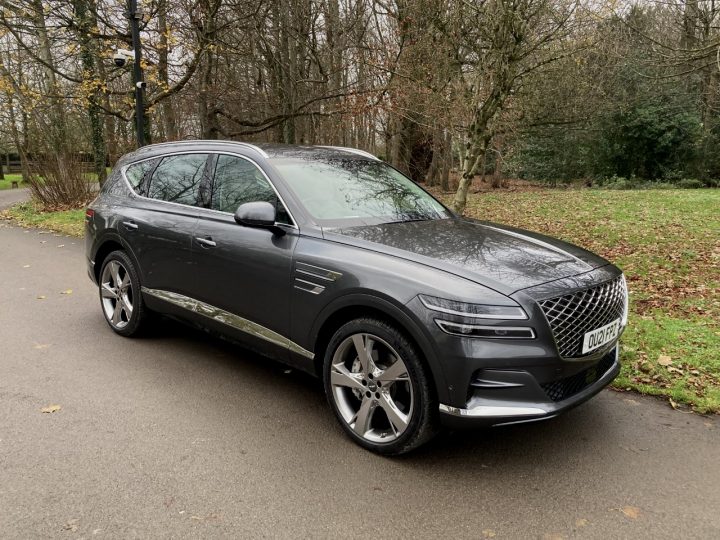 This is the current flagship model range in the Genesis line-up; it’s a huge SUV with five and seven seat options, the choice of a 2.5T 4-cylinder 304bhp turbo petrol engine or a brilliant 3.0D 278bhp, 6-cylinder turbodiesel unit. Both are mated with an 8-speed auto transmission with 4WD and driving and terrain modes.   Prices start from £56,715 and go up to in excess off £62,000 and there are lots of options that will push that price up a lot.  There are Premium Line and Luxury Line equipment levels for both engine choices.

I tried the 3.0D turbodiesel in its 5-seat configuration with the Luxury Line spec level and this is priced at £62,415 but in reality with options, including the £40 spare wheel, the price was £69,785.  The options included Comfort Seats, Nappa Leather upholstery, Limited Slip Differential, 22-inch wheels, Sunroof, Lexicon audio system and Innovation Pack whatever that is.

In its premium brand large SUV sector these prices are competitive and look a bargain if compared with those asked by Land Rover, Range Rover, Audi and BMW for their large status SUVs.

Despite its size, 4,945mm long, 1,975mm wide and 1,715mm high and weighing, depending on spec, up to 2.3-tonnes, the GV80 has an athletic exterior appearance, it doesn’t look a huge ‘slab’ of a vehicle. It’s only once you get behind the wheel does its size and weight become very much more apparent. 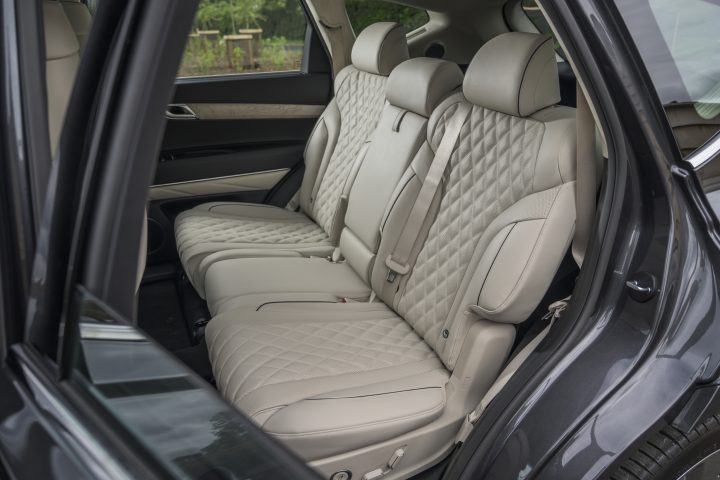 For the record this size and mass provides ample room for five adult passengers, or seven if that seating option is taken.  The boot space is 727-litres with five seats in use and with the rear seats folded this goes up to a massive 2,144-litres. For good measure the diesel version has a braked towing capacity of 2,722kg.

Despite its sophisticated driving support, chassis, suspension and 4WD control systems, it is not the most agile or precise handling of large SUVs. The body roll control, cornering predictability, steering feedback and general ride quality over country roads is not fully up to European model standards.  It feels more set up for American or South Korean highways than our winding, hilly and countryside narrow lanes. Yes it has all the driving support, 5-star safety and info system you could possibly need and it’s mostly set up ready for some autonomous driving operations when allowed, but it’s not as nice to drive as it is as impressive to look at both inside and out.

Like other Genesis models the build quality is impeccable, the interior a joy to be cosseted in although I appreciate it was the highest spec model I tried plus its options.

A very worthy mention goes to the 3.0-litre, 6-cylinder turbodiesel engine. I know diesel is not politically correct but with big SUVs such as the GV80 you need that 278bhp of power but even more impressive is the 588Nm of torque available from just 1,500rpm. It’s a gem, smooth, refined, quiet and really responsive, not like some other big diesels. It’s fuel frugal as well with the WLTP Combined Cycle figure of 31.5 to 33.1mpg and on my brief test drive on winding country roads the figure was 28.5mpg.  The CO2 figure is 231g/km so taxes are high but in the grand scheme of things in this premium large SUV the cost is insignificant which customers are prepared for. 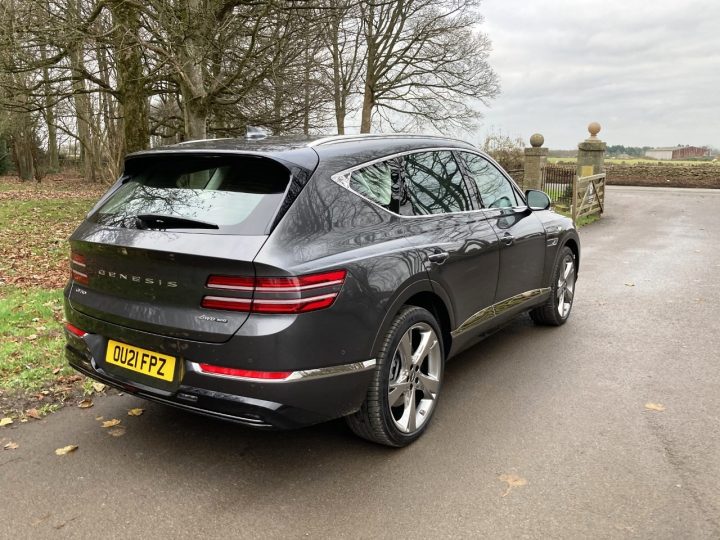 Overall it’s an impressive model but if you can live with the slightly smaller GV70 mid-sized SUV that Genesis is the model to go for. It’s just as nice inside, it has great kerb appeal but it’s much sharper to drive with nicer road-going manners, oh and it will be easier to park.

The G70 Shooting Brake is the fifth and latest model range to be added to the fledgling Genesis premium brand’s line-up in Europe and the UK and it’s arguably going to make the biggest impression, particularly when taking on premium brands from the Midlands and Germany, writes Robin Roberts.

They come with a choice of a 2.0-litre petrol or 2.2 turbodiesel engine, both getting an easy driving 8-speed auto transmission feeding power to the back wheels.

Being lower slung than the SUVs it has a very sporting feel and sharp responses with plenty of power underfoot for quick getaway and overtaking.

Access was good, seats wrapped around and had lots of room and adjustment in the front pair. Room is good for anyone up to six feet tall and the cushions are generous for those of a wider girth while the fifth door opened to reveal a good sized and flat loadbed.

A tough test for any semi-estate or estate is how well it rides when not laden and the Genesis G70 Shooting Brake passed our test with a good compromise and two aboard. The suspension is comfortably soft not firm as in some familiar sporting estates and that will satisfy most buyers I suspect.

It handled well, never gave rise to a moment’s concern on some twisting undulated single carriageway roads and it’s the sort of car I would happily drive from Wales to the Western Mediterranean for a holiday, when permitted again. 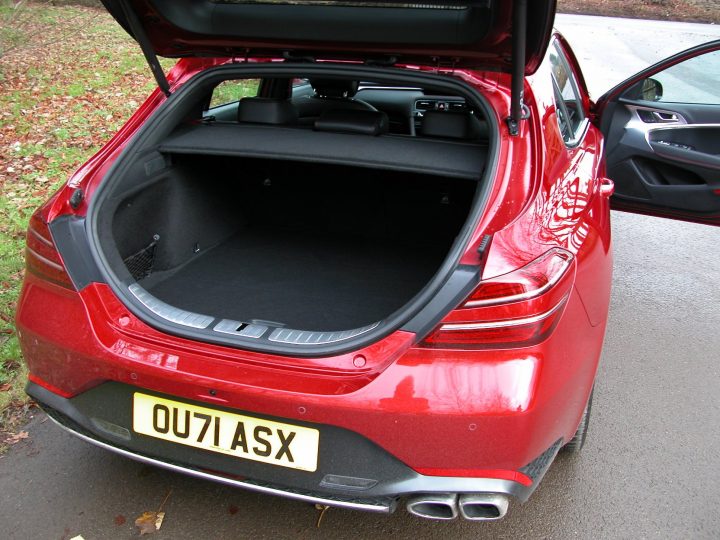 Being an estate the all import load space is 465-litres and with the split rear seats folded down this goes up to 1,535-litres.  Rear seat legroom look reasonable if not class leading but priced at £41,430 for the top Sport Line spec it looks a competitive buy and currently good scarcity value. You are not going to see many of them on our roads for a while so what price exclusivity?