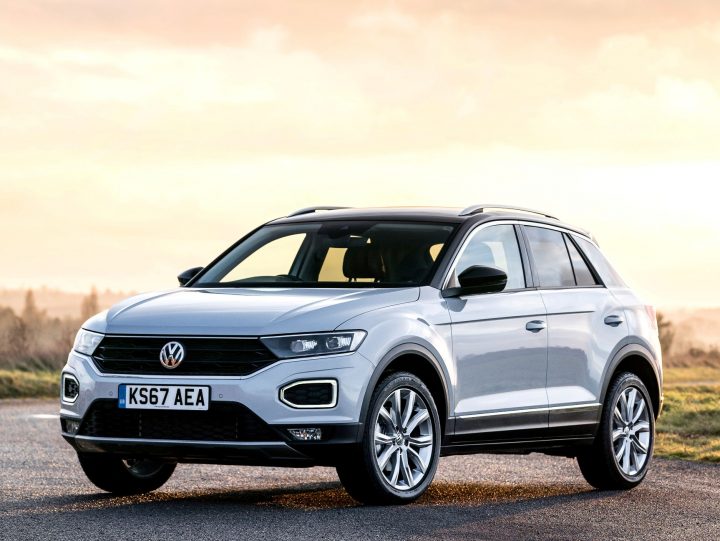 Yet another new range of compact SUVs are arriving now in the UK, this time it’s the VW T-Roc entering their 190 dealership this week.

Television advertising with the T-Roc’s ‘Bam the Ram’ and advertising strapline ‘Born Confident’ launches on Boxing Day. It should make you smile in a sheepish sort of way.

The T-Roc sees Volkswagen enter a new market segment for them with this eye-catching and sporty looking new model which styling wised is somewhat of a departure from most of their conservative designs. The T-Roc is positioned beneath the established and popular Tiguan SUV and above the forthcoming new T-Cross small SUV due next year. Of course at the top end of their SUV range is the heavyweight Touareg 4×4 due to be updated next year. Also waiting in the wings is the Tiguan Allspace seven-seater SUV which also launches early next year.

Whilst a few deliveries of the new T-Roc to early adopter customers might trickle out of the showroom doors this month it will be January before main deliveries start and the model range has just been expanded with the addition of two more engine options. Prices start from a competitive £18,950 and currently range up to a costly £31,485, plus of course there are lots of extra cost personalisation options and specification packs to increase the prices. 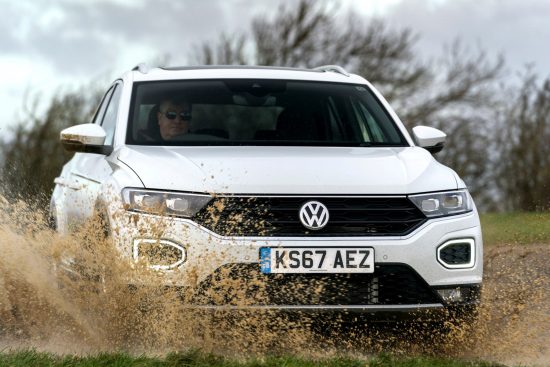 Mike Orford Head of Press and Public Relations said the most popular variant will be the 1.0 TSI 115hp turbocharged petrol SE trim at £20,425. Volkswagen expect petrol will be the choice of 80% , SE will be the most popular choice taking 40%, 75% of customers will be retail and the 4Motion models will take less than 10%.

When it came to the important question of total sales, he said “It is difficult to give a prediction because of the overall falling sales of new cars in the UK, but we are expecting the T-Roc to make a significant contribution to our performance quickly joining the top selling Golf with over 72,000 sales last year, the Polo with 54,500 sales closely followed by the Tiguan. Sales will go mainly to conquest customers.” Pundits are predicting at least 20,000 T-Roc UK registrations in 2018

The T-Roc uses Volkswagen Group’s volume selling MQB scalable length platform, the same as the Audi Q2, SEAT Ateca and Skoda Karoq. In essence the T-Roc is an SUV version of the VW Golf except it has sportier and chunkier exterior styling, a taller stance and more interior space, especially headroom. Other competitors include the Peugeot 3008, Vauxhall Mokka X, Ford Kuga and it’s slightly longer than the other compact SUVs that include the Kia Stonic, Hyundai Kona, Nissan Juke, Renault Captur, MG Gs, Citroen C3 Aircross and Ford EcoSport.

The wide front and rear tracks, the long wheelbase stance and steeply raked forward rear C-pillar with sharp styling lines running from the front to rear of the body, gives the T-Roc an athletic appearance.

Volkswagen’s Head of Design, Klaus Bischoff, is reported as saying, “We have created another authentic SUV with the new T-Roc. In launching this crossover we are also bringing a very expressive, even ‘sassy’, design to the streets. This emotional component makes it likeable. The T-Roc is therefore equally well suited for the urban world as it is for great adventures.”

So it looks good on the streets with a bright kerb appeal for the driveway, add in the ‘down with the kids’ T-Roc branding and the new model range is certainly a breakaway from the conservative styling of most VW models and should appeal to the young and young at heart. Although manufacturers always look for new ‘conquest’ customers probably the T-Roc will attract current VW Golf owners as it offers more interior space coupled with that latest must-have SUV styling. 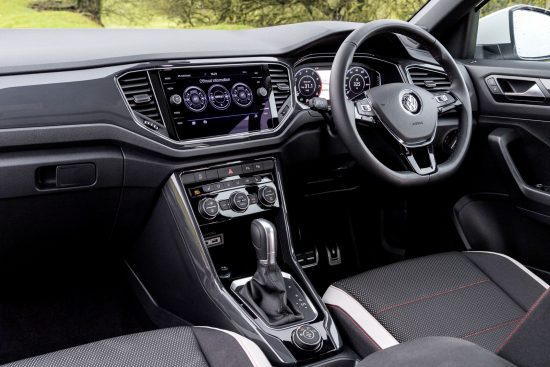 Inside the youthful design continues but worryingly the quality of the hard and not soft-touch plastic and vinyl trim areas don’t match what we now associate with other new compact SUVs, its more budget than posh despite its near premium price structure. However the option of ColourPad inserts for the dashboard, centre console surrounds and door panels brighten the overall look of the vehicle’s interior. That said the standard finish dashboard design, touchscreen and other controls are all well known from other VW models as well as the family brands of Audi, SEAT, and Skoda. 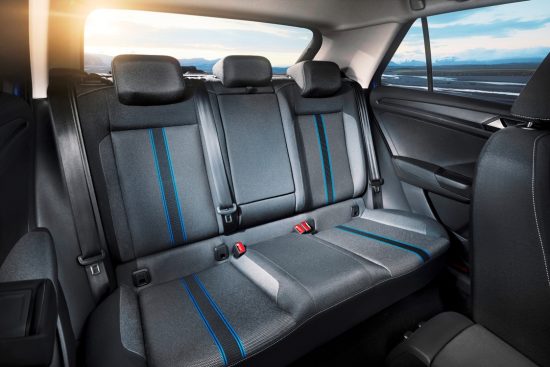 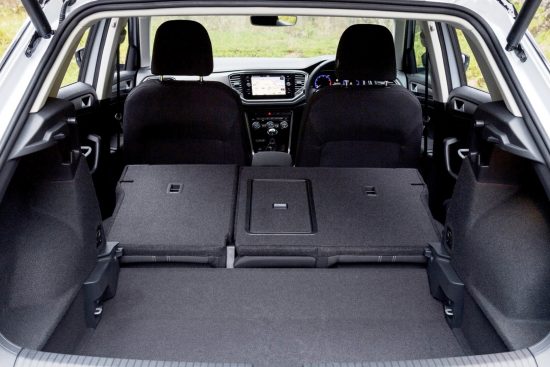 Personalisation and additional styling trim are key elements in today’s new car market and the T-Roc is not short of those either but consider what options are actually needed, not just nice-to-have otherwise the cost escalates considerably.

Potentially being an SUV one of the major choices to be made by a customer, depending where they live – town or country, will be 2WD or 4Motion traction. The bad news is that 4Motion is only available on the top and most expensive specification SEL models and only with the 2.0-litre TSI 190hp petrol engine with its DSG auto gearbox priced at £31,485 or the 2.0-litre TDI 150hp turbodiesel with a six-speed manual gearbox priced at £28,345 which probably prices them out of the mainstream compact SUV market.

It is likely most customers, particularly retail buyers, will stay away from the diesel engine option for the reasons we all know about and opt for the 1.0-litre TSI 115hp turbocharged three cylinder petrol unit or the new 1.5-litre TSI 150hp EVO turbo petrol engine with cylinder on demand technology.   My choice would be the 1.0 TSI with SE specification priced at £20,425 which seems quite enough to pay given it’s yet another compacts SUV with 2WD. It has most of the important spec needed on a daily basis.

Fortunately the VW Group’s Driving Profile Selection with Eco, Normal, Sport or Individual modes, standard on SEL, is one of the more attractively price options so to add that very useful driving tool to an SE model only adds another £160 to the vehicle’s price. The Discover Navigation system will cost an extra £1,130, it’s good but some might consider it not to be worthwhile and opt for an after-market portable sat-nav system or the navigation function from their mobile phone.

The little 1.0-litre TSI triple-cylinder turbo petrol engine we know well from other VW Group models. It is a little gem but whilst its 115hp seems modest, the 200Nm of torque from 2,000rpm makes it very driveable and responsive. Add in cost-effective and it is easy to see why this unit is predicted to be the most popular choice. Matched to a six-speed manual gearbox top speed is 116mph, zero to 62mph takes 10.1-seconds, the Combined Cycle fuel economy is officially 55.4mpg but on my brief test driving over a mix of country roads and dual; carriageways it returned just 43mpg. With CO2 emissions of 117g/km VED road tax is £160 First Year rate reducing to £140 Standard rate for year two onwards.. Company car Benefit-in-Kind tax is 22% and insurance is a relatively attractive group 11E.

The first driving impressions I got from my brief test was the really sharp handling, fast acting steering, plenty of front wheel cornering grip yet all retaining a really comfortable and compliant ride. To my mind it is the best handling and most comfortable compact SUV available today. The handling and ride quality didn’t appear to be any different in the other more powerful models I tried. 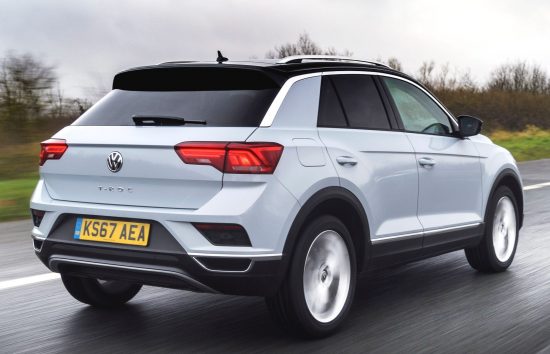 Overall the VW T-Roc might be late to the compact SUV market but there is still time for it to make a big impression and potentially steal sales from other brands, if not VW’s own Golf Hatchback and the Tiguan slightly larger SUV model.

Against: Lack of soft-feel interior plastic panels and trim, only higher spec models have the best technology, 4Motion only available on the top SEL spec versions, top spec models look expensive, not a very generous warranty.