You are here: Home / Newcomers / EV News / Ford in talks for new project in Bridgend plant 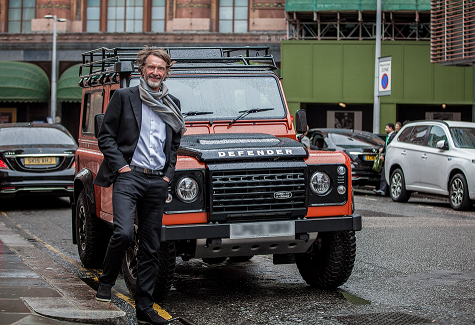 Ford is looking at “high technology opportunities” for the future of its Bridgend plant, the company said today.

It was responding to media reports that it’s in talks with petro-chemical, oil and gas company Ineos over its plans to build a modern version of the Land Rover Defender. Ford will continue to build its own engines in plant and this week started assembly of the new Dragon EcoBoost unit.

Ineos founder Sir Jim Ratcliffe (above) is Britain’s richest man and said he will spend over £600M on the new Ineos Automotive venture for worldwide sale with production commencing after 2020. A number of senior jobs in the business were advertised last month.

The new model designed to fill a gap in the market for a rugged yet comparatively simple model suitable for global use has been created by a former subsidiary of Mercedes-Benz with a team of 200 engineers.

MBtech has been working on Projekt Grenadier for over a year in Stuttgart and if the deal with Ford is agreed it could come at the right time for the Welsh plant, which will lose its lucrative V6 and V8 petrol engines contract with Jaguar Land Rover by 2020.

Over 1,000 Welsh jobs could be transferred if the new Grenadier model goes into production at Bridgend, but the staff would have to be retrained and this would attract support from Welsh Government in addition to any direct financial aid it qualified for as incoming business investment.

Previously, Ineos said it wants to build a model in the market for the Defender but with modern powertrain, possibly a hybrid or all electric.

This could utilise a bespoke engine or a modified Ford petrol unit acting as a generator and there may be opportunities to create a traction battery manufacturing line at Bridgend.

Ineos has also said it is looking at a number of sites including the north east where its petro-chemical plant is located, so the discussions in Wales are still on-going and by no means a final agreement.

The new Grenadier will be about £25,000 and Ineos hopes to assemble 25,000 annually with exports primarily to the US, sub-Saharan Africa and Europe. For some markets a diesel option still makes sense.

In a short statement, Ford said, “While Ford Bridgend Engine Plant has a long-established and successful record in the delivery of world-class engines, the auto industry is undergoing rapid change and, together with our union partners, we continue to look at other high-technology opportunities for the future.”