New car registrations continued to improve in December and the market in Britain reached 1.61M, but still the lowest in three decades.

The UK new car market recorded its fifth consecutive month of growth in December, with an 18.3% increase to reach 128,462 new registrations, according to the latest figures from the Society of Motor Manufacturers and Traders. 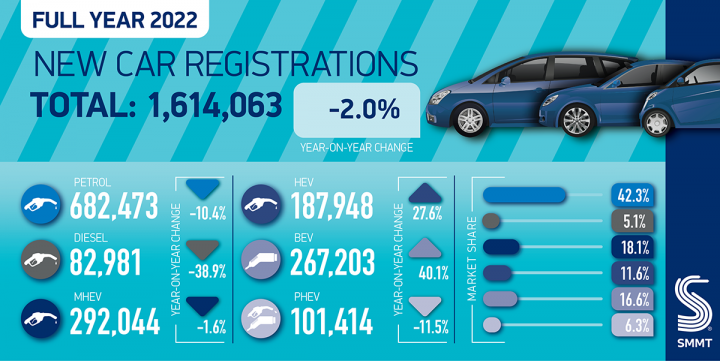 Hidden in the figures was the fact that evs outsold diesel cars for the first time by the end of the year.

This second half year performance was not enough, however, to offset the declines recorded during the first half of 2022. Despite underlying demand, pandemic-related global parts shortages saw overall registrations for the year fall -2.0% to 1.61 million, around 700,000 units below pre-Covid levels.

Constrained supply saw many manufacturers prioritise deliveries of the latest zero emission-capable models. December saw battery electric vehicles (BEVs) claim their largest ever monthly market share, of 32.9%, while for 2022 as a whole they comprised 16.6% of registrations, surpassing diesel for the first time to become the second most popular powertrain after petrol.

Meanwhile, plug-in hybrids (PHEVs) saw their annual share decline to 6.3%, meaning that combined, all plug-in vehicles accounted for 22.9% of new registrations in 2022 – a record high, although a smaller increase in overall market share than recorded in previous years.2 Hybrid electric vehicles (HEVs) also enjoyed growth, rising to an 11.6% market share for the year.

But the SMMT also concluded with a repeated that need for more roadside changepoints, saying, “Chargepoint provision also remains a barrier to EV uptake. The government’s EV Infrastructure Strategy forecast that the UK would require between 300,000 and 720,000 chargepoints by 2030. Meeting just the lower number would still require more than 100 new chargers to be installed every single day. The current rate is around 23 per day.” 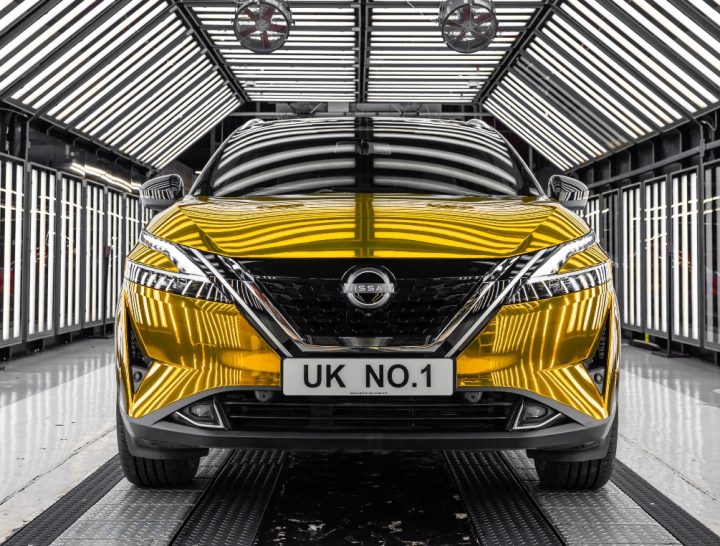 December’s best sellers were the Tesla Model Y and the Tesla Model 3 but the top ten for the year were led by the Nissan Qashqai, the first time it’s hit the top of the list and the first British-built car to do so for a very long time.

“To secure that growth – which is increasingly zero emission growth – government must help all drivers go electric and compel others to invest more rapidly in nationwide charging infrastructure.”

“Although overall sales for the year still finished down on 2021, dealers will feel that they did well to bounce back from a sluggish start caused largely by supply shortages.

“Electric Vehicles remain a bright spot with sales up 40% over the year, and this trend is likely to only grow further in the coming months.

“Further good news is that UK car production grew a further 5.7% in November, with a 18.3% rise in EV output.

“Despite this though, the new car industry still faces uncertain times in the new year.

“Double-digit inflation continues to squeeze people’s ability – and willingness – to invest in big-ticket items like a brand new car.

“We expect to see more drivers turn to alternative ways of accessing a car this year, with leasing becoming increasingly popular as its fixed monthly payments offer drivers financial certainty.”