You are here: Home / Motorsport / 2021 / Evans takes Toyota to WRC crown in Italy

Flying Welshman Elfyn Evans helped Toyota win the WRC manufacturers’ title for the first time in three years, but it was a bitter sweet result for him.

The Frenchmen ended their careers together in style with victory at FORUM8 ACI Rally Monza after a thrilling showdown with Toyota Gazoo Racing team-mate Elfyn Evans (below).

The lead changed hands six times across three days of challenging speed tests in the foothills of the Italian Alps and at Monza’s iconic Temple of Speed circuit.

The outcome was decided when Evans spun in the penultimate speed test, allowing Ogier to win by 7.3sec in a Yaris World Rally Car.

Ogier will step back from full-time driving next year, while this marked Ingrassia’s final rally and said, “I just feel kind of empty right now because it’s always an exhausting season,” whose win marked the 200th world rally success for France.

“We give so much into it. I really need to go to every single team member and give them my big thanks, because without them we are nothing. They are world champions today as well, we are manufacturer, driver and co-driver champions.” 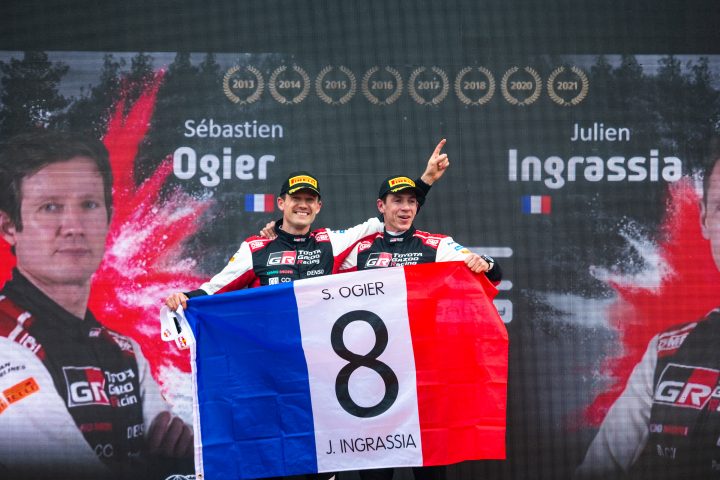 Ogier survived a massive final morning fright when he clipped a concrete barrier at Monza. The impact took a chunk out of his front right tyre, but the Pirelli rubber remained inflated.

His championship winning margin was 23 points from Evans. Their 1-2 finish ensured a clean sweep of the major titles as Toyota also secured the manufacturers’ honours for the first time since 2018 after winning nine of the 12 rounds.

The event marked the end of the World Rally Car era after 25 seasons as next year will bring the introduction of exciting new hybrid-powered Rally1 cars to the championship.