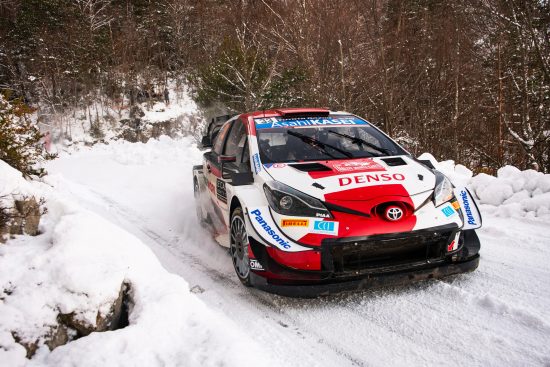 Welsh wizard on wheels Elfyn Evans has started the 2021 WRC championship where he finished last year, just behind team-mate Sébastien Ogier who was on his home ground on the opening round of the new series Rallye Monte-Carlo.

Sébastien Ogier celebrated his 50th world rally win and a record eighth victory at Rallye Monte-Carlo on Sunday afternoon but it had been tough fight with Elfyn settling down sooner and leading the event after the first day and then admitting he had eased off too much in the variable icy conditions.

Ogier opened the defence of his 2020 FIA World Rally Championship title with a sublime performance in the French Alps, mastering snow and ice to head Toyota Gazoo Racing team-mate Elfyn Evans by 32.6sec in a dominant 1-2 for the Japanese squad.

Ogier’s eight victories span three decades and have been achieved with five different manufacturers. He ended a perfect weekend by winning the final Wolf Power Stage to add five bonus points and seal a maximum 30-point haul from the rally.

The Frenchman shrugged aside early brake problems in his Toyota Yaris. He launched a charging recovery after losing the lead on Saturday following a spin and a puncture to regain top spot ahead of Sunday’s finale in the mountains above Monaco.

Ogier, who delayed retirement for one final WRC season, more than doubled his lead in the final leg for an emotional win on a rally based in his birthplace of Gap. A 1-2 marked a dream start to Jari-Matti Latvala’s management career as team principal.

“That’s not a bad end to the weekend,” Ogier said. “The car has been amazing. I really enjoyed the weekend, it has been such a pleasure. I almost have tears in my eyes now and it was a good decision to do one more year. Jari-Matti – welcome boss, with a win!”

Evans led on Saturday night after Ogier’s time loss, but the Welshman could not repel his colleague and felt he had been over-cautious in the difficult conditions.

“It’s been good, but I never felt it was never 100 per cent as it should have been. There were some good stages, but never consistently where I’d really like to be. Perhaps we were just a little below the point you could call the level of risk,” he explained.

Last year’s victor, Thierry Neuville, finished a further 40.9sec behind in a Hyundai i20. It marked an impressive result for the Belgian, who split with long-term co-driver Nicolas Gilsoul less than a week before the start, and did not partner replacement Martijn Wydaeghe until Thursday’s opening speed test.

Neuville climbed to third when Kalle Rovanperä’s hopes of achieving a Toyota clean sweep of the podium ended with a Sunday morning puncture. The Finn finished 1min 20.1sec adrift.

Dani Sordo was fifth in another i20 after a frustrating weekend for the Spaniard on his last rally with co-driver Carlos del Barrio. Japan’s Takamoto Katsuta rounded off the top six in another Yaris.

Round two of the championship features northern Finland’s all-new Arctic Rally Lapland. The series’ only pure winter rally is based in Rovaniemi on 26 to 28 February.