You are here: Home / Motorsport / 2021 / Evans frustrated after fine run in Ireland

It speaks volumes for his driving ability and competitive nature that Meirion Evans feels slightly disappointed to have finished second on an Irish rally and beaten only by a top local driver – but that’s what the 26-year old Lampeter-born driver felt after finishing runner-up on the Wexford Rally in his Scan Station-backed Volkswagen Polo GTI R5. 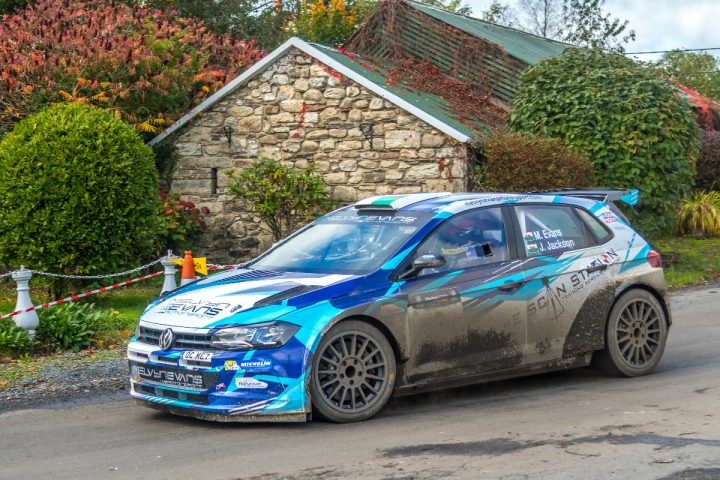 The narrow closed country roads around the medieval town of Wexford in southeast Ireland were drier for the next loop, but as both stages were repeated there was now an extreme amount of gravel and mud on them. In some places it was more akin to a gravel rally, which Meirion is less accustomed too.

He continued to push hard on his Michelin intermediate tyres, but lost time on the sections of road which passed through farmyards and at corners where there was only gravel and thick mud. Despite driving well, Meirion had dropped to second place by the time he’d reach the event’s second and final service halt after four stages.

And when the road conditions were far muddier and gravel-like in places when the same two stages were repeated for a third time, Meirion and co-driver Jonathan Jackson (Colwyn Bay) decided to settle for the runners-up spot, eventually finishing 29.7 seconds behind Josh Moffett/Andy Hayes (Hyundai i20 R5).

The result continues Meirion’s excellent run of success in 2021 – where on five rallies he has won the Argyll Rally in Scotland and the Three Shires Rally in England, finished second in Wexford and on the Cork 20 International Rally in Ireland and third on the Rallye Du Boulonnais in France.

Plus his family-run Melvyn Evans Motorsport squad has opened up a 53 point lead at the top of the British Rally Championship Teams’ standings after a one-two points scoring finish on the recent Mull Rally, with just two rounds of the series remaining.

“I’ve got to the point where I’m not totally happy about finishing second, which I should accept as a good thing at this point in my career,” says Meirion.

“I’m still pleased with the day. We had pretty good pace and it’s important that we can learn from it and improve in the right areas for the future.