Research from charge point mapping service Zap-Map has shown that around a third of EV owners also own a petrol or diesel vehicle.

But its survey of over 4,300 EV drivers showed that, for more than 1,300 ‘dual fuel drivers’ who also have a petrol or diesel vehicle, electric is chosen for the vast majority of journeys. 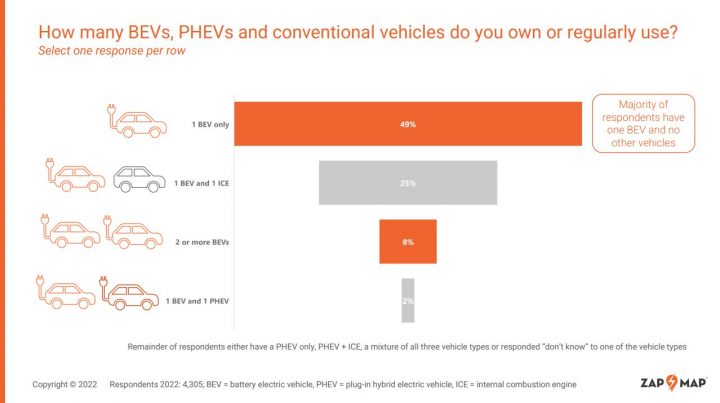 The type of journey electric is most likely to be favoured for is a local daily trip such as going shopping, the school run or eating out, for which 85% of the time dual fuel drivers will take the EV.

For commutes, 71% these drivers use their EV, and even for journeys of over 100 miles 67% will stick with electric. Even for UK based holidays, likely to involve long cross-country journeys reliant on the public charging network, a majority of 55% will leave the fossil fuel car at home.

The annual Zap-Map EV Charging Survey showed that most EV owners only own electric. 49% drive just one full battery-electric vehicle, 8% two or more and 2% own or regularly use one battery electric and one plug-in hybrid electric vehicle.

Satisfaction levels for electric vehicles remain higher than for petrol and diesel. Less than 2% of EV drivers want to return to petrol or diesel compared to 9 out of 10 who would not consider trading for a conventional car. Meanwhile the report shows 89% satisfaction for battery-electric vehicles and 83% for plug-in hybrid electric — both higher than 71% for petrol and diesel.