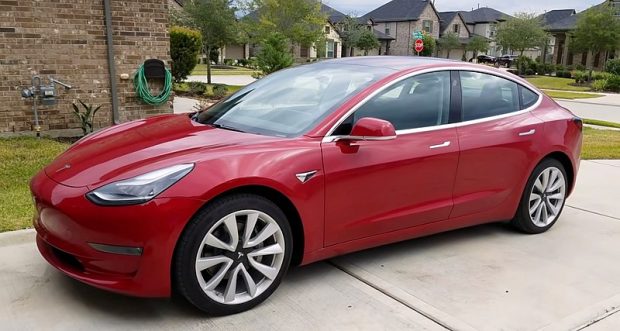 Electric car sales are charging ahead on British roads.

Figures from the Society of Motor Manufacturers and Traders  show ev registrations hit a record and hybrid sales last month were higher than September 2020, the previous best for the dual fuel vehicles. It’s also the first month that the Tesla Model 3 EV, pictured above, has been officially recognised in the figures after Tesla withdrew opposition to its ranking.

There are signs that companies have started to buy more hybrids and BEVs and are ditching diesel models.

RAC spokesman Rod Dennis said, “Despite the ongoing effect of the pandemic, when it comes to electric car sales March was a remarkable month – it was the best single month for sales of new zero-emission electric cars on record, beating last December by less than 100 sales.

“Plug-in hybrids also sharply rose in popularity, with the number sold 40% higher than in September, the last best month for sales.

“Fleet sales last month were particularly strong. Having a healthy fleet market for battery electric vehicles is vital, as these will be what end up on the second hand car market in the coming years. In turn, this will help ensure that cleaner vehicles are within the reach of many more drivers who have modest budgets.

It was the first month of “growth” for the UK car market since last August but it is also the anniversary of lockdown starting 12 months ago and which went on to slash the new car sales by 44.4%.

The sales slump this quarter has amounted to losses of about £1.8 Billion compared to 2020 and the SMMT says it will need 8,300 new registrations each day to return to the pre-pandemic levels by the end of 2021. 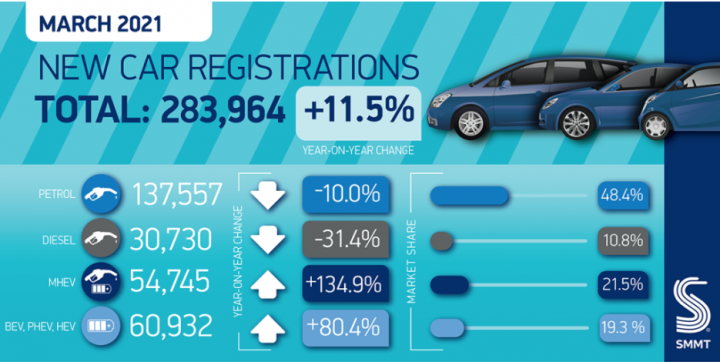 In Wales last month however there was a 11.14% decline in overall registrations, down to 9,289 from 12 months ago and in the first quarter of 2021 it has seen the steepest decline in the UK with over 25% fewer cars registered.

The UK total last month meant 283,642 were handed over to drivers, over 11.5% more than last March as the pandemic started to take hold.

Mike Hawes, SMMT Chief Executive, said, “The past year has been the toughest in modern history and the automotive sector has, like many others, been hit hard.

“However, with showrooms opening in less than a week, there is optimism that consumer confidence – and hence the market – will return.

“We know we will see record breaking growth next month given April 2020 was a washout, but a strong, sustainable market is possible if customers respond to the choice and competitive offers the industry provides within the safest of showroom environments.

“New plug-in models are already helping drive a recovery but to convince more retail consumers to make the switch, they must be assured these new technologies will be convenient for their driving needs and that means, above all, that the charging infrastructure is there where they need it, and when they need it.”