You are here: Home / Featured / Driving the dream – a car designed by a committee 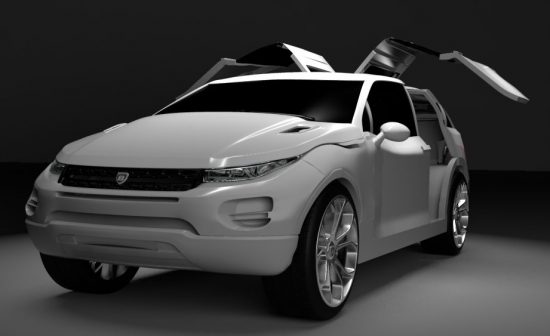 If you could design the perfect car, what would it look like?

That’s the question that the UK’s leading independent car specialists, OSV, asked 1,000 members of the British public and the results aren’t necessarily what you might expect.

The lights of an Audi A5, the wheels of a Range Rover Sport, and the grill of a Lamborghini Huracan; so far, so predictable. If you asked a man to design his perfect car, this is most likely what he would come up with. Colour it black, add in the practical but shapely roof of the Ford Edge, a handy hatchback and the wing mirrors of the Range Rover Evoque and you have a sensible, stylish and undeniably classy car, once the proportions have been reconfigured.

But, there’s still one part missing and that’s where it gets a little bit silly… It’s probably something to do with Back to the Future and dreams of driving Doc Brown’s DeLorean – possibly the coolest car ever conceived – but what it seems that most men really want when it comes to the doors of their motor is the raised wing design of the Tesla Model X.

It’s not surprising that women have their own idea of vehicle perfection, but what might raise a few eyebrows is that overall women favour a grey Range Rover design, only with a convertible Mercedes C Class Cabriolet rag top and the cutely curvaceous wing mirrors of the Mini.

While the Range Rover supplies the front fascia and lights, the female design is completed with the wheels of the BMW 3 Series and the infinitely more sensible doors of the Mercedes C Class.

We have come up with a hybrid car combining the tastes of both genders, from the doors of the Tesla to the wing mirrors of a Mini, hopefully proving that  there could be a car that suits everyone!

OSV joint-company Director, Andrew Kirkley, said, “I find the difference in male and female tastes when it comes to car design really interesting. Overall, I have to say that I favour the male choices, and it surprises me that women would opt for grey paintwork, although that may be a purely practical decision with grey showing less dirt.

“It seems that practicality very much governs female choices, with the soft-top option being the only nod to frivolity in the women’s car feature picks, while most men want something at least a little bit sporty. Previous OSV research has revealed that women usually have the last word in purchasing a family car, and perhaps that’s just as well with so many men hankering after the X-wing door – it may look pretty snazzy but can’t be that practical when you’re trying to bundle the shopping in in a Tesco car park!”