You are here: Home / Industry / Components / Deeside is pearl in Toyota production

Toyota Deeside is one of the last remaining internal combustion engine plants in Britain and there are hopes it will be the chosen site to build a new generation of eletric motors in the 2030s.

Toyota Motor Manufacturing UK marked 30 years of production at its engine plant in Deeside, this month and a celebration was held by the company who invited guests to the plant for a showcase of its operations and an insight into its progress towards achieving carbon neutral production within the next few years. 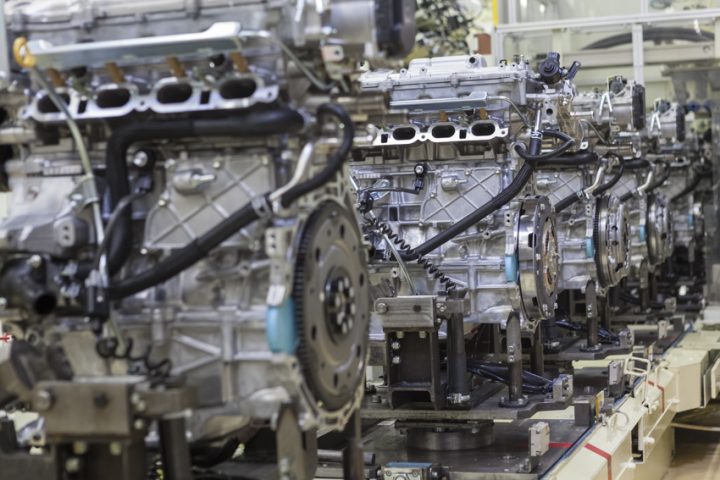 After its opening in 1990 it has supplied petrol engines to the Toyota vehicle assembly plant near Derby and has powered a range of models, the best known being the Corolla and Avensis series for UK and European markets.

However, its future remains unclear at this time with the banning of petrol and diesel engines in UK from 2030 and in a statement Toyota said, “The focus for Deeside remains on building superior quality products with their highly skilled workforce in a leading-edge environmental production plant, as they work towards their goal of carbon neutral operations.  There is sufficient business for the coming years and the plant needs to maintain a competitive position to win future business opportunities as they arise.”

The First Minister of Wales Mark Drakeford, UK Government Wales Minister David TC Davies and Matt Harrison, President and CEO of Toyota Motor Europe joined members of the Senedd, Alyn and Deeside MP Mark Tami, representatives from local authorities, organisations and businesses, suppliers and community representatives for the occasion, which included the planting of a cherry tree to mark the anniversary.

Since that time, Deeside’s activities have expanded and embraced new hybrid technologies, benefiting to date from £360 million investment and in 2010 it became the first location for the manufacture of Toyota hybrid engines outside Japan.

Today it directly employs more than 600 people and supports many more jobs in its network of local and national suppliers. Low emission hybrid and petrol engines are produced both for TMUK Burnaston and for export to Toyota production centres worldwide, including Turkey and South Africa.

With Toyota’s continued development of highly efficient electrified powertrains, Deeside is commencing production of engines featuring fifth generation hybrid technology. This year it is on course to build more than 250,000 units, taking its historic total to more than five million.

Visitors to TMUK Deeside were able to view vehicles and systems using these technologies that are being brought to the market today, including the all-new Toyota bZ4X battery electric SUV and Toyota’s hydrogen fuel cell vehicle, Mirai, but these do not use power plants from Deeside.

Established as one of the company’s global Eco Plants, it has successfully identified and introduced methods for reducing energy consumption and sourcing renewable energy on-site. Eighty per cent of waste from its production processes is recycled and reused to generate electricity and green hydrogen.

These and other measures, together with the co-operation of its partner and supplier businesses and other stakeholders, put TMUK Deeside on course to achieve carbon neutral production by 2025.

Mark Drakeford, First Minister of Wales, said, “I’m delighted to celebrate 30 years of manufacturing by Toyota at Deeside, the enduring commitment shown by the company to Wales and faith in the local workforce. It’s a milestone the company is rightly proud of and one that reflects excellence in all aspects of its operations”.

David TC Davies, Parliamentary Under-secretary of State for Wales, said the plant is a testament to the skill, professionalism and dedication of the workforce, adding, ” I very much look forward to their continued success.”

Matt Harrison, President and CEO of Toyota Motor Europe, swent on, “TMUK Deeside proved the perfect foundation stone for developing the strong, efficient and competitive Toyota manufacturing operations that today extend right across Europe. It remains a centre of excellence for production and a global leader in our mission to eliminate carbon emissions from all areas of our business.”

Tim Freeman, TMUK Deputy Managing Director and TMUK Deeside Plant Manager, said, “We remain focused on the competitiveness of our operations so we can build on today’s production landmark in the years ahead.”