You are here: Home / Features / Cycling / Converting cash into dreams for children 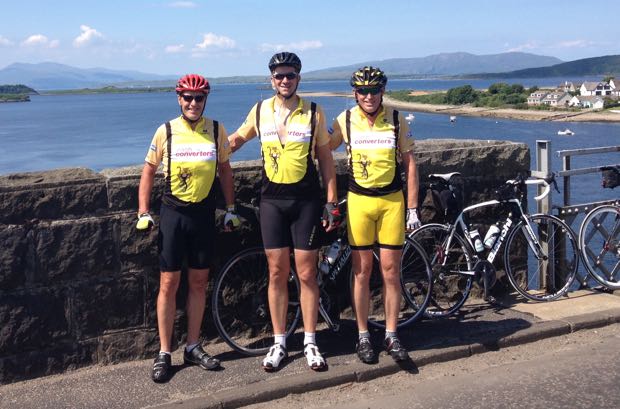 It will require the luck of the Irish and plenty of stamina as Welsh businessman Richard Addison tackles a notoriously tough charity bike ride across Ireland this week – all for a very good cause.

Richard, 63, a Rhyl Cash Converters Franchisee owner, is taking on the 510-mile route from Mizen in the south to Malin in the north in aid of the Dreams Come True charity.

Dreams Come True is a national children’s charity, whose mission is to enrich the lives of terminally ill children and young people living with serious medical conditions. Each dream costs in the region of £2,000 to fulfil and so far Cash Converters has raised over £250,000 since partnering with the charity four years ago.

Richard will be joined by fellow Cash Converter charity cyclists and businessmen Paul Graham and Carl Murray (above) on the six-day bike ride which ends on Saturday 23 June.

Richard, who lives in Prestatyn, said, “We raised a tremendous amount on our last epic charity bike ride from the Southern Toe of the UK to the Northern Tip; but this challenge basically stretches the length of Ireland and will require some serious hill and mountain climbing.

“We are up to challenge and have been in training for many months. It is incredibly rewarding knowing that with every mile we cycle, a child’s dream will come true.”

Cash Converters staff from all over the UK will be supporting the team in their fundraising attempts this week too. They’ll be selling raffle tickets in stores nationwide for the duration of Richard, Carl and Paul’s journey and beyond – up to 31 July. Tickets cost £2 and all the proceeds will go to Dreams Come True.