Santa Claus has new helpers he can call on – the latest SUVs from Jaguar and Land Rover, writes David Miles.

At the annual Christmas Ride and Drive media event held at Eastnor Castle Herefordshire by Jaguar Land Rover it was announced that the new Jaguar F-Pace SUV launched in April this year is not only Jaguar’s first ever SUV but it has become the fastest selling Jaguar ever.

Over 40,000 F-Pace SUVs have been sold globally with 7,200 going to UK customers since its April on sale date. So far the vehicle has attracted 1.6 million on-line searches for information by potential customers with 370,000 expressions of interest recorded. In the UK the F-Pace mid-sized five seater SUV now outsells Jaguar’s previous highest selling XE compact executive saloon range to take the brand’s number one sales position.

Meanwhile news from Land Rover that the new mid-sized five or five+two seater Discovery Sport has become the brand’s best selling model overtaking the Evoque. Over 100,000 global sales have been recorded this year, 22,140 of them in the UK.

Due to be launched in March 2017, the all-new fifth generation seven seater Discovery was put on static display at Eastnor Castle for the media to see. Already Land Rover has received 10,000 global orders plus 2,000 UK orders from the UK in just two months since the first information was released about the new range. UK prices start from £43,495. Since the original Discovery was launched in 1989 over 1.2-million vehicles have been sold. 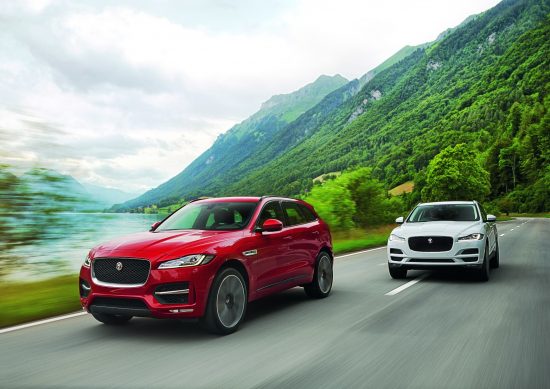 With over 40,000 global sales since its launch in April 2016, of which 7,200 units have gone to UK customers, the 2.0-litre 180hp Ingenium turbodiesel with R-Sport specification is the best selling version.

However having tried that unit this time I stepped into the 3.0-litre, V6 300hp turbodiesel with its eight-speed automatic transmission and AWD for a brief blast around the slippery rain soaked roads of rural Herefordshire. What better engine than this unit to try the handling dynamics of Jaguar’s first-ever SUV. The price of this version is £51,450 but there are less expensive versions starting from a shade over £35,000.

Although Eastnor Castle, the venue for JLR’s latest media event, is their historic home for Land Rover off-roading, the F-Pace is not really on off-roader – it’s more an athletic 4×4 for fast road work in keeping with its BMW X5 and Audi Q5 competitors.

With its lightweight but strong aluminium architecture the F-Pace offers a spacious five seater cabin plus a large 650-litre luggage compartment. Its refinement is superb and the list of specification impressive. After all it is a Jaguar but with a higher stance on the road and fully equipped with the brand’s latest infotainment and connectivity system operated via an intuitive 10.2-inch tablet style touchscreen.

But it is the chassis technology that makes the F-Pace probably the best handling crossover or SUV available today. It has torque vectoring and adaptive and configurable dynamics to provide a tuneable driving experience. The double wishbone and integral link suspension provides the core highlights of sharp handling whilst retaining a comfortable ride.

Whilst JLR’s own new generation of Ingenium 2.0-litre four cylinder turbodiesel engines are the mainstay of F-Pace sales the stronger 3.0-litre V6 300hp turbodiesel unit I tried gives the vehicle the real muscle power ideal for those long high speed journeys but it’s no less impressive and refined for in-town travel.

With 700Nm of torque it offers a huge punch of acceleration power taking just 5.8-seconds to go from zero to 60mph with an outright top speed of 150mph. The fuel economy is also not prohibitive either with a Combined Cycle figure of 47.1mpg. On my short test around the winding Herefordshire country roads the real-life figure was 34.9mpg and driving was effortless thanks to the smooth and seamless eight-speed auto gearbox with the AWD system shuffling grip to the wheels with most adhesion. With CO2 emissions of 159g/km VED road tax is currently just £185 a year and company car drivers will pay 31% Benefit-in-Kind tax. Insurance is a high-ish Group 42E.

Overall it is easy to see with the increasing public demand for SUVs why the F-Pace has been such a huge sales success for the Jaguar brand whatever engine is chosen. 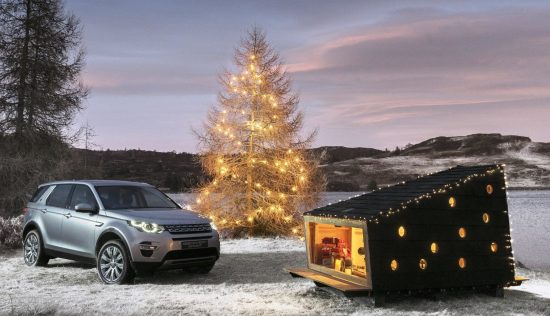 The fact that the Discovery Sport is now Land Rover’s best selling SUV range is a notable move and it will gain an important boost when the full-size seven seater all-new Discovery heavyweight off-roader arrives in March.

With the TILE function the Discovery Sport is the car that never forgets thanks to the tracking system. Important items such as wallets, bags, briefcases and even keys and phones using TILE tags, tiny Bluetooth trackers that can be attached to important items and used to track their whereabouts using smartphone technology.

Once the app is initiated using the central touchscreen customers are alerted if specified items are not inside the vehicle and are even able to get on-screen directions to their last known destination. Clever stuff but can harassed mums attach them to the children prior to the school run?

Also for 2017 Land Rover has added a new set of personalisation body colours to the Discovery Sport models. There is also the latest version of InControl Touch Pro infotainment with a larger10.2-inch touchscreen. Also added is a Driver Condition Monitor, essentially a driver alert system which sets of an audible warning if the driver appears to be suffering from drowsiness.

Another addition is an Intelligent Speed Limiter function which works in conjunction with the traffic sign recognition feature to detect changes to the prevailing speed limit.

All other aspects of the Discovery Sport are retained including 2.0-litre 150 or 180hp turbodiesel Ingenium engines, six-speed manual or nine-speed automatic transmissions and the clever computer controlled Terrain Response multi-mode all-wheel-drive system.

My latest Discovery Sport driving experience was in the 2.0-litre 180hp turbodiesel model with its nine-speed automatic gearbox with the HSE Luxury trim and equipment level priced at a hefty £43,400.

This constant move by Land Rover to push their model range more and more upmarket hasn’t always gone down well with UK owners who suddenly find themselves without a cost-effective replacement for their Freelander as an example so they have moved on to other less costly brands. But even so with the Discovery Sport now Land Rover’s best selling range how can we say they are wrong in their model line-up and sales strategy. Technology and higher levels of equipment cost more.

Back to the test drive model this is a vehicle equally at home on or off-road and it does its dual role without compromise. Off-roading in deep mud, wading through deep water, scaling seemingly impossible steep climbs it gets on with its without taxing the brain of the driver.

Just select the mode required, apply a little throttle and watch the magic happen as the computers shuffle power from wheels to wheels whether it’s a steep uphill gradient or a steep downhill track. On road the lofty body does incur some body roll during cornering but again the AWD system provides the grip to the right wheels at the right time and the ride is generally compliant.

The 180hp turbodiesel unit provides ample torque of 430Nm from 1,750rpm providing a top speed of 117mph with zero to 60mph taking 8.4-seconds. The official Combined Cycle figure is 53.3mpg and on my test driving around the Herefordshire country roads the vehicle returned a disappointing real-life figure of 34.1mpg.  The CO2 emissions are 139g/km so VED road tax is currently £130 every year and company car BIK tax is 27%. Insurance is Group 30E.

It is not the quietest or smoothest modern 2.0-litre turbodiesel engine on the market today or the most fuel efficient but it doesn’t seem to have reduced its sales potential. Potentially this best selling Discovery Sport priced from a little over £31,000 will provide some strong sales competition to the all-new and larger but even more expensive to buy and run, full-fat Discovery which arrives in March 2017 priced from £43,495 to £68,295.

Best thing is, Santa can put even more presents in that next Christmas.