Quintessentially British Aston Martin has never shirked showing us something different and making heads turn and that’s very much the philosophy behind the flagship DBX707 SUV.

Launching the marque’s new dedicated £250M factory at St Athan, 18 miles west of Cardiff, the DBX was the first SUV from this exclusive brand in 2020. 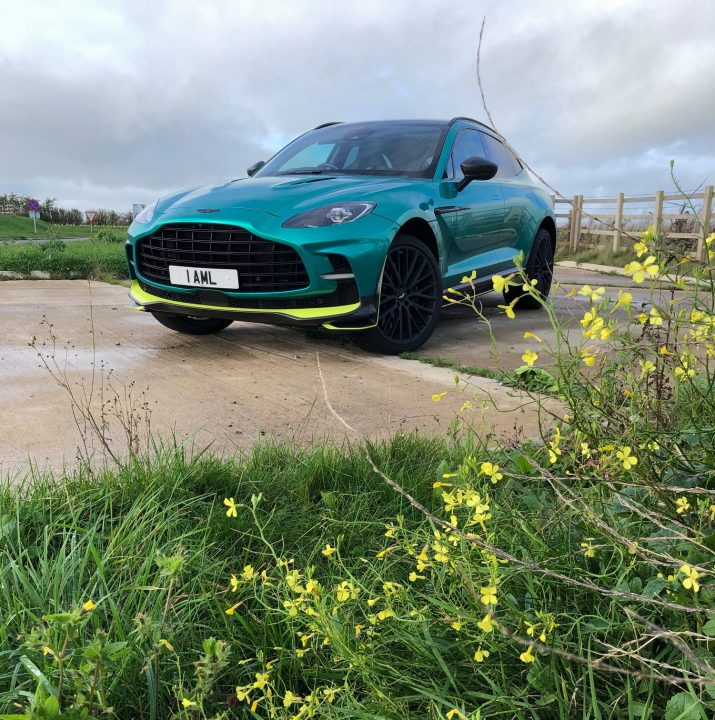 It sought to redefine the rich-family friendly SUV sector delivering a strong dose of sporting musk to the market, and it has become the brand’s best selling model series.

Now it has gone one better and added the more potent 707ps DBX to the line-up and seems certain to build on that initial success. 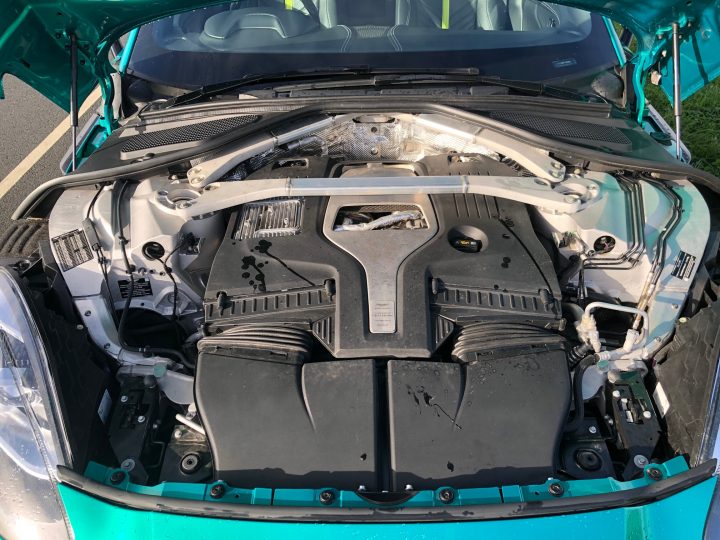 The launch models pushed out 543bhp but the DBX707 develops 697bhp, which is equivalent to 707ps, so that’s a big step up and Aston Martin’s engineers working with powertrain supplier Mercedes-Benz have worked hard to ensure the boost is beautifully integrated into the 2.2 tonnes SUV.

The raw power is impressive, but what’s more remarkable is the fluid form it takes when pedal is pressed to metal. It will knock you back in seats while simultaneously opening eyes and possibly mouths, but it’s all well controlled and with a lighter foot at times you can see a return of over 24mpg. 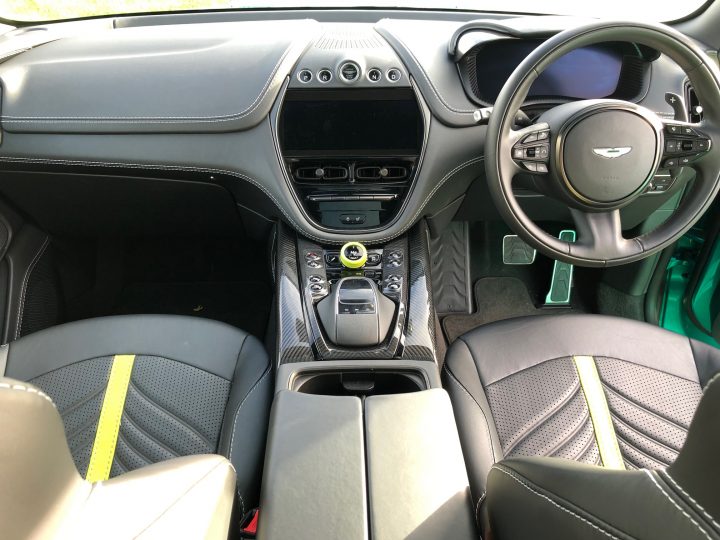 Hand in velvet glove with the power boost come revisions to the transmission, steering, brakes and suspension. It’s a complete package of performance and refinement with nothing left out of the mix.

The 4.0V8 engine is an instant starter with a rumbling note at first which gives way to a deeper roar as the throttle is depressed.

Take up is swift and there is an initial hint of turbo lag but once the engine starts spinning away you just hold on and enjoy. Gears seamlessly slip into place and speed rapidly rises with the legal motorway maximum just a modest tickover, hence the good fuel figure. 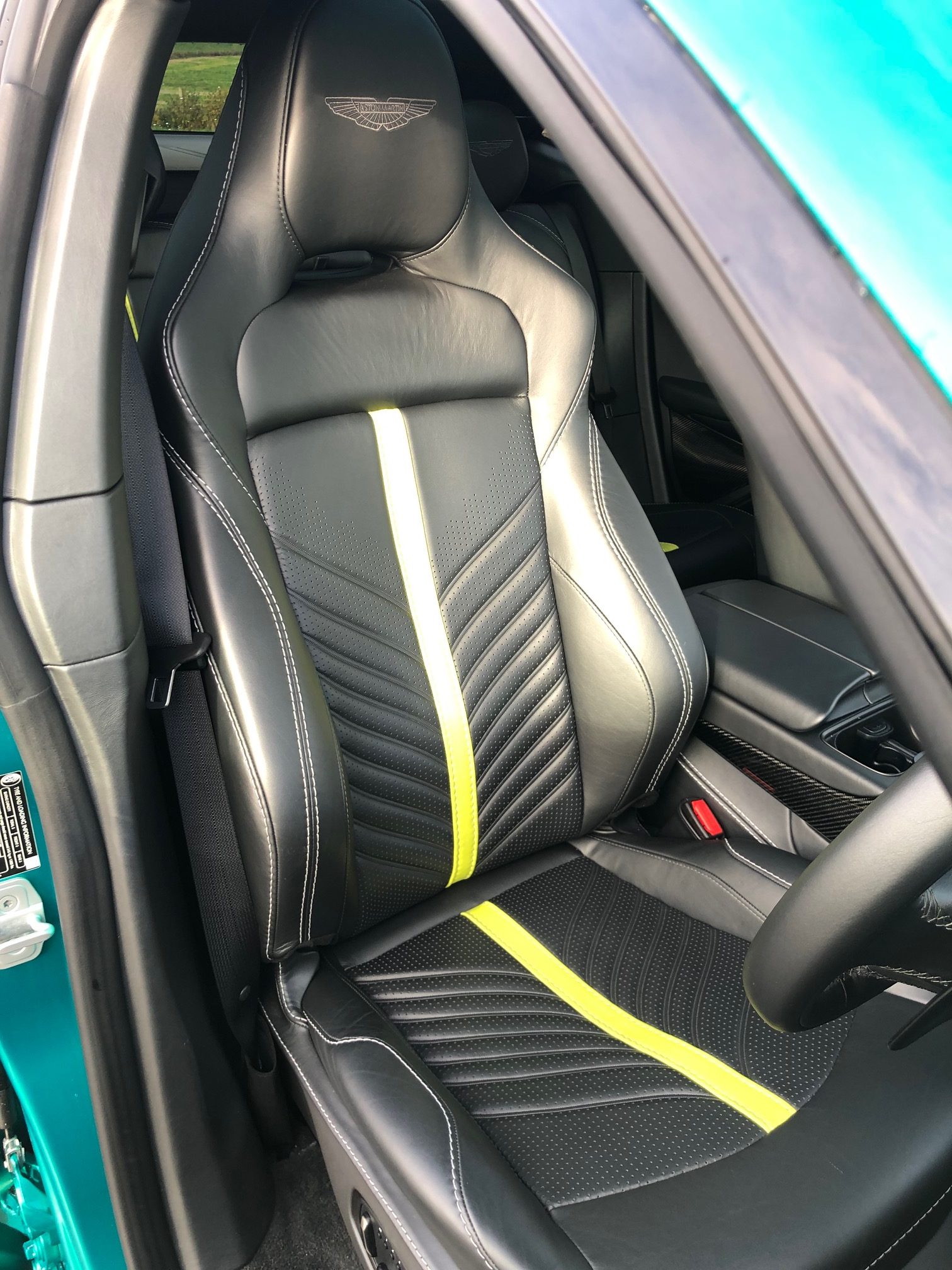 Where conditions permit you can stretch the sporting SUV’s legs and it never shows signs of strain, just gets on with the job while the driver and passengers relax and insulate themselves from the world whizzing by outside.

While the DBX707 does so well on main roads it also impresses on winding country roads where it stays firmly planted on the tarmac as the driver winds in the steering and eases off without any effort but a lot of feedback.

Should the need arise, the massive beefed up carbon-ceramic brakes inside the 22-inch wheels give immense stopping power with utter control to rest and the electric parking brake will hold the big boy on the steepest of slopes while instantly releasing when the throttle is used.

The front wish-bone and rear multi-link suspension gave a very progressive feel to the shock absorption and ability to corner at speed while keeping everything under control and irrespective of load but it also generated continuous road noise despite double-glazed side windows and sometimes it was firmer than preferred.

Thankfully, the big seats really soaked up any shocks coming into the cabin and the front pair had a wide adjustment range with good thigh and back support. Those behind also enjoyed deep padding, shaped cushions with adequate room for legs and heads. Everyone has to step up into the cabin but a nice feature was the ability to drop the car to ease access for users and to load luggage in the flat, wide and long bootspace under the high lifting fifth-door. Capacity is huge and boosted by an underfloor compartment. 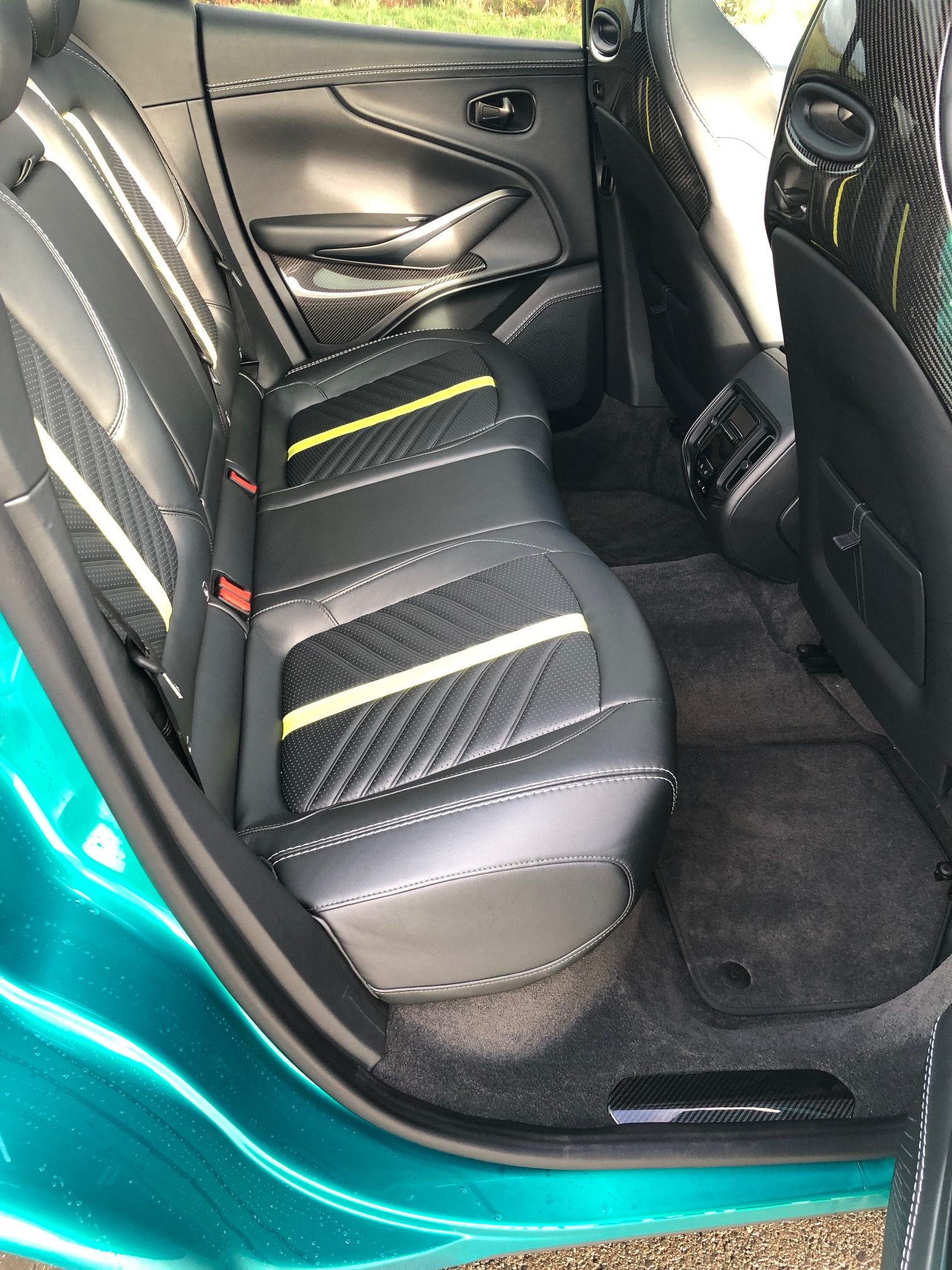 Inside for the driver and passengers the big familiar AM central display retains the push-buttons to select automatic transmission and opens up an array of modes to cater for ranges, roads and conditions.

Some surprisingly small dials cover the essentials for the driver and there is a selectable computer display. They were very clearly marked and easy to read at a glance. Buttons on the wheel-spokes, along the fascia and over the central console covered wipers, lights, car-settings and climate and all worked well, although I would have liked a smoother and quicker action with the ICE features. 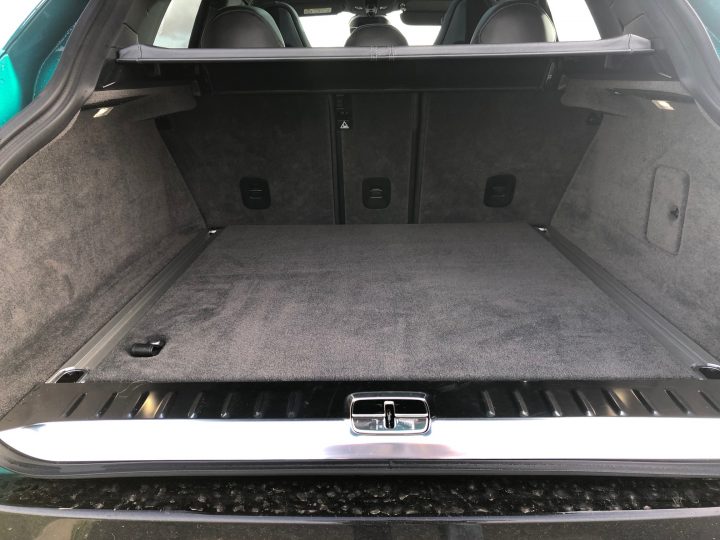 The DBX707 is fitted with a plethora of electronic safety aids and traction monitors, some of the brightest lights on any modern car and all-round cameras to help with pulling into traffic lanes or reversing up dark drives.

Despite the camera and sensor assistance there are some blindspots around this big car and you have to be careful when parking near low walls or posts, for instance, particularly if there are some active children in the area.

The Aston Martin DBX707 is possibly the best SUV they have produced to date, bringing sporting performance and flair to a market sector with only a few rivals, but like all fashion statements it cannot be left too long without some changes to keep it ahead and its crown unshaken at the top of this luxury range. 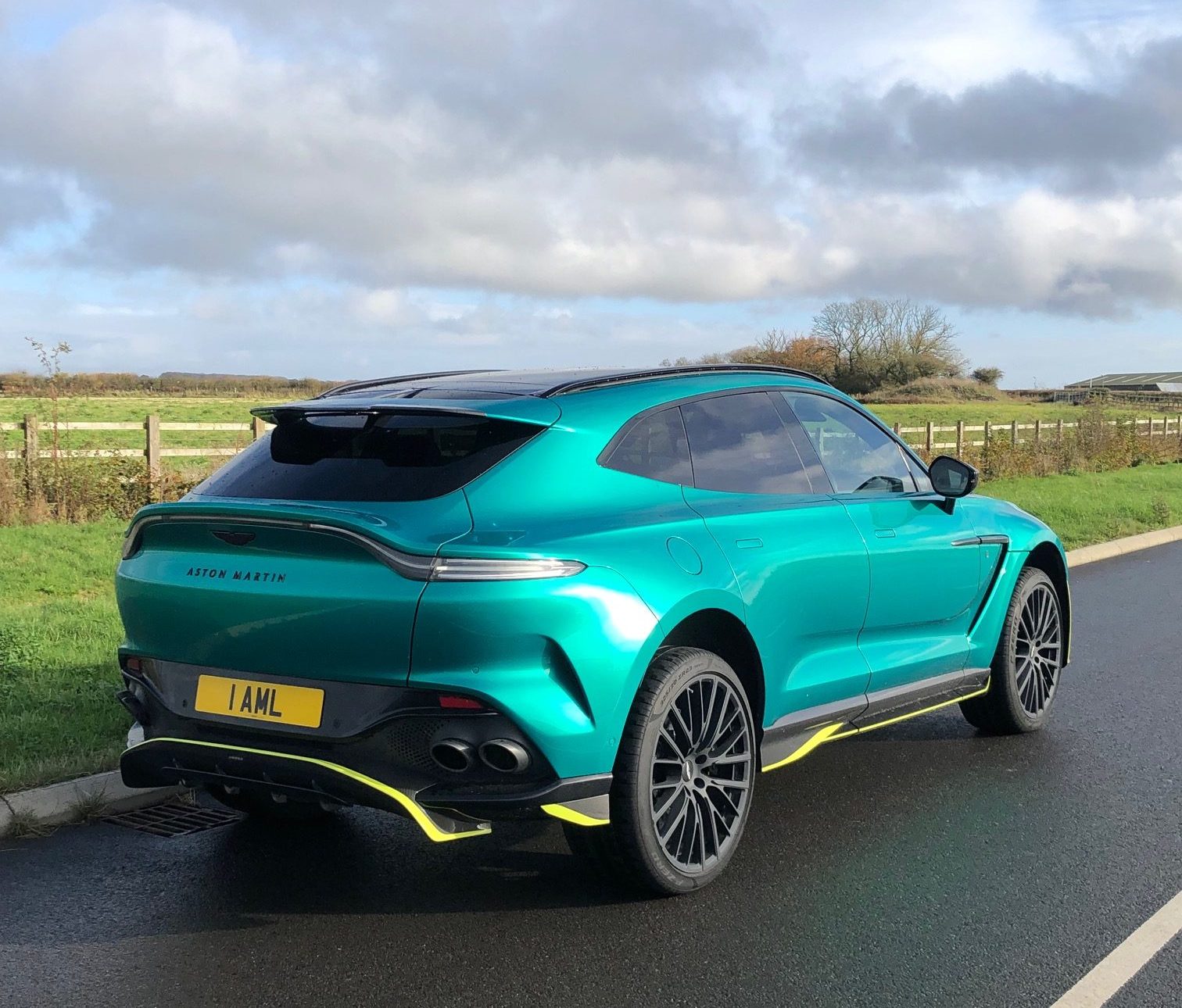