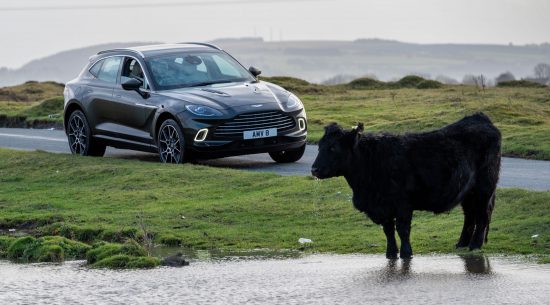 Aston Martin is a survivor in a world of hard knocks and is now looking for a smoother ride with their latest DBX sports utility vehicle.

After 100 years of making some of the most sought after sports cars in the world it has applied its knowledge to what it sees as a family car, albeit for a well off family.

Keen to blend practicality with performance and panache, there are very few rivals. It entered the market in 2020 against the Bentley Bentayga and Lamborghini Urus with little else to touch it except for the most expensive and upspecced SUVs from Germany’s heavyweights. 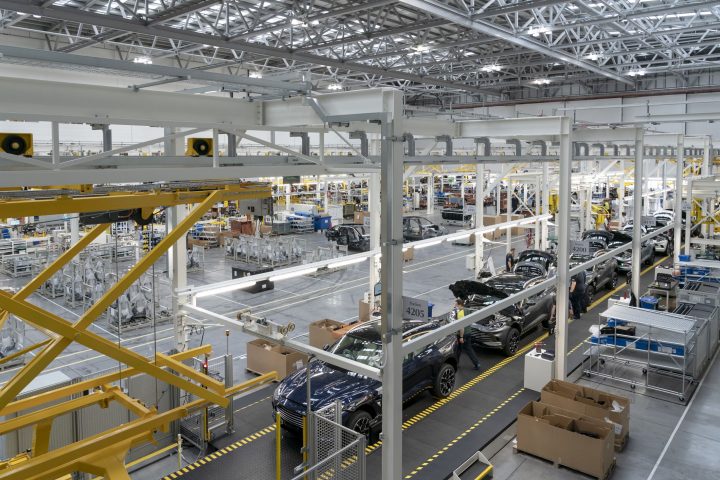 The DBX is the first product of Aston Martin Lagonda’s new assembly plant at St Athan, in the Vale of Glamorgan west of Cardiff , which has recruited about 700 employees to build the car and where there are plans to add new models in future, possibly from 2025, and these will have an electric powertrain.

Aston Martin had to do something to extend its modern range after its acclaimed sports cars simply could not find enough buyers to justify investments and cover costs and the SUV sector, especially at the upper end, is a good one which has space for exclusivity and individuality which the brand is famous for delivering. 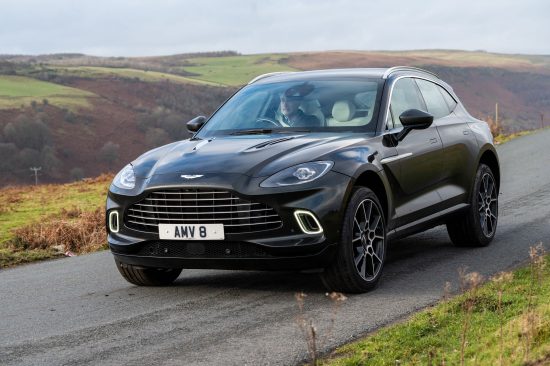 At the DBX launch in November 2019 the DBX immediately impressed with its curvaceousness concealing its size and abundant room for five in a truly luxurious cabin fitted out in quality leather, fine woods and composite detailing. We have only just had an opportunity to evaluate the exclusive DBX and it was worth the wait of over a year.

The size immediately impresses but it’s all done so well it can trick the eyes into thinking it is actually smaller than it is. The height and width seemed to be particularly right for the car while its distinctive Aston Martin grinning grille is eye-catching. 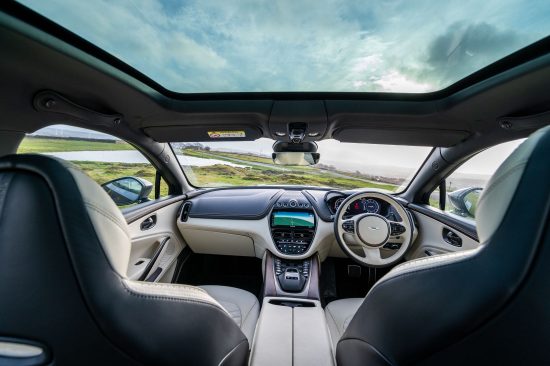 Open the front doors and a small kick-plate plaque tells you it’s built in Wales before your eyes take in sumptuous seating, chilled and heated on the test car, with its double stitching leading the eyes over the full width leather wrapped fascia.

The instruments are big and clear with speedometer and techometer housing dials for water temperature and fuel level and some clever multi-function displays between them displaying what the driver wishes for trip or fuel consumption.

The usual secondary controls for lights and wipers on stalk or buttons are close to hand on the wheel, the column or lower fascia, with windows and mirror buttons on the driver’s door and there are a few buttons on the console which needed a glance down from the road ahead. These select the mode responses and ride height which are then displayed between the speedo and tacho. A driver can choose to move out of the normal ride mode into two sport settings or two terrain settings to cope with anything the DBX faces, lowering or raising the vehicle in seconds.

Paddles on the column can be used if the driver does not want to let the nine-speed automatic transmission do its own thing, which it accomplishes with truly exceptional smoothness and speed whether going up or down. I liked the Sport+ mode’s throttle crackle when selected. 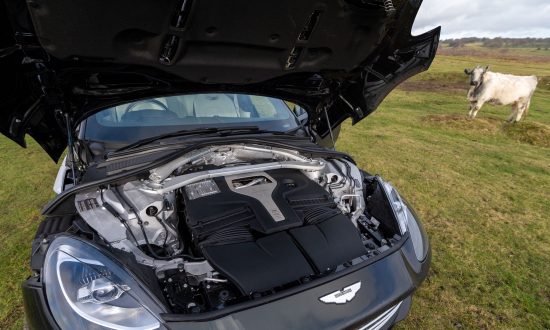 The bought-in Mercedes-Benz V8 4.0 litre petrol engine is incredibly smooth and a perfect powerhouse for the DBX, delivering immediate pulling power, sustained torque accelerting or overtaking and exceptional high speed cruising ability. You are aware of engine noise but it’s muted unless you open the throttle and has a lovely note anyway. 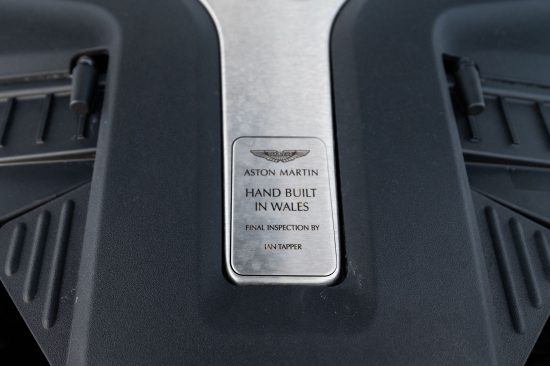 Up or downchanges are increadibly smooth and you never seem to want for a gear to do anything. Even in manual mode the selection is designed to show the driver to the best of skills even if they are not and all the time you have that wonderful response from the engine, in my case which carried a sign-off plate attributed to Ian Tapper. Well done Ian.

Aston Martins have always been renown for their handling if not their ride, but the DBX crosses the boundary and beautifully blends the two. This is a comfortable and capable SUV with sports car handling underneath whether in normal or sporting modes. I would have liked a smaller turning circle for urban use but it is fine on winding country roads and motorways and the enormous brakes provide extremely strong retardation with utter control and no drama.

Slowing and stopping is effortless and precise while the DBX’s positioning is pin-point on the road and there’s no rolling or pitching to deter a driver. Mid-corner bumps never threw it off-line and it was not unsettled by undulating roads or coarse surfaces. The handling was what I’d expect of a sporting Aston Martin, but with greater comfort complementing its composure.

The big 22-inch wheels and tyres really give it a firm footing for the permanent 4×4 system to do its best on slippery wintry winding ways and inspire great confidence, but they also generate the only real noise source in the car without extending the engine’s performance. Wind and other mechanical noises are absent or very low. 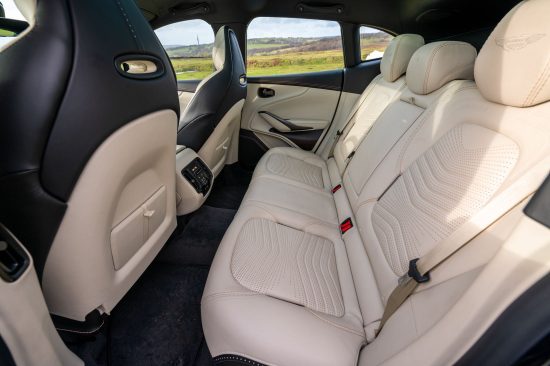 As mentioned, the DBX is a full five seater and a luxurious one at that with wide opening doors a little rise to get inside and a knee-height loadbed in the carpetted back which is a good shape and size. It’s easy to get loaded with seat-backs which can be released from the behind the tailgate to make the most of the split 40/20/40 set up.

The front seats have multi-adjustable electric settings including lumbar and the column adjusts for height and reach as well to precisely tailor the driving position to individual taste. The rear seats are less deeply shaped but still very comfortable and they all securely locate occupants during cornering.

Room is excellent throughout and the test car’s full length glass runroof is one of the biggest in any car while the powered windows and comprehensive heating and ventilation system make a very comfortable environment. 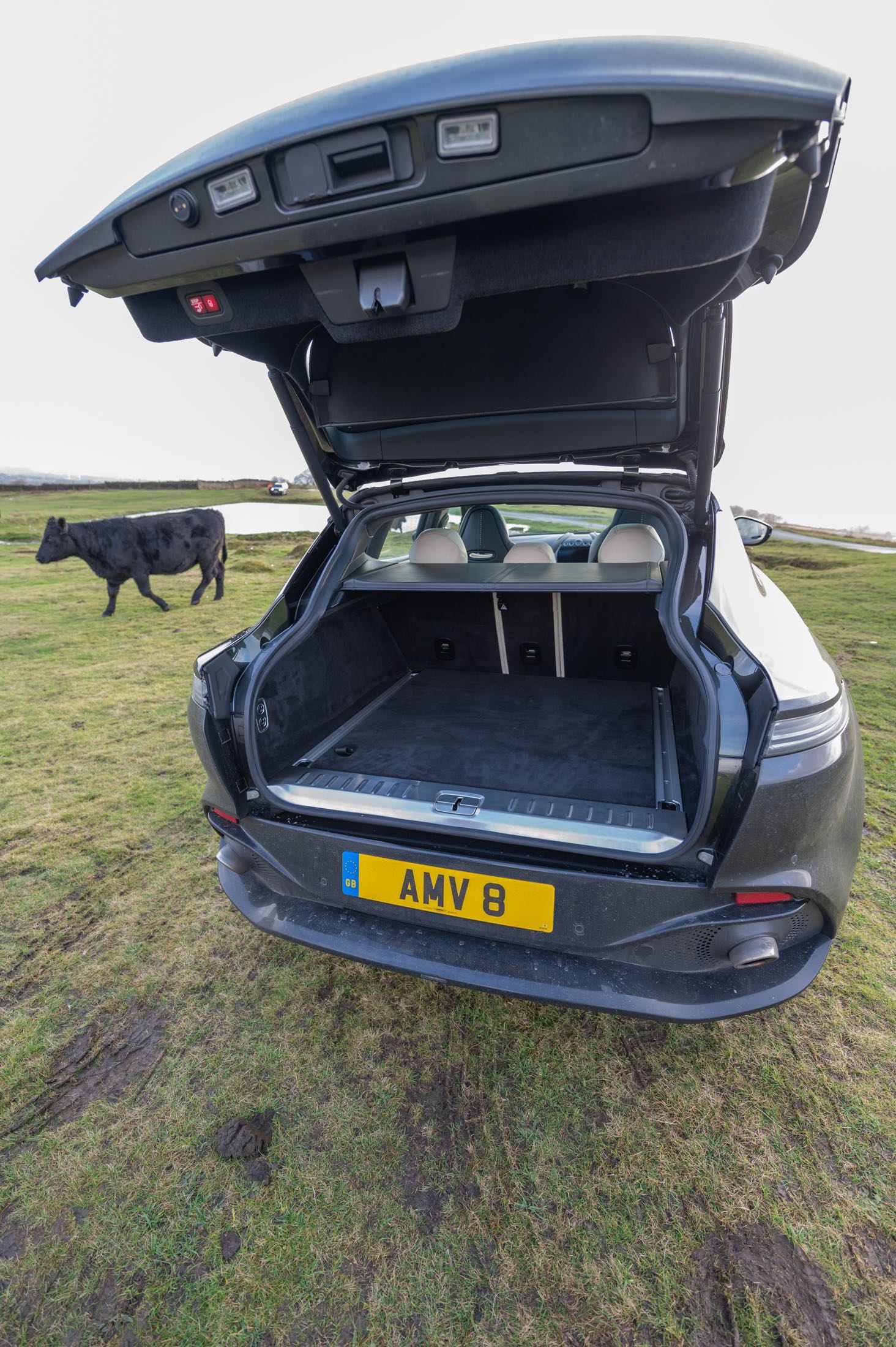 There’s good vision to front and sides as a result of the low waistline and big windows, intelligent headlights add a good measure of safety with their range and width and the front wipers quickly clear the screen.

Reversing can be a little tricky as the rear flanks and high tail need a cautious eye over them and the sensors and camera do a good job helping when parking.

In performance terms the DBX is very quick thanks to the use of lightweight materials for its integral chassis and body and it leaps into action with the lightest throttle pressure, stays planted on the road and gobbles up the miles.

Over about 260 miles we recorded between 22 and 26mpg, but heavy use pushed it down very quickly. Drive with some restraint on a motorway and you can expect to get near the top of this bracket.

Aston Martin has been very brave to enter the SUV sector but it will open up a new customer base for them and probably see existing owners buy one for their winter needs. 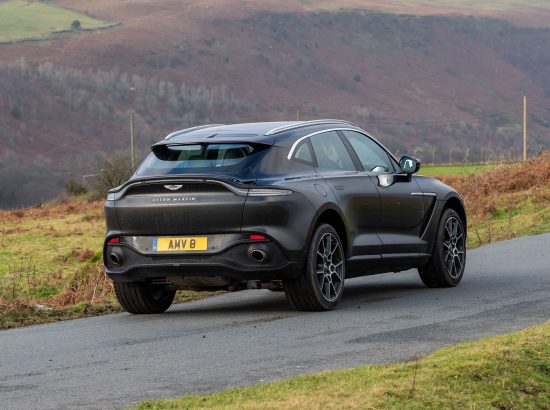 All that knowledge has produced a remarkable SUV by modern standards.

Whether or not the DBX will be the car of choice for Aston Martin’s best known driver, James Bond, remains to be seen, but it certainly stirs even if it does not shake a driver. 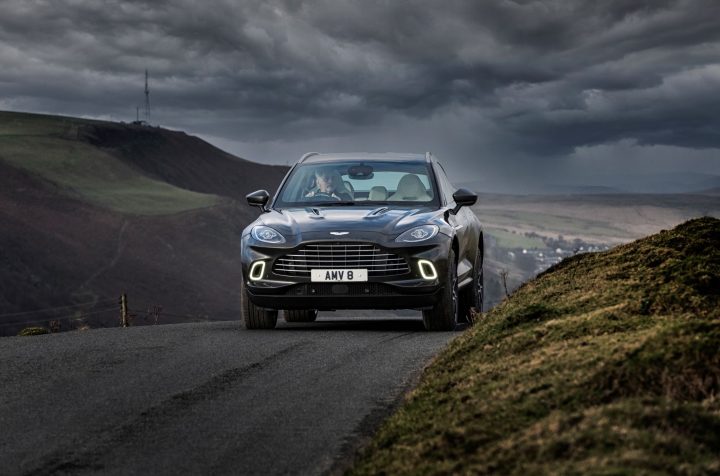 Against: Tyre and road noises, big to park, some blindspots, expensive to buy and run . 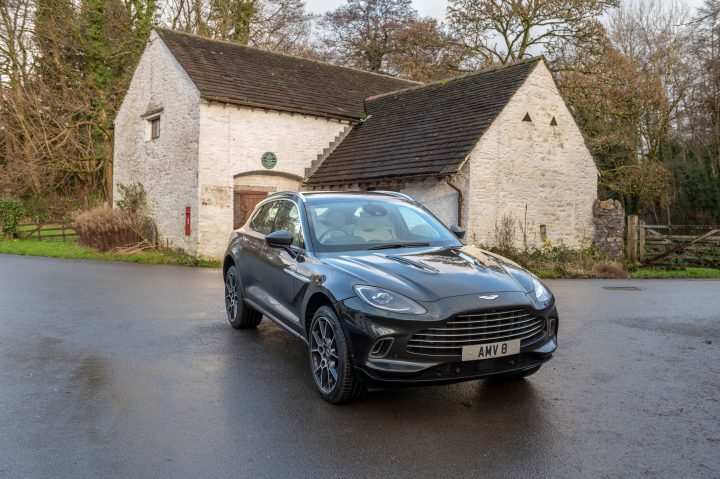