You are here: Home / Motorsport / 2019 / Chips are down for Woodpecker Stages 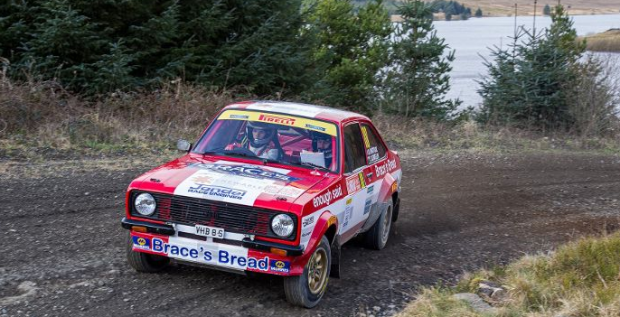 Competitors in the Pirelli Motorsport UK Welsh Forest Rally Championship start the penultimate round of the series, the Eventsigns Woodpecker Stages,  with most of the overall and class awards still to be settled this weekend, writes Peter Hughes.

The overall driver standings are headed by Tom Llewellin (above) but the top six in the table all retain at least a mathematical chance of taking the title. Tom had put in consistently strong performances throughout the season in his Historic specification Mark II Ford Escort. With competitors only counting their best six results from the eight Championship rounds, however, he faces a stiff battle if he is to claim the title.

Second placed Matthew Hirst has won one round of the series so far this season as well as claiming a runner up spot. He has a non-finish on the opening round, the Cambrian Rally to drop as well as a low score on round 5, the Red Kite Stages, and must be viewed as a strong contender in his Mitsubishi Evo IX.

Fellow Evo IX driver Russ Thompson may be in third place in the standings but he has taken two victories and two second places but has also had a non-finish along with a non-start so two good results in the remaining rounds could see him take the title while Scott Faulkner has only finished three rounds of the Championship, missing two events altogether in his Group N Evo IX and he retains an outside chance of overall honours.

So too does Group N Subaru Impreza driver Wug Utting and Talbot Sunbeam driver Chris Powell who is competing on home ground this weekend.

There are no fewer than eight co-drivers with a theoretical chance of taking the overall title in the category with co-driver to Matthew Hirst, Declan Dear leading the way. He holds a 14-point advantage over Andy Murphy, partner to Russ Thompson. A further 11 points back is Jim Lewis.

Wug Utting is leading Group N driver, 14 points clear of Ross Thompson with Scott Faulkner a further 30 points back. The standings in the co-driver category are mirrored by the respective co-driver, Bob Stokoe, Andy Murphy and Gareth Parry.

One title that has already been decided is the Junior driver title, sponsored by onethepacenote.co.uk, with Tom Llewellin’s impressive season long performance clinching that honour for him but just two points separate Gethin Price and Zak Hughes as they fight it our for the runner-up spot.

Tom Murphy is 10 points clear of Rhys Stoneman in the fight for the Junior co-driver title with Keaton Williams a further nine points back in third place.

Tom Llewellin has also clinched the RAVENOL Welsh Challenge for drivers, but second placed Josh Taylor is only three points ahead of Andy Fox in third with several more drivers still able to snatch the runner-up spot.

The RAVENOL Welsh Challenge for co-drivers sees leader Tom Murphy 21 points ahead of Simon Jones. Jones has just a single point advantage over Keaton Williams with Jessica Hockly only three points further back.

The Ludlow based rally, organised by 60 & Worcs Motor Club, could see a number of questions answered as far as the Championship is concerned, but the likelihood is that many more will not be resolved until the final round, the Wyedean Stages in November.