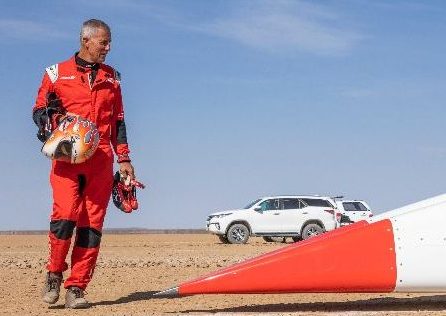 Covid-19 has puts the brakes on the Bloodhound Land Speed Record project it was announced today.

The multi-million-pound plan to smash 800mph on land to is looking for a new owner to take the team through to setting a new World Land Speed Record in 2022.

In 2019, the Bloodhound team deployed out to South Africa to conduct high speed testing of the most advanced straight-line racing car in history.

The car smashed the test programme target of 500 mph, hitting a peak speed of 628 mph (1011 km/h), validating the computer modelling used in designing the car and proving that Bloodhound has real record-breaking capability.

The team now needs to install the Nammo monopropellant rocket, giving the car a top speed of over 800 mph (1287 km/h).  Once again, the car will then run on its specially prepared 12-mile (19.2 km) long dry lake bed race track at Hakskeen Pan, Northern Cape, South Africa.

Completing the rocket installation and taking the car to South Africa to exceed 800 mph will cost £8 million, based on the costs of the test programme to date.

Bloodhound LSR’s current owner and Chief Executive, Ian Warhurst, is now stepping back from leading the project he saved from the scrap-yard in 2018 and putting the vehicle up for sale.

The current economic climate brought on by the global pandemic has severely impacted the search for fundraising and the project timeline.

As a result,  Ian is inviting a new owner to take over Bristol and Gloucestershire-based Grafton LSR Ltd, the holding company which owns the Bloodhound LSR project.

Ian said: “It has been a privilege to lead this team of world-class engineers over the past two years. I was spellbound – along with a huge audience around the world – as we tested the car up to 600+ mph in South Africa.”

Bloodhound driver Andy Green said, “In my opinion, the Bloodhound team has built the best Land Speed Record Car ever.

“It made our 628 mph test run look easy!  We’re now raring to get to 800 mph+, to showcase this technical marvel and to invite a global audience to join in an incredibly exciting adventure.

“After the horrible 2020 pandemic year we have all just experienced, the world needs a good news story, and Bloodhound is ready to deliver it”.