Ahead of the start of its 2021 season, the Bennetts British Superbike Championship has launched a dedicated channel on Motorsport Network’s OTT platform Motorsport.tv.

The channel will bring fans behind-the-scenes of the bike series, delivering insights from the paddock and highlights from every round of the championship.

Rider interviews and updates from the world of British Superbikes will also be available, making the new channel the place to be for any fan of two wheel motorsport.

This will help the Bennetts BSB Championship stay relevant and appealing in this new evolving digital age of motorsport.

This is the latest partner channel to be launched by Motorsport Network since the creation of the partner channel program last year and the first to cater for motorcycle enthusiasts. The Bennetts BSB Championship will join the FIA World Rally Championship, NASCAR, British Touring Car Championship, Race of Champions, Mercedes, Porsche, Lamborghini, Audi, Jaguar and W Series on the programme, creating a destination for motorsport enthusiasts on Motorsport.tv.

The world’s first live motorsport and automotive rolling news channel, Motorsport.tv Live, is set to be launched this year, delivering breaking news as it happens from around the globe, hosted from studios in London and Miami. 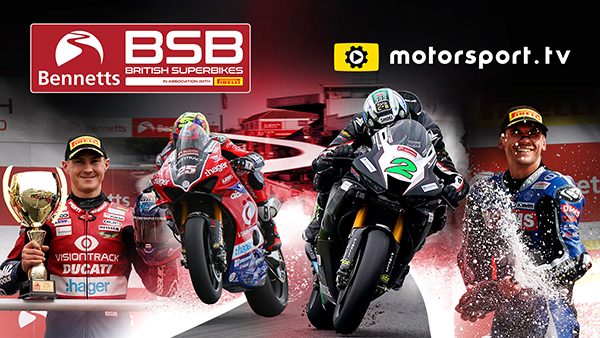