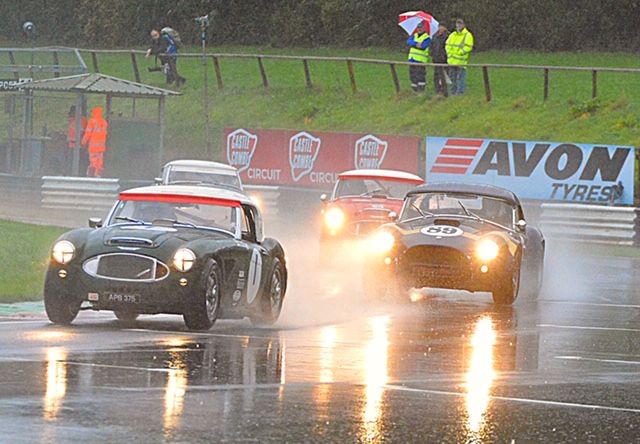 After being one of the first of the UK’s seventeen motor racing circuits to restart motor racing following the enforced COVID-19 lockdown, Castle Combe Racing Club successfully organised five meetings since permit restrictions ended on 30 June, in what has been a weird and truncated 2020 season.

The club’s own popular championships – GT, Formula Ford and Saloon Car – together with the successful  Hot Hatch series ran back to back races at four one-day meetings to squeeze an 8-race programme for competitors, with no dropped scores and all results counting.

This set of challenging dynamics ensured that 2020 was a meaningful championship for Luke Cooper – FF, Tony Bennett – GT and Mark Sutton – Salooncar to win.

Fifth race meeting at Castle Combe was the Autumn Classic on 3/4 October, with an additional day added this year to celebrate the well-liked west country circuit’s 70 th birthday. But with the best of intentions any thoughts of a glorious weekend of revelry were dashed by the capricious British weather and the meeting became a game of two halves!

Saturday was wet but drivers adapted quickly and racing was excellent on a 8-event card topped by the 90-minute GT & Sports Car Cup race for cars of the 1950s and 60s – a golden era in the circuit’s illustrious history – won after 56 hard fought laps of the 1.85 mile circuit by the well driven Lotus Elan 26R of Haddon and Wolfe, from Fisken and Franchitti’s Jaguar E-Type and Griffiths and Clark’s similar big cat.

The race included several of the west countries top historic racers in the quality field including Chris Clark and David Smithies’ Austin Healey 3000, a commendable 6thoverall in what is basically a 1950’s sportscar.

Sunday dawned wet again but after a sustained overnight rainfall on already saturated ground, the flooded runoff areas made racing dangerous for cars leaving the track at a number of points and requiring marshals to attend in water of up to 3’ deep.

Despite valiant efforts by the circuit and club team using motorised pumps, the difficult decision was taken at 11.00 am to cancel the day’s racing without a wheel being turned in anger on the – additional for 2020 – second day of the Autumn Classic.