You are here: Home / Newcomers / CV News / Welsh engineer flies to the rescue in Falklands 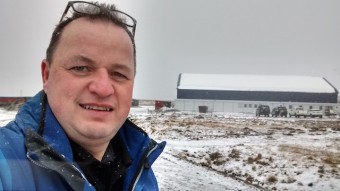 Freight Transport Association  engineer Wyn Skyrme was flown to the Falklands by the RAF to teach government transport staff how to maintain their vehicles.

Wyn was asked to deliver an HGV VOSA training course to transport department staff in an effort to implement regular vehicle checks and raise standards.

The Southeast Wales-based engineer, who has more than 30 years’ experience with FTA’s Vehicle Inspection Service, said, “There’s no enforcement, no MOTs and no test standards on the island.

“Drivers don’t come back to the yard for checks until their vehicle breaks down, but the workshop manager wants to change all that.

“The roads are stone and gravel rather than tarmac and there have been a few fatalities where trucks have ended up in a ditch. Investigations have shown problems like faulty brakes so he wants to set a standard that will hopefully end up being adopted across the whole island.”

Wyn, who has swopped his mobile inspection duties throughout Wales for a month in Tanzania in 2012 training the police how to carry out vehicle checks, was flown to the Falklands via Ascension Island by the Royal Air Force.

The government plant and vehicle workshop was closed so all nine staff could undergo four days of training followed by individual assessments, which Wyn says was enthusiastically received.

“I went through how UK and EU legislation works. They couldn’t believe how much policing is involved – there aren’t even parking tickets on the Falklands and the only fine is for breaking the 40mph speed limit.

“There are about 20 engineers on the island and they tend to swap jobs all the time so if a standard is established in the government workshop it should filter through,” he said.

HGV legislation, brake testing and calibration, MOT standards and DVSA inspection and procedures were among the elements covered by the course.

Wyn said: “I feel I achieved getting the message across to all candidates about raising standards and the importance of vehicle inspection. Workshop manager Ralph Harris is doing this off his own back and wants to create a standard where one doesn’t exist.”