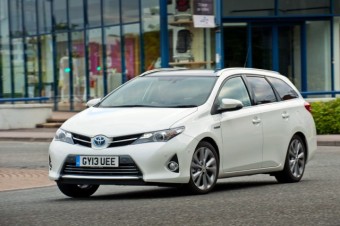 Toyota is launching the world’s first full hybrid compact estate in the Auris Touring Sports, along with traditional petrol and diesel powertrains as well.

Developed from the Auris Hatchback which was also the first family car with three powertrain derivatives when it appeared in 2010, the Touring Sports has a longer body to increase rear seat room and a low load-bed capable of stretching from 530 litres to 1,658 litres and the longest in its class over 2m.

Built in Burnaston, Derby alongside the Auris Hatchback and Avensis and using petrol and diesel engines from its Deeside, Wales plant, the new Auris Touring Sports goes on UK sale 1 July from £15,595 with the Hybrid Synergy Drive CVT costing £21,095 and rising to £22,845.

The 14 Active, Icon, Sport and Excel trimmed models include 98bhp 1.3 petrol, 89bhp 1.4 diesel and 130bhp 1.6 petrol with six speed manual boxes and sequential automatic transmission on all but the 134bhp 1.8 petrol Hybrid which is available only with a continuously variable transmission.

The 1.8 Hybrid emissions are down to 85gkm but the other end of the performance scale the combined petrol and electric motor can take it from standstill to 62mph in 11.2secs and onto a maximum 109mph. It can also be driven in pure electric mode without any tailpipe emissions and it also qualifies for VED exclusion.

Toyota decided to launch the Auris Touring Sports because estate car sales account for a quarter of C-segment registrations in Europe and three-quarters go to fleets. It hopes to see the addition of the spacious Auris TS lift its Continental sales above 5pc in 12 months.

Significantly, an estimated 45pc of Auris TS sales are likely to be the Hybrid which offers significant duty, tax, fuel and depreciation savings to buyers, whether fleet or retail. 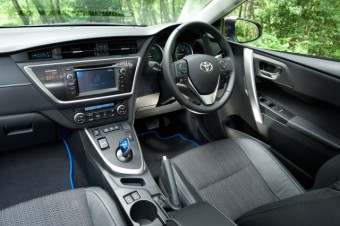 Externally, the Auris TS is the same as its hatchback stablemate but the longer body has a strengthened fifth door frame to improve rigidity and the rear suspension is either a torsion beam or, on more powerful versions, double wishbones.

This beam or wishbones set up gives the Auris TS a low floor and under it are more compartments while the hybrid battery pack is placed under the rear seat to better utilise space while also aiding balance and handling.

With the latest addition to the Auris range, Toyota has taken the opportunity to improve the steering, reduce noise, vibration and harshness and give the fascia a new look together with modern external LED lighting details and it gets a Euro NCAP five-star safety rating for occupant protection. 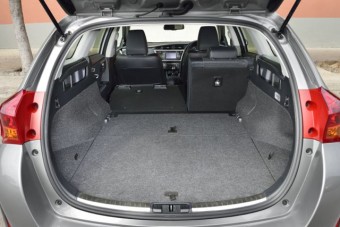 Depending on trim level, Auris TS features optional or standard intelligent park assist for parallel parking in a street and it senses a gap and lets the driver know if it is large enough before taking over the manoeuvre and letting the driver work accelerator and brake.

Jon Williams, Toyota GB president, said that he expected the arrival of the Auris Touring Sports to significantly change buyer perceptions and sales.

“The low emissions and running costs of the Hybrid Touring Sports make it particularly attractive to fleet buyers,” he said. “These are expected to account for about 60pc of the Auris Touring Sports sales and it will bring a new model to the market which offers more space, greater economy and much lower overall costs.”

He added that Toyota anticipate selling up to 4,400 Auris Touring Sports models in Britain in 2014 after 1,800 this year, and after the Hybrid the diesels will outsell the 1.6 petrol with the most popular specification being the Icon. At the moment, Auris Hatchback sales have hit 7,400 and are over 30pc above the same time last year with the hybrid version doing particularly well so the new Touring Sports is coming to market on the crest of a wave for Toyota GB.

The new Auris Touring Sports is a well thought out, practical and particularly roomy estate car in this sector.

The fifth door opens from knee-height and not too high so you have to stretch a long way to pull it down, but having said that it would benefit from a drop-down grab handle to assist shorter users. It is also reasonably weighted so it’s not too heavy.

The luggage cover quickly retracts and the 60/ 40-split back seats drop down easily and can be raised almost as simply. Oddments space is very good throughout and the access for driver and passengers is quite good unless you really need to open a back door very wide and the rear wheel arch restricts the opening. 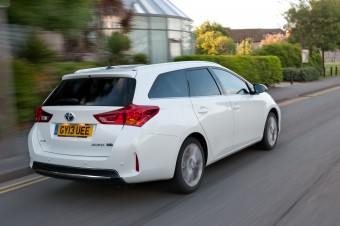 For an estate it rides well over indifferent roads, very well on good surfaces and it produces little road noise or suspension bump-thump. In fact it is generally quiet all round except when you press on through the upper rev range and its refinement is ruffled. Handling is safe but not exciting.

The 1.6 petrol is smooth and fairly quiet with a long travel clutch but short shifting manual six-speed gearbox and we averaged approximately 35mpg before we tested the sophisticated 1.8 Hybrid and saw our economy head towards 50mpg over a mixture of quick main roads, many twisting sections and a few kilometres of motorway.

Both cars rode well and their power came when pressed with little noise until you pushed into the higher rev range.

The thoughtfulness so evident in the powertrain and chassis was let down by a higgly-piggly arrangement of the features on the fascia with a cheap looking plastic finish to that and the central console, and a sat-nav and media display set lower than I would think ideal with small outlet vents for the air conditioning system.

For: Ease of use, roomy, practical, very smooth controls and compliant ride