Electric car sales are slowly rising but failed to turnaround a decline in total August new car registrations, according to the car-makers’ body.

The Society of Motor Manufacturers and Traders said today that UK new car registrations declined by -5.8% in August.

Just over 87,000 vehicles were registered during what is traditionally the quietest month of the year for new car sales.

While registrations to private buyers held relatively steady, down by 699 units in the month, demand from businesses of all sizes was much more subdued, with 2,650 fewer new cars joining UK fleets, down -5.5% on August 2019. Demand also fell across all segments except superminis, with the biggest declines in demand seen in the mini (-64.2%) and specialist sports (-41.9%) categories.

Most of the slowdown was due to a sharp drop in English dealerships but there was little change in Welsh showrooms while registrations rose in Scotland and jumped up in Northern Ireland by 6.6%. 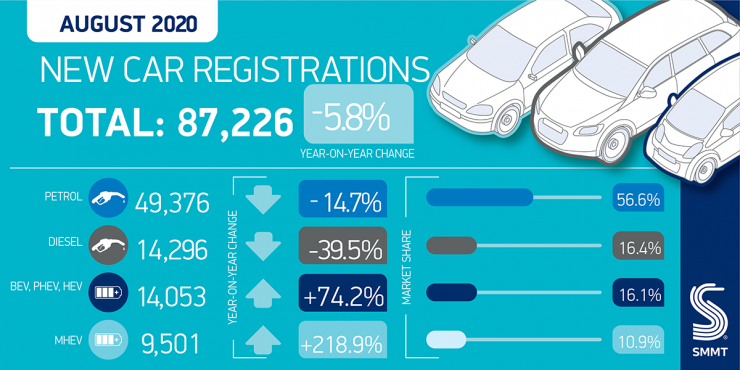 James Fairclough, CEO of AA Cars said, “July’s year-on-year increase in sales gave the industry a welcome shot of optimism, so it is disappointing that the upward trend didn’t continue into August.

“However, this drop in registrations shouldn’t cause too much alarm as September is traditionally one of the busiest in the calendar – with the market given a boost as new registration plates are introduced and dealers work hard to hit quarterly targets.

“September’s figures will give a more complete picture of how the new car market performed in the third quarter of the year, and may provide an insight into what we can expect for the remainder of 2020 too.

“He added,”But there is still a way to go. A few months of strong sales will bolster dealers’ bottom lines, but the threat of a second wave and broader economic downturn looms large. Now is the time for the industry to band together and work with the government to create incentives for consumers who are considering their next big-ticket purchase. This goes beyond just the motor industry – the road ahead for the car market will have ramifications for public transport policy, the climate agenda, and British trade.

“It’s also worth keeping a close eye on business car buying. While private sales have remained steadier with a slight 1.7% drop, business vehicles have plummeted 58% year-on-year. This is a core source of demand for the industry, and if businesses shut up shop or clamp down on costs, the impact will be felt for years to come.”

The UK new light commercial vehicle market returned to decline with a -16.1% decrease in demand. Just 19,407 vans and pickups were registered during what is traditionally the quietest month of the year for registrations.