Proving every picture tells a story, Welsh motorsport author Richard Jones has self-published a fascinating book from an idea provided by an evocative painting that captures just a brief snapshot from a hot and sunny May afternoon in the tiny Mediterranean principality of Monaco.

In fact, the original Nicholas Watts painting (below) proudly hangs on the author’s study wall in Penarth as both his inspiration, and canny investment! 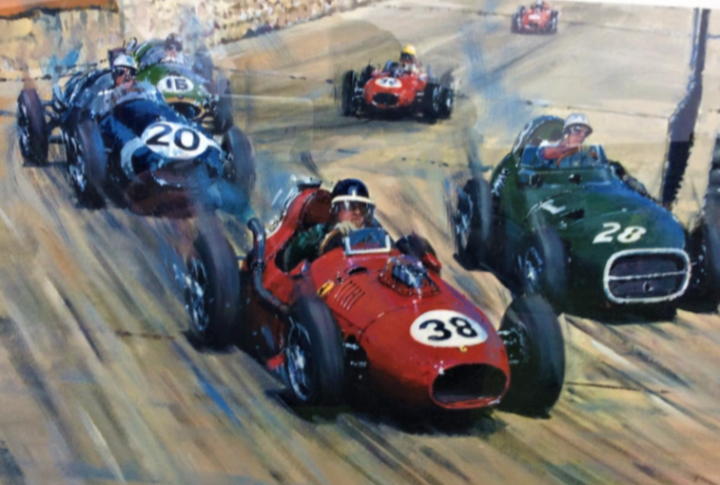 What was significant about 1958 was the sea of change sweeping through grand prix racing. It was the inaugural year of the F1 Manufacturers championship, and the traditional configuration of front-engine cars was switching to ‘horse pushing cart’ rear-engine concept, pioneered in the 1930s by Audi and Mercedes and post-war by 500cc motorcycle engine F3 cars, but now designers were latching onto this successful principle for fleeter, lighter, and sharper handling F1 chassis.

It’s difficult to imagine that at the start of the 20thcentury, Monaco was but a sleepy fishing enclave with little money or ambition to become a chic global tax haven. This all changed when his Serene Highness Albert 1, Prince of Monaco, in collaboration with young go-getter Anthony Noghès, devised the first Monte Carlo rally with several European starting points all converging on Monaco in January 1911.

During the 1920s depression Noghès devised the idea of a road race around the streets of the principality to help revitalize Monaco’s wilting economy and the first Monaco Grand Prix took place May 1929.

The 1958 version of the race saw 29 entries qualifying for 16 places on the 3-2-3 starting grid. Drivers included dashing tier-one heroes of the era together with a motley bunch of European aristocrats and wealthy or enterprising amateurs, including Bristol garage owner Horace Gould’s Maserati 250F, transported in an ex-Bristol city service bus!

After a grueling 3 hours and 195 miles, it was wine-grower and sometime F1 driver Maurice Trintignant who triumphed in a Cooper-Climax, from the Ferrari Dinos’ of Luigi Musso and Peter Collins. Mike Hawthorn’s Ferrari took the fastest lap, and the chequered flag was enthusiastically waved by former Monegasque F1 driver, Louis Chiron, who tried but failed to qualify for the actual Grand Prix! 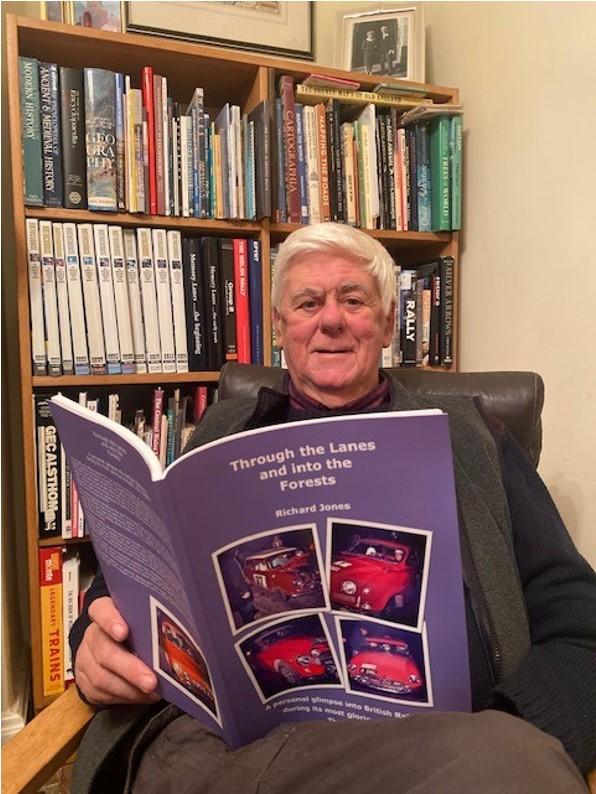 The well-researched and detailed book by Richard (above with another of his books) sets the scene for the race, reviews the 6 manufacturers competing before reporting on the race and outcome. Drivers get their own dramatis personae, as does the mode of transport used by some to travel between races. A stark reminder of the woeful mortality rate of drivers during that hazardous era of the sport is that of 16 drivers taking part in that race, nine would eventually die in accidents associated with motor racing.

In marketing terms, it’s a well-known fact that publishing colourful images of tropical palms, period racing cars or snowy Alps helps capture people’s imagination. This 52-page bijou book has two out of three of these and transported me nostalgically back to the small principality I’ve enjoyed visiting for Grand Prix or Rally. It’s a thoroughly enjoyable read, kick-started by an idea taken from a fine painting.

Available directly from the author hrandjmbooks@gmail.com the well-illustrated book, Every  Picture Tells a Story The 1958 Monaco Grand Prix, costs a modest £12.00 including P&P. Payment via Paypal to the email or BACS Transfer, details on request.