You are here: Home / Roadtests / Weekend roadtest: Volvo V60 is not just a number 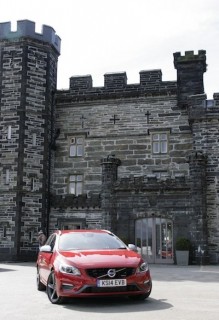 The Volvo V60 is not just a number.

A 300-mile round trip to Festival Number 6 at Portmeirion, Gwynedd, in North Wales, was the V60’s proving ground during the road test.

Sweeping across hills and rolling roads, plunging the 2.4-litre car through tunnels carved into Snowdonian mountains and roaring it around farm traffic with a quick tap at the tiptronic paddles was an absolute delight.

The V60 blistered through every challenge thrown at it – and never once felt like it was being pushed at all.

It also sat very comfortably with its brothers and cousins, the XC60’s and C40’s at Festival Number 6, where Volvo were sponsoring and offering VIP services to headliners and special guests, allowing for ease of passage through the festival – providing you parked between two other Volvos, disguising the fact that the side panels didn’t bear the sponsorship decals. Seeing the models side by side demonstrated just how sharp are the Volvo designers’ eyes for a suave-looking car.

Initially, I thought it easier to point out where the V60 falls short rather than what makes it so great.

Perhaps I could talk about how the radio skips over stations, and fails to find others.

Maybe the Bluetooth system was too fiddly and I had given up trying to pair my device, and the ratios in the auto gearbox were hesitant and threw me nose-first into the steering wheel upon finding the appropriate gear. There must be something wrong with this vehicle – surely…? 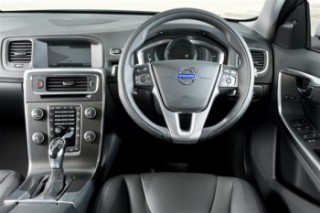 The higher-end model has every feature you could ask for and a tempting options list to add just a few more. It took me a short while to work out what the four orange lights were glowing and fading into the windscreen just above the wheel. I quickly learned their purpose when attempting to overtake a caravan, dipping into a low gear.

Four orange spots became ten red ones, accompanied by a loud beep as the V60 slammed on the brakes firmly – thinking in such a gear at that speed that I was about to introduce a new 14- plate Swedish family estate car to the furnished interior of an unsuspecting family’s motor home. Instead, the V60 recalculated and allowed me to overtake comfortably and safely.

Common complaints say that the 430 litre boot space is poor in comparison to competitors, but in the back I managed to fit a two-man tent, personal suitcase for the weekend, a bag full of coats, camping provisions, film art, a flat screen TV, and a box full of limbs (don’t ask) – all the while not sacrificing any space in the very ergonomic and accommodating driving space. It does expand to 1241 litres maximum. 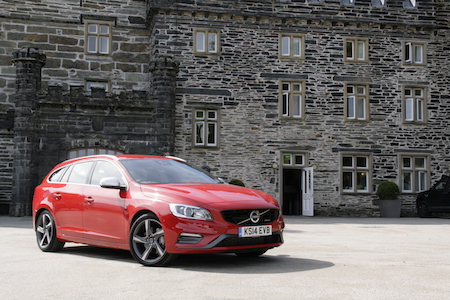 It certainly does have a lot to offer against its competitors, the Audi A4, Mercedes C250. And need I mention how good it looks?

Just like it’s rivals, it is up to scratch aesthetically – making an exhilarating seven-hour rive through Brecon and Snowdonia just as comfortable as a ten-minute run to drop the kids to school.