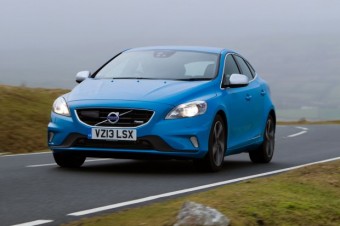 Volvo has been forward looking and given its range a very modern style to build on the long held reputation for safety and family friendly cars and the latest to get the treatment is the family-sized V40 series.

It’s a big range to cater for as many tastes as possible, and it’s going to get bigger still, but one of the anticipated best sellers is going to be the model we tested, the V40 D2 SE, with its 1.6 litre diesel engine and manual six speed box.

The least powerful of the engines in the range, the 1.6 does nevertheless pack a reasonable punch when you have a full load and make sensible gear choices to maximise the available power.

You can easily average about 50mpg and you still have strong acceleration from standstill and within the power band and gear ratios under hand the mid-range acceleration is good. But you pay a price in terms of noise levels rising considerably the more you push it.

The steering is not as communicative as I would like despite having a chunky wheel which gives it a reasonably compact turning circle and there is no vibration at speed or kickback over bad roads.

Underfoot, the brakes do a very good job of quickly and smoothly slowing and stopping the Volvo V40 and the conventional handbrake lever ensured it never rolled back on a slope although it was obviously set up for left hand drive markets as it was immediately beside the front passenger seat and not the driver’s seat.

Fairly conventional secondary controls stalks were big, operated smoothly and were backed up by fascia main switches for lights and a multi-mode panel on the central console serving entertainment, media, telephone, and individual ancillary settings, as well as heating and ventilation. It was very neatly done and straightforward. 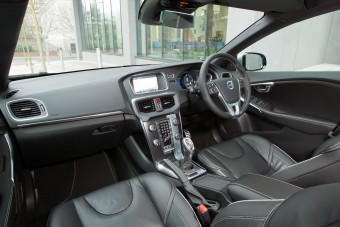 Instruments were directly infront of the driver and comprised a not particularly detailed speedometer, flanked by tachometer and eco-gauge with gear-shift indicator and very poorly calibrated fuel gauge outside them.  In the centre of the speedometer is a multi-mode display for such things as fuel, distance, and safety related items and operated through the stalks buttons. The key slot and start/ stop button is between the left of the instruments and the central display panel hidden behind the thick steering wheel rim.

Oddments space is plentiful with the usual door bins, central console box, trays infront of and behind the “flying console” , a big glovebox and seat back pockets. There is only a small rear window shelf but a pair of trays on the outside edges of the back seats.

Boot space is good, with a low loading edge, an underfloor tray, and the shape is almost square. 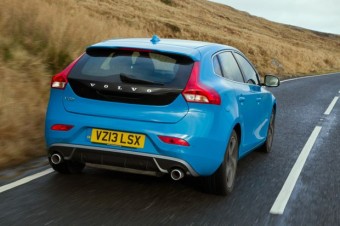 Access for driver and front seat passenger requires one to duck your head or hit it against the sweeping low roofline, but its unobstructed for the three it takes behind. Once inside, the room is good with plenty of front adjustment possible and all the seats were very well padded, shaped and supporting.

Ride quality was good considering you could hear how busy the suspension was coping with road bumps and dips, but just occasionally it would crash through to the bump stops. It did not wallow or pitch over undulating or twisting roads.

Grip was generally surefooted and the handling was unchallenging if a little too dead to the driver’s hands. Press on and it would take a wider line, but ease off and it gently came back without any drama.

My only real gripe with the new Volvo V40 D2 SE was that for a car with so much forethought put into it and safety features which included automatic city traffic braking and even a speed limiter, that the designers have had too much of a say and actually created a car which could injure.

That may be the way the occupants bang their heads when getting in, or more potentially seriously hit some-one or something behind the high rear waistline when reversing because the letter-box type rear window and think c-pillars create big blindspots and rear parking sensors are options when they should be standard.

Add to these elementary errors the poorly calibrated speedometer and fuel gauge, and the hidden ignition system, and you can see it may look good but it’s not good to live with.

Volvo has moved up market with the new V40 and into a very tough sector of premium models yet it no longer has exclusivity of safety engineering upon which to rely for its unique selling point as rivals have also raised their game.

It’s an improvement over the old series for Volvo lovers but the issue remains: is it is good enough to win over new buyers to the brand who don’t want to look behind but simply say “look at me”?