Volkswagen is an inherently conservative car maker which has thrived on compromises to please its customers and its latest line up is no exception, but excels nevertheless.

Broadly similar in style to its Volkswagen crossover stablemates, Taigo actually falls between the shorter T-Cross and larger Golf-sized T-Roc in dimensions and a lot of the space is put to good use with a bigger boot. 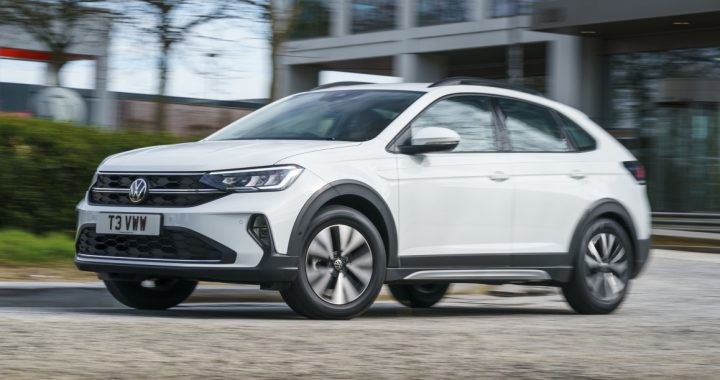 Volkswagen has poured through its parts bins and utilised petrol engines from the T-Cross and Polo and offers both manual or automatic transmissions in five, six or seven speed configurations including a dual clutch automatic. There are no diesel engines in the range.

Our test car was the entry level Life specification but you can move up to R-Line and top Style versions with more power as you pick your way through the list from mid £20K to about £30K and all are five-door desgns.

It is the first VW SUV coupe in the modern style and built in Spain although it’s closely related to the Brazilian Nivus model but comes with a high specification for driver and passenger safety as well as creature comforts. 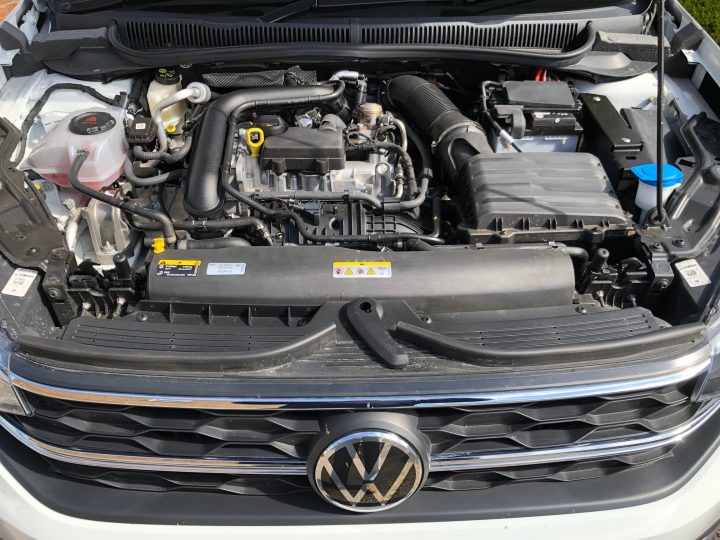 That means it gets a digital cockpit for clarity and permits different functions to be easily displayed according to a driver’s preference. The accompanying infotainment display operates most secondary features but thankfully there are push-button shortcuts which keep down distractions.

It is compatible with mobile phones operating systems and the VW ID feature so you can work your way through familiar functions.

Volkswagen Taigo users ride higher than in a Golf and it has a better ground clearance as well for those who may need it in country areas or wintry roads but it’s only front wheel drive. Entry level model has a 95ps triple-pot engine of about 1.0 litre but you can specify a 110ps version which comes with six-speed manual or seven-slot DSG automatic. Top models can also be ordered with a four-cylinder 1.5 litre 150ps engine. 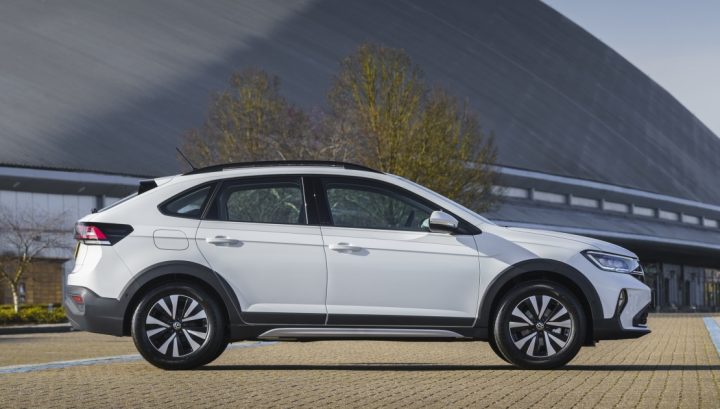 It’s always interesting to test the entry level model in any new cars’ range because the technology which underpins all of them can be found often at a more attractive price in the starter version and that’s the case with the Volkswagen Taigo Life 1.0 95ps.

The German brand has never been cheap compared to challengers but the Taigo now looks better value for money than some rivals.

It’s powertrain was very willing to perform even if it was not road-burning or particularly flexible, but within its five-speed limits it was easy to drive and very economical over a mixture of main roads and motorways. It could keep up with the flow on main roads, needed careful judgement and anticipation for overtaking and some long motorway inclines would drag down progress and mean a downchange was necessary if loaded. 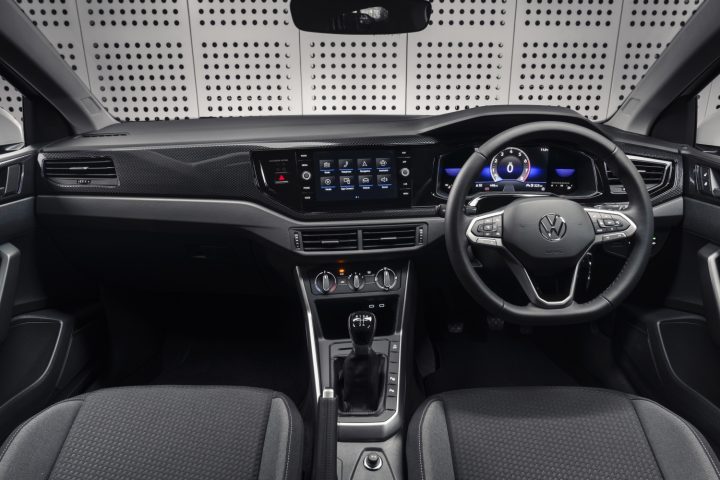 The little engine fairly buzzed away in an excited manner in a sort of let-me-at-them endearing way and the direct gearchange under a light footed clutch meant urban progress was effortless.

The steering was an excellent balance between effort and execution with good feedback, a compact turning circle and no vibration. Brakes were also smooth and progressive and the handbrake securely held the 1200kg car on our test slope.

Secondary controls grouped on the wheel-spokes, across the fascia and on the central console were well marked and worked with satisfying precision while the digital instruments’ panel was always clear, well marked and left nothing to doubt. The central multi-purpose screen was sufficiently large to not struggle to see anything and we liked the short-cut buttons for ease of use. 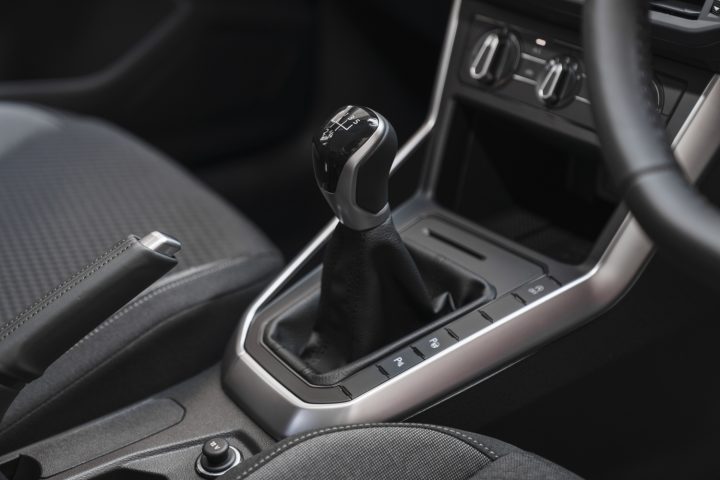 Heating and ventilation was straightforward, well controlled and abundant with powered windows to back it up and it soon demisted and kept the interior at our desired settings.

Oddments spaces were reasonable but not abundant for a family car, however the boot size, shape and access was excellent and capacity more than doubled if the offset split back seats were folded down. For driver and passengers the doors opened wide and you did not have to duck heads too much to slip into the seats, which offered excellent support to thighs and back and came with a fairly good adjustment range so head and legroom were good throughout despite the coupe roofline flowing down the c-pillar. 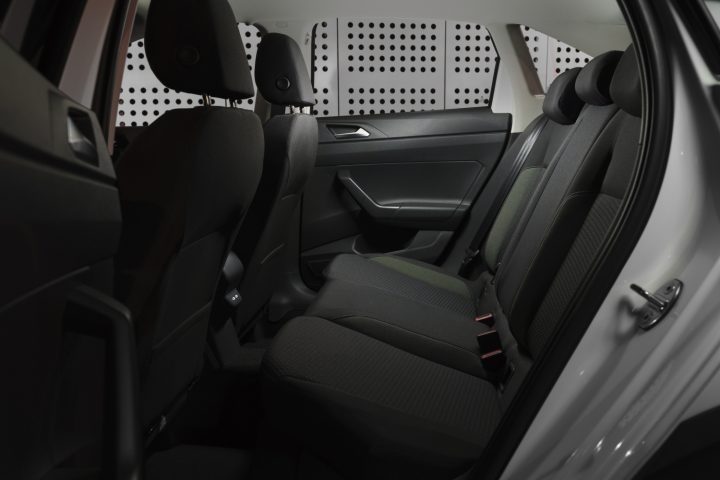 Infront or back the interior fit and finish of the test car was really good and just enough relief was given to wrap around fascia with its soft dark plastic trim which helps keep down packaging costs.

Riding high generally improved all round vision with a low waistline, slim pillars, good wash/ wipe system and very good LED lights. Sensors back up the displays on screen.

Ride comfort was surprisingly good for anyone who remembers the Volkswagens of just a few years ago and our Taigo soaked up potholes and ridges without complaint, very little roll around bends, without pitching or dipping evident. 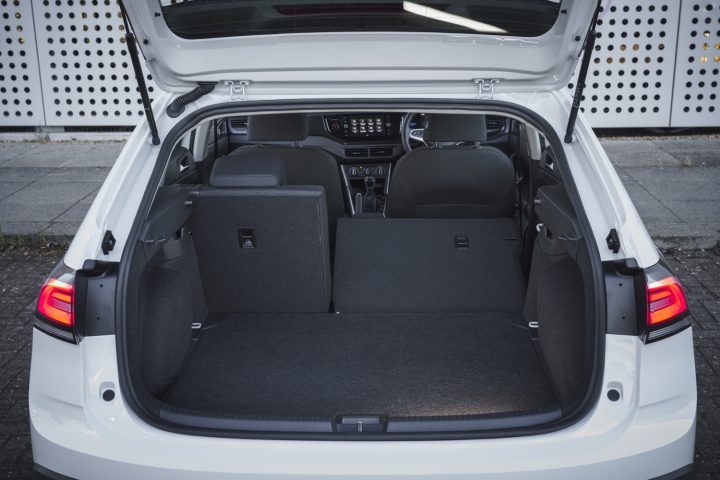 Noise levels, however, were intrusive from that hard working little engine or the road generated rumbles through the suspension system and it encouraged the driver to carefully pick a patch between the roughest bits and to get into a high gear as soon as possible.

This did help the economy as a result even if the package struggled with four aboard.

It is one of Volkswagen’s latest models and undoubtedly one of the better modern SUV coupe crossovers, so worth a test drive in a world where compromise dominates. 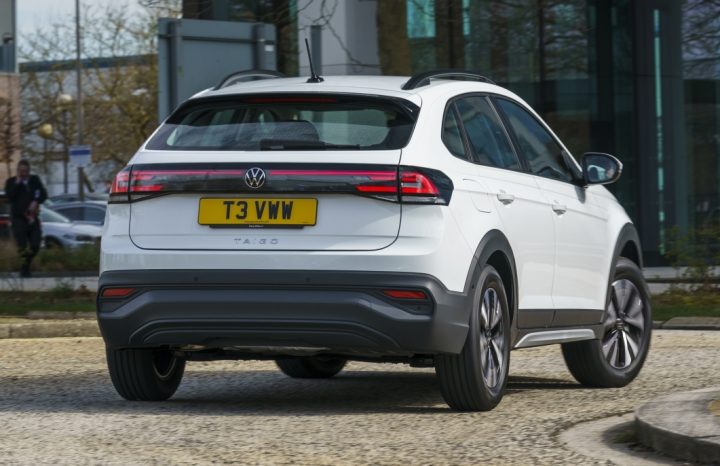