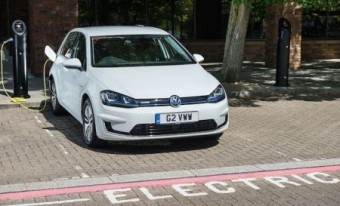 Based on the Golf Match, it comes with unique 16-inch alloys and interior trim, LED head and side lights, the addition of two-zone climate control and Discover Pro sat-nav system with eight-inch touchscreen including additional range information, and the option to remotely charge using a signal from a smartphone.

The standard DSG single-speed gearbox has been refined with a recuperative braking system so owners can select five levels of energy recovery from the system and three driving modes to optimise performance and range as personally preferred.

The e-Golf is on sale through the same 24 dealers nationwide who handle e-up sales, which started in January and are on target for 250 registrations this year, and Volkswagen says it is expecting to sell more of the larger five-door model with its added versatility and range of about 30 miles more than the e-up.

The increased take up will be helped by the steadily expanding network of fast-charging points in public places with the e-Golf reaching 80% capacity in 30 minutes, while a standard at-home domestic point will push it to fully charged in 13 hours.

Volkswagen e-Golf buyers can get a 3.6KW free home charger through British Gas which recharges a flat battery in eight hours, and carbon-free energy is available if they take out an Ecotricity contract negotiated by Volkswagen UK. A full charge is about £3.10p.

The 24.2KWh battery pack and 85KW / 115ps AC electric motor are EU tested to give the e-Golf a normal range of 118 miles and the lithium-ion battery is covered by an eight year or 99,000 miles warranty and the rest of the car is covered by the familiar three years or 60,000 miles guarantee.

Unlike some rivals, there is no battery hire scheme or programme to use a dealer-supplied petrol or diesel model for longer trips, but Volkswagen has negotiated discounted conventional car hire with a major rental provider.

First deliveries will begin at the end of August and after deducting the UK Government £5,000 incentive it will be £25,845 or £229 a month on a personal contract plan.

Volkswagen is still calculating a lease package for business users, who are expected to comprise half the sales, and they hope to get it just below the retail pcp figure.

Once you deduct the Government’s low-CO2 grant of £5,000 the e-Golf is about £1,500 more than the diesel, but the significant Zero-emissions and running costs of about 2.62p per mile make it attractive to business users in particular and to retail buyers who want to have a conventional looking electric car with minimum compromises and good practicality.

Range concerns in winter have been addressed by Volkswagen and the e-Golf can be ordered with an optional heat pump to extract warmth from ambient air and mix it with powertrain generated heat to reduce the power drain on the system in cold weather and push the range 20% further than without the pump.

Volkswagen will introduce a Golf hybrid into the range in the first quarter of 2015 and is well advanced on a new type of lithium-air battery pack giving twice the range likely by 2018 with a fuel cell car under development arriving from 2020.

Volkswagen started work with the electric powered Golf in 1976 producing 20KW or 25ps and it was a mobile test bed for a decade to evaluate battery type and motors.

It’s maximum speed was 50mph and range was about 40 miles.

This led to the development of the Golf CityStormer in three generations of the famous hatchback from 1981 and its lead gel batteries held 11.4KW for a 40 miles range up to 60mph and it embraced energy recovery during braking.

The model was intended for German electric utility companies and 100 were made for a sale price of 49,500 German marks.

In 40 years, 30 million Golf models have been sold over seven generations of the name.

The new e-Golf is made on the same modular platform as its conventional stablemates and on the same production lines as the other Mark 7 models and next year will become the first car in the world to have five power sources, hybrid, electric, petrol, diesel and compressed natural gas, although the last is not available in the UK due to infrastructure shortages.

THE new Volkswagen e-Golf is an altogether more practical proposition for “green” motorists than the smaller, less efficient e-up!

The little three-door car introduced less than six months earlier than the newest of the seventh generation Golf series is good but really eclipsed by the e-Golf.

Its larger C-sector size, five doors, bigger battery pack and more powerful electric motor give the Golf version of the technology an edge on economy and enjoyment.

Charging options are good with two cables in the boot for conventional or dedicated home points while you use the street-side fast charger systems when out and about, if you can find one. You still end up waiting for a charge though and that has to be built into your schedule and journey where-ever you’re starting or going.

Our test over a short 30 mins route indicated about 99 miles from starting and at the end was displaying an 80 miles range so the regeneration was seamlessly working. 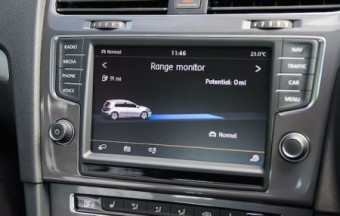 Using the various power modes and combining with the assorted regeneration settings quickly selected on the gear lever, the range could be eased out over suitable roads.

The initial silence of the powertrain in an urban setting continued even when moving onto the motorway and you could easily if not remarkably quickly hit the 70mph limit and even slip beyond with little indication of mechanical stress coming into the car.

The very low powertrain noise meant the road rumbles were noticeable but they are still not loud, and wind wuffle was low as well. In fact, at times, the indicators made more noise.

You need to understand the powertrain and possible energy saving systems to fully benefit from the considerable technology inside the e-Golf but I do wonder how many drivers will fully utilise them to get the maximum possible benefits. 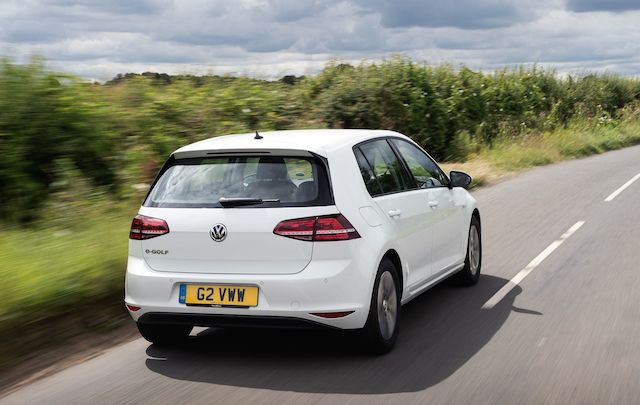 A Golf for the greens, or the geeks, the new electric version will challenge rivals and could become the new benchmark in the sector.