There’s trouble brewing for rivals to the new ‘green’ family car from Vauxhall. 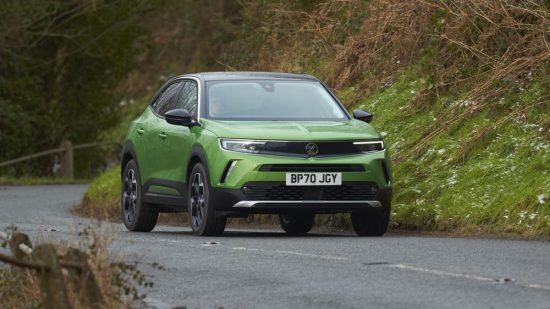 The latest Vauxhall Mokka-e is not a stand-alone model but one of the offerings in a compact SUV series which includes both cheaper petrol and diesel engines and indicates the future direction of its model series as it drives towards the pure electric future in the 2030s.

Mokka-e gets the new look Vizor front end styling treatment which takes its name from the appearance of a helmet. As such it really stands out from the crowd whatever power unit is under the bonnet. 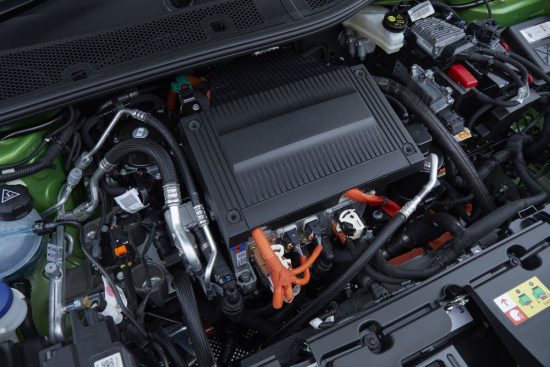 In the case of the Mokka-e all models feature a 50kWh lithium-ion battery and a 100kW (136PS) electric motor with 260Nm of torque as standard.

The Mokka-e also comes with a standard 11kW on-board charger. Under WLTP tests, the Mokka-e has a range of up to 201 miles from a single charge.

Customers can choose between three driving modes, Normal, Eco and Sport to suit their driving requirements and energy consumption. Each mode not only alters the throttle and steering response, but also adjusts the power and torque available.

Supporting up to 100kW rapid DC charging, an 80% charge takes just 30 minutes in the all-new Mokka-e, with the lithium-ion battery guaranteed by an eight-year/100,000-mile warranty.

Through the MyVauxhall app, or via the centre console, drivers can also schedule delayed charging, taking advantage of lower electricity tariffs during off-peak hours. 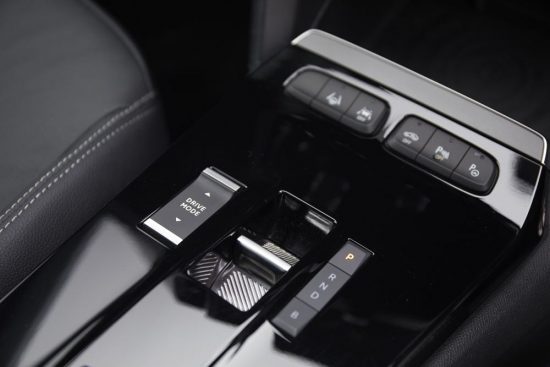 Other features of the car’s state of art technology include Bluetooth, DAB radio, hands free operation and SMS messaging as well as Apple CarPlay and Android Auto as standard, satellite navigation with live traffic updates is available and the acclaimed Vauxhall Connect has e-Call and b-Call emergency and breakdown systems.

These are in addition to a raft of driver aids and safety systems, including intelligent LED headlights, cruise control and speed sign recognition, drowsiness alert with lane departure warning. 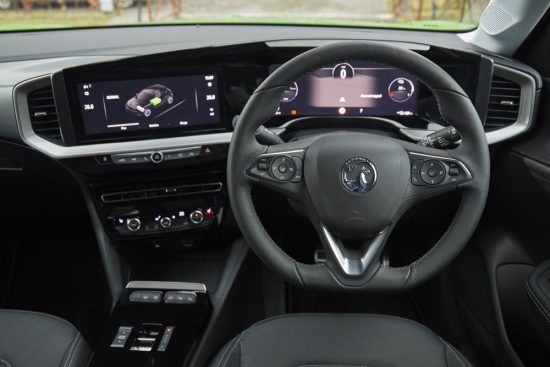 There’s no denying the Mokka-e carries a price premium over its closest petrol and diesel stablemates but you save on registration and fuel costs and the battery pack comes with an eight-year guarantee.

The electric motor and driveline is elementary; just start, select mode and go, in near utter silence and with little hesitation and a lot of urge once the torque builds. It’s quick to 60mph and has no trouble maintaining a good main road speed. 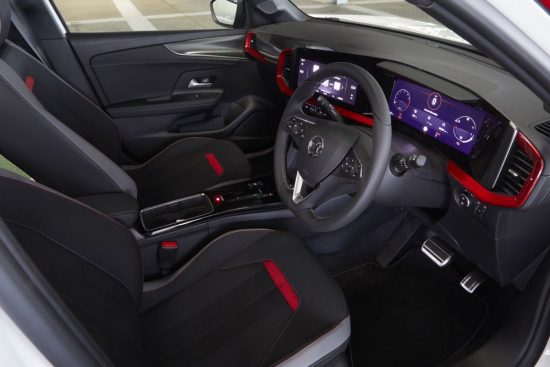 Motorways tend to rapidly drain the charged battery and the stated 201 miles range is likely to substantially diminish unless you can knock it back to about 50mph. I found going on main roads much better to conserve charge utilising regeneration and hill descent.

There was not a lot of sensitive feedback through the steering except when hitting a pothole or raised bump but the turning circle was good. The natural tendency seemed to be running wide on bends but there was little body roll and it all came back quickly if you eased off the pedal.

The brakes combined with the electrical retardation provided very sharp slowing ability with minimum pressure underfoot and the automatic hill-hold did a good job every time. 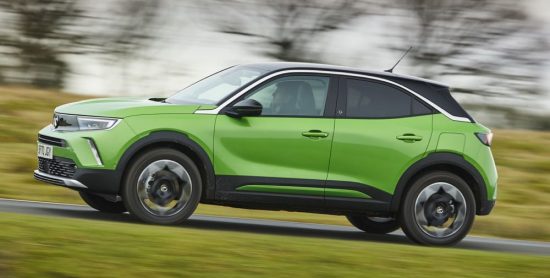 The Mokka-e had a generally smooth ride over most surfaces and the front seats were particularly comfortable with good adjustment range and support where it was needed.

Access was very good to the cabin or boot and the capacity was ideal for a family car, and it could be easily increased as the seats folded. Room was plentiful for a six-footer without impinging too much on those behind and it would take five in all.

Oddments provision was also good infront or behind and there’s plenty of power points to keep young minds active on a longer journey. 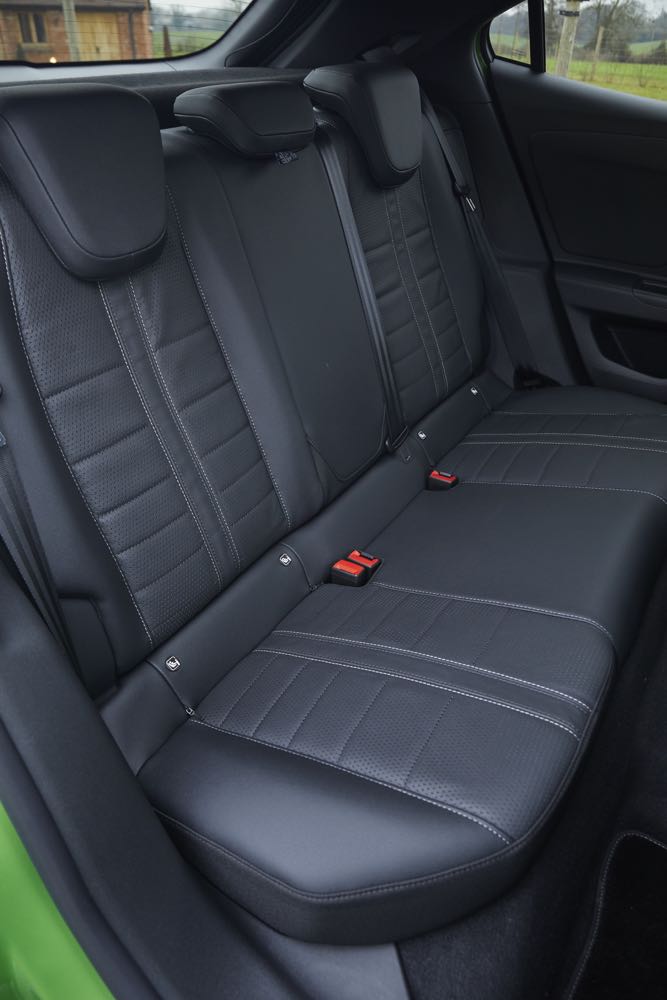 Another good feature in a family car is the visibility and there were few blindspots in the Mokka-e because of the sensors and camera, which provided a very good clear image and AI system to park it as if directly looking down.

It just needed care pulling away from a kerb or into a line of traffic from a sliproad or junction. 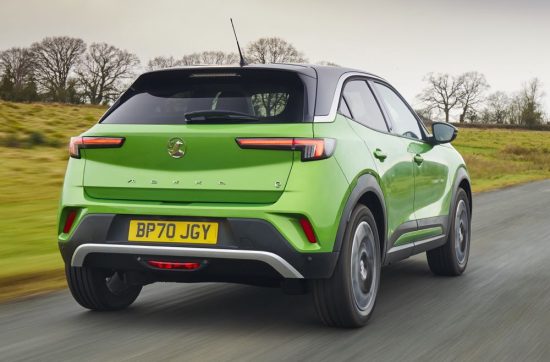 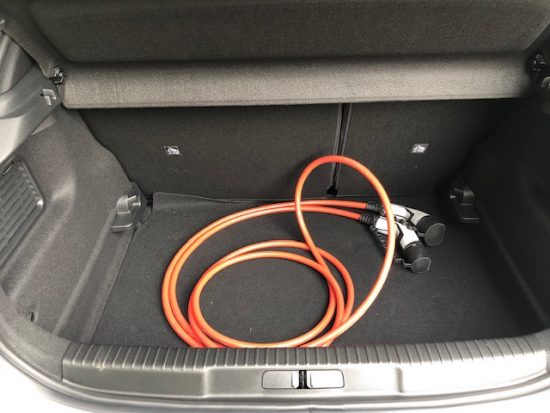 Anyone experiencing an electric car for the first time always comments on how quiet it is.

The Mokka-e produces the usual thrum from the motor when running and its note changes to a whirring as speed rises but it’s never loud or annoying.

Some road shocks can be felt and heard but the way the motor shuts down over a period can produce unexpected clicks and knocks.

It can be inconvenient for some drivers who cannot charge at home but need to use the Type2 charge cable to a dedicated rapid charger for 7kW, 22kW or 50kW and Vauxhall do not supply a home charge cable unlike their GM colleagues on the continent.

I believe the offer of a home-charge domestic cable would actually lead to more sales of what is, after all, a very sophisticated compact family car with a lot of potential.