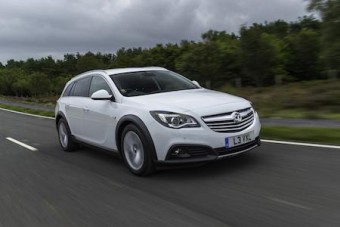 Vauxhall has given it large with the newest Insignia Country Tourer.

The 4WD version of the modern estate aims to build on the model’s popularity with a version designed to deliver the same all-weather capability and safety as much more expensive German rivals.

That’s quite a challenge for what is, after all, the natural and modern successor to the Cavalier estate from the 1980s. But the Insignia is up to the task.

The Olympic white test car was going for gold so far as size was concerned and a few commented on how big it looked. This is no Cavalier-sized model but much larger model which would even dwarf the former Senator stablemate.

It has a sweeping rear roofline and inclined fifth door and can take from 540 litres with the rear seats used to 1530 litres with them folded flat behind the low loading floor. That is a useful size if you have mountain bikes but the sloping tail does restrict the physical proportions of what can be slid inside such as furniture or tea-chests. 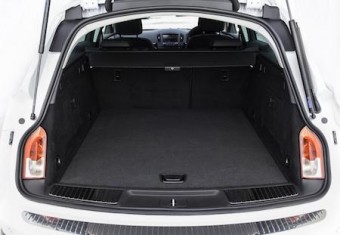 Nevertheless it is a quickly converted rear interior and it is very easy to load from the back and rear side doors and there are compartments and hooks to assist with placing and securing items. It has to compromise with the loading but the suspension copes and ranges from being soft to firm as desired.

From the driving aspect, the Insignia CT we tested is the best seller with its manual transmission but you can also have an automatic version and more powerful bi-turbo with 32ps extra. The three-model CT range runs from about £25,350 to £29,710 (at February 2014 prices).

There is a slightly sluggish pull away from rest but quickly changing into second and onwards sees the acceleration strongly build with good mid-range overtaking ability and a very composed character on main roads and motorways. We averaged 45mpg without any deliberate attempt to save fuel and that has to be down to the standard stop/ start system which comes in when the engine is warm and provides immediately restart when the clutch is dipped to select 1st.

The progressive clutch, direct gearchange and strong smooth brakes work well with the steering to provide an effortless experience behind the wheel and a good turning circle when maneuvering. 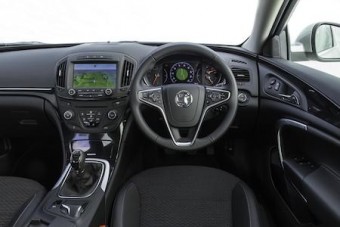 Secondary controls are conveniently grouped around the wheel and column with some set on the central console and they worked well and were of a good size. Instruments infront of the driver covered commonly viewed dials and were large and clear if not calibrated in detail and backed up by warning lights.

Climate control was good with easy to understand settings and output, direction and volume were well up to their task in the large cabin.

Oddments spaces were good and plentiful and its wired for personal entertainment devices with good sound output.

Access was easy, the seats large and comfortable as well as supporting and there was plenty of adjustment on the front pair. Room was good in the back too.

Ride quality was good irrespective of loading and you could hear the suspension coping with bad surfaces but you were generally insulated from the bumps but just occasionally it felt firm on the worst tarmac. 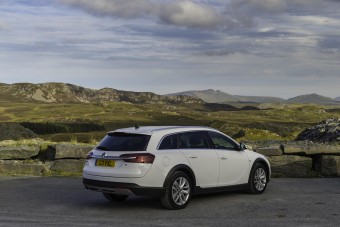 With 4WD underneath, there was never a moment’s concern with the handling or roadholding on some very slippery tarmac. It felt very safe and surefooted at all times.

Visibility was generally good all round with only small blindspots behind the car when reversing and the sensors really came into their own. Lights and wipers did good jobs.

Noise levels were low, the most noticeable being road rumbles, and occasionally the engine could be busy under heavy load in lower gears. The overall look, feel, comfort and performance of the Vauxhall Insignia CT certainly had refinement running through it. Large amounts of refinement.