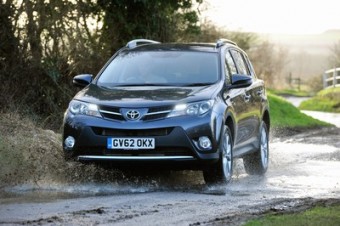 As the world’s first compact crossover created 20 years ago, the Toyota Rav4 deserves a lot of respect.

Its creation was followed by similar models from Land Rover, BMW and Audi and it made many heavyweight 4×4 makers take a fresh look at their chunky cars. So it was quite surprising to get behind the wheel of the latest Toyota RAV4 and realise how this has grown up.

They are powered by a selection of 2.0 and 2.2 diesels or a 2.0 petrol with six-speed automatic or manual transmissions and two or four-wheel-drive.

It is not an extensive range but one that carefully reflects the most popular models bought in the UK in this sector.

The original RAV4 from 1994 was slight and agile, compact and capable. The RAV4 Icon 2.2 D4D manual tested has, because of safety requirements, become a much bigger and fatter model and lost some of its previous dynamic quality and appeal.

The four-cylinder engine is a fairly unstressed unit, not quick revving but has a good power spread once you get moving and with the manual gearbox it pulls well and quite economically.

Noise levels are not low but diminish as you move up the gearbox and take the longer ratios so motorway and main road trips are much quieter than plugging around town or country lanes.

The test car weighed in at 1640KG and with only 147bhp underfoot the acceleration was average and top speed does not even reach 120mph.

However, it was good to see the fuel consumption of 44mpg which was decently close to the claimed combined average of just under 50mpg.

The ride was slightly firm but it absorbed most road shocks without too much discomfort inside and both body roll and pitching were well controlled. It just felt heavy footed and not nimble.

The seats were very comfortable infront, slightly lacked support in the back, access was good and you could easily fill or empty the load area behind the fifth door where capacity ranged from 547 litres to 1746 litres. 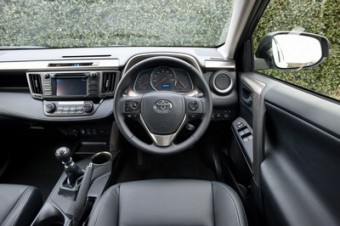 From the driving seat, the instruments were clear and the secondary switches convenient, the headlights were good and the wipers/ wash system was effective but there were blindspots behind due to the high waist and small windows.Annoyingly, rear-parking sensors are £600 extra.

The places to put on-journey items are good in the front and back and it’s a practical family car in this respect. Climate control and powered windows are standard but a powered roof is another £500.

Probably the most impressive feature of all about the latest Toyota RAV4 as tested was its overall feeling of quality and attention to build detail. I felt as if this was a car which would not shake itself to bits or wear out for a long time.

After 20 years in production, the Toyota RAV4 can still lead in some respects.