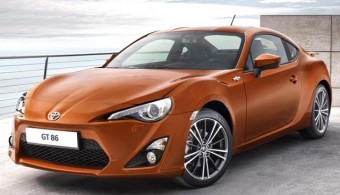 The maker of the acclaimed Celica and Supra and which has dabbled in the World Rally Championship as well as sports car racing, is now strutting its stuff with the Toyota GT86 coupe. The result of a joint venture with Subaru, the GT86 is a classic coupe with punchy engine up front pushing drive to the back wheels.

Toyota’s motor sport heritage shows in the GT86, even down to the hollowed out back to the interior mirror which save grams and indicates the drive behind the new light-weight sportster.

In fact the use of special steels, clever design, no turbo makes this a modern take on a classic sports car which an enthusiastic driver can enjoy.

The very shape of the flat-four cylinder engine which is similar to the famous Porsche’s of old, gives strong torque or pulling power of 151 lbft at 6,400rpm and pushes out close to 200bhp at a whopping 7,000rpm.

The figures for acceleration and top speed are impressive but it’s the way the GT86 accelerates mid-range which really impresses with a deep roar before it catapults past slower vehicles. 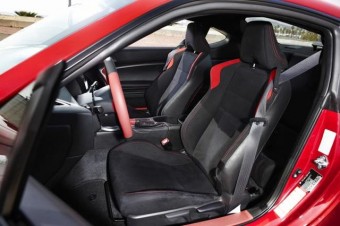 In the driver’s hands the GT86 steers with immense precision and with good feedback at speed, while its urban character is revealed as having a compact turning circle and there is never any vibration or kick-back.

The close-ratio six-speed manual box, an auto is another £1,500, has a smooth clutch and flick of the wrist action and precision as you move through the gate.

Underfoot, the brakes need only modest but progressive feel to bring about a delightfully controlled and quick stop from high speed. There is also a decent big handbrake to grab.

The front struts and rear wishbones endow the GT86 with excellent handling, helped by it low centre of gravity, and it puts down the power very easily and safely on any surface.

At the same time the near ideal weight balance front to rear makes it a joy to rush through open view corners and in tighter turns it will slightly oversteer but in a beautifully controlled way which a driver can control without drama. 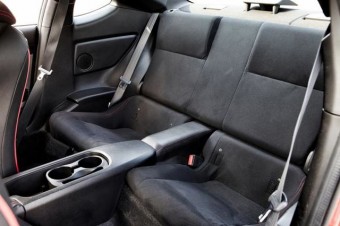 The secondary controls are all brought close to the driver, the instruments are big and clear and the cabin is wrapped around but possibly it’s not as clinically clean a design as some German sportscars. And there is virtue in that too.

Oddments room is reasonable, boot space tight under 245 litres, so you don’t have to worry about fuel-sapping luggage to be included.

Access to the front pair of seats is very good, but it’s a squeeze getting into the rear two bucket seats and there is not a lot of room there either. The driver and passenger had plenty of adjustment room on their seats, leg and headroom is generous too and the shape of the seats really holds you in place.

Visibility is not brilliant behind and to the rear three-quarter but its fine to side and front, with bright headlights and good wipers but there is not one on the back glass. Noise levels are generally low until you hit the throttle but road rumble is ever present although wind wuffle is very low. You have a civilised sportster in the Toyota GT86 and you have to work it to produce a faster car, but it is quick where it matters and a delight to drive in this way. Even your granny would love it.