With more people than ever now living in urban areas car makers are considering how they meet their requirements and the Toyoto Aygo X is the latest from one of the world’s biggest manufacturers.

It first gave us the Aygo in 2005 but time and tastes change so Toyota has updated its original model and created the Aygo X, which has a chunkier and stronger look, better equipment and retains the agile abilities of its namesake.

The Toyota Aygo X crossover comes in a choice of 8 models based on four trim levels, five-speed manual or automatic transmission and priced from £14,805 to £20,750, all using a 72bhp 3cyl sub-1.0 litre petrol engine.

There’re Pure, Edge, Exclusive and Limited Edition models which, due to their equipment and gearing, straddle a couple of emission and tax bands. It is worth mentioning that one option unusual in this class is the availability of a folding canvas roof to give the Aygo X an open-air feeling. 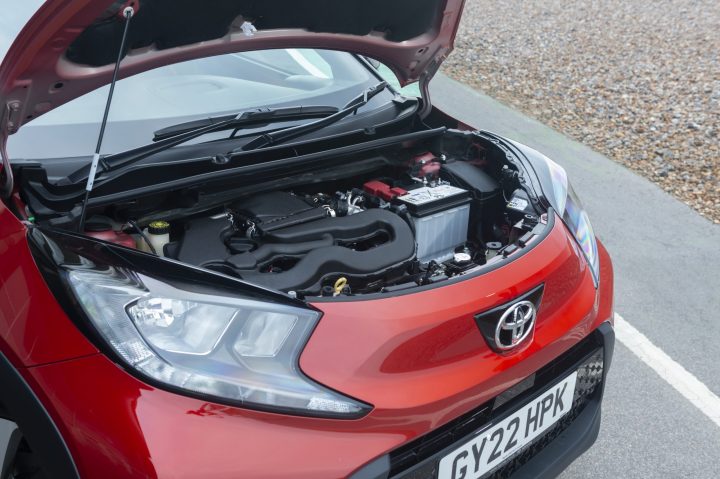 Squeezed under the short bonnet is a compact yet respectably powerful 998cc three-cylinder petrol engine which proved ideal in town and ultimately surprised us with its overall economy above 62mpg comfortably exceeding the stated WLTP best of 57.65mpg. It proved you cannot believe all you read.

While most of our test was in urban areas and on open country roads we had to make an unexpectedly brisk motorway trip and the Toyota Aygo X again surprised us with its ability to seemingly cruise without complaint at the legal maximum.

Holding it steady in fifth was not exactly a quiet experience however and that’s when its sub-1.0 litre capacity showed up, but it was tolerable nevertheless. Pushing it through the gears with a long-travel clutch action and tight gearchange also raised the noise level but its busy ‘sewing-machine’ engine note is not entirely irksome, but rather, amusing.

With the need to quickly move out of the shorter first gear to make reasonable progress, the pickup is good and the Aygo X easily maintains its place in urban flows but it needs planning and frequent downchanges to pass other vehicles on main roads. 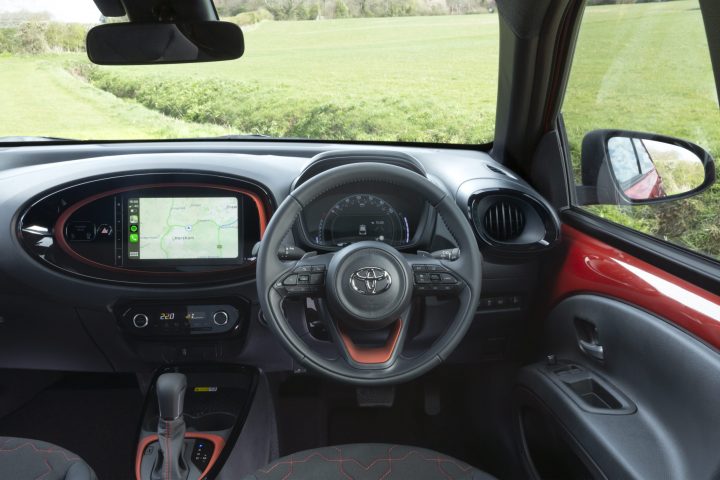 The brakes were very good, modest pressure bringing about a quick and progressive slowing while the handbrake did its job and the steering imparted good feeling, had a tight turning circle and did not suffer any vibration or kickback.

The Aygo X comes with a good suite of safety features including intelligent brakes, steering assist and lane warning, automatic headlight and intelligent cruise control as well as fatigue monitor.

Commonly used stalks operated efficient wipers and effective headlights for the possible speed but I thought the black finished buttons on the wheelspokes for ancillary functions and those on the lower edge of the central display for heating and ventilation were disastrous and should be backlit for clarity and safety. 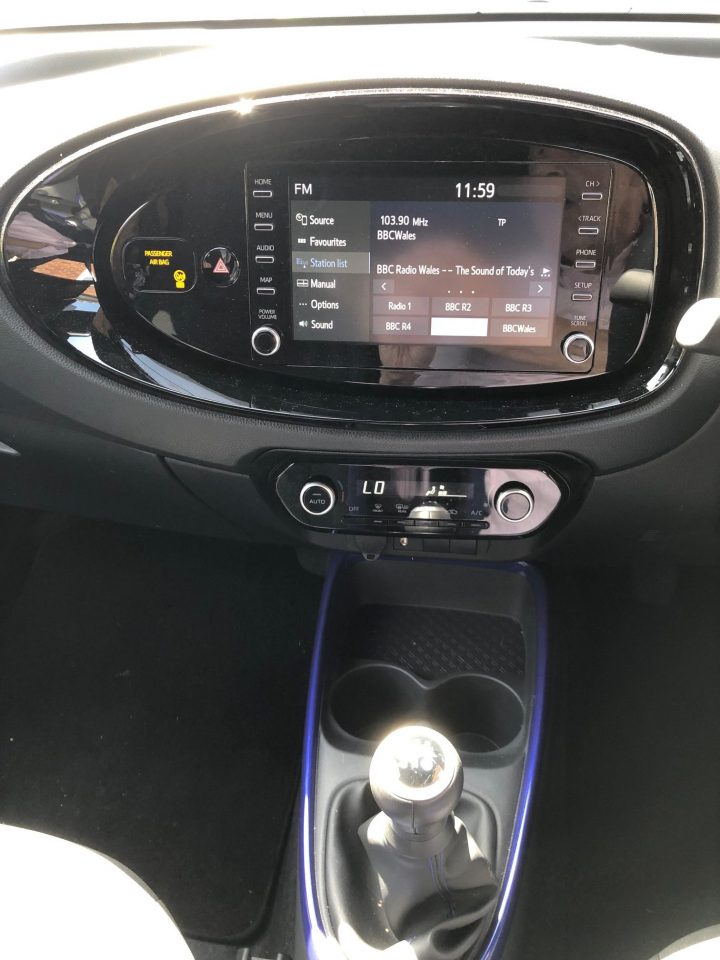 Simple instruments infront of the driver were big and clear by comparison and the eight-inch infotainment display was sharp but needed hooking up to a mobile phone for navigation.

The heating on our test car struggled to warm up quickly but cool air freely flowed although it still did not reach those in the back and the pop-open back side windows were necessary.

Oddments room was good for a small family car and the boot would swallow up some shopping bags or two weekend cases but little else without individually dropping the seatbacks and they did not lie completely flat. 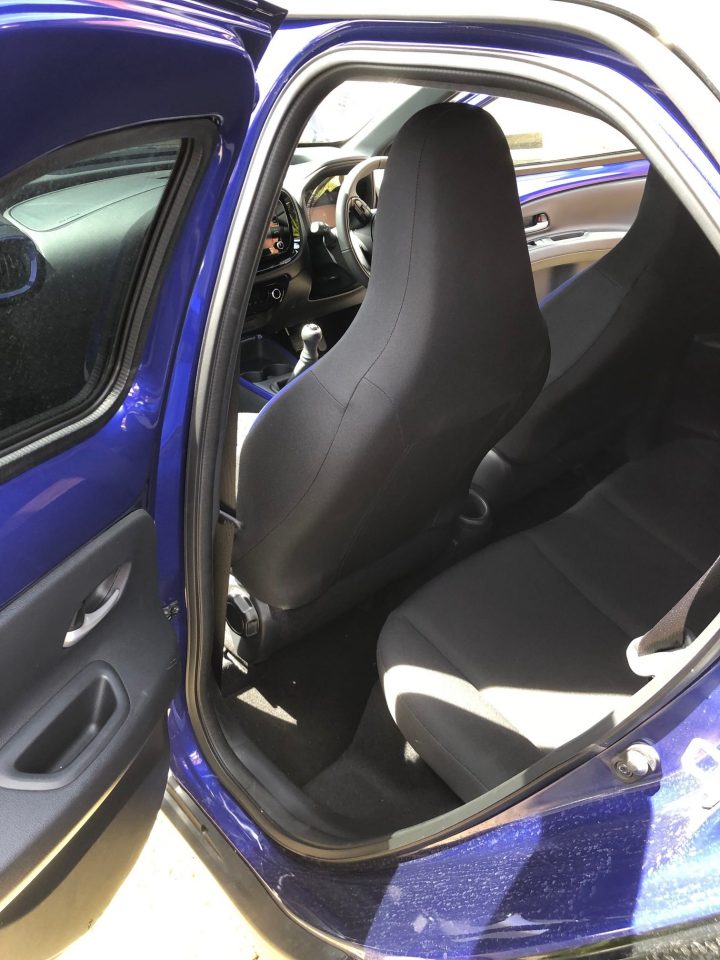 There was a good lip to the boot and it was a fairly rectangular shape with a high opening fifth door so it was easy to load under a soft quickly released cover. It was not so easy getting into the back seats through a small opening and restricted angle to their doors (above) which compared to the much wider opening front pair and their larger apertures.

Once inside, whether infront or back, the seats were cloth covered, nicely shaped and supporting for comfort and the adjustment range was reasonable but not generous on the front pair. It is a city car after all but was good for a 160 miles trip we undertook during the test week.

Visibility was excellent to front and sides, but we needed the reversing camera with a small back window and hidden hindquarters, the washers and wipers did a good job and at night the headlights were adequate. 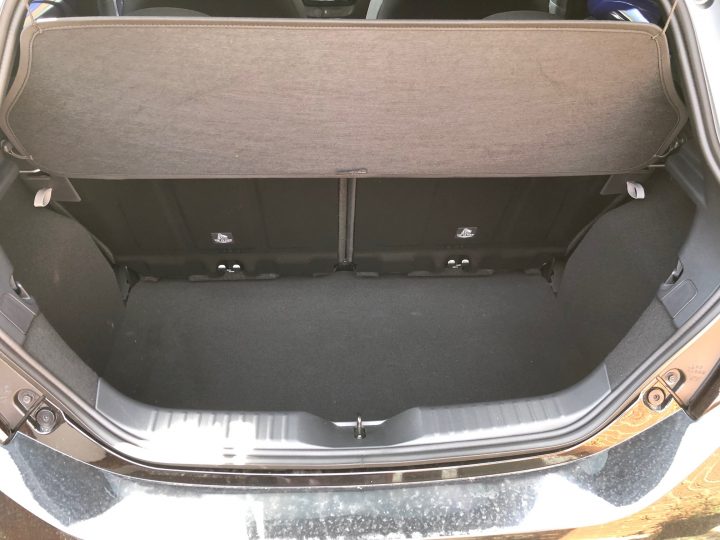 The Aygo X was very easy and unchallenging to drive, it proved nippy, had good roadholding and predictable safe handling and was not too upset by mid-corner bumps.

With Toyota’s ten-year warranty based on annual servicing the Aygo X is a very attractive proposition as a city car with wider appeal, but I think the designers must revisit the very poor detailing of the secondary switches and give them the attention the rest of the car has received. Small things matter. 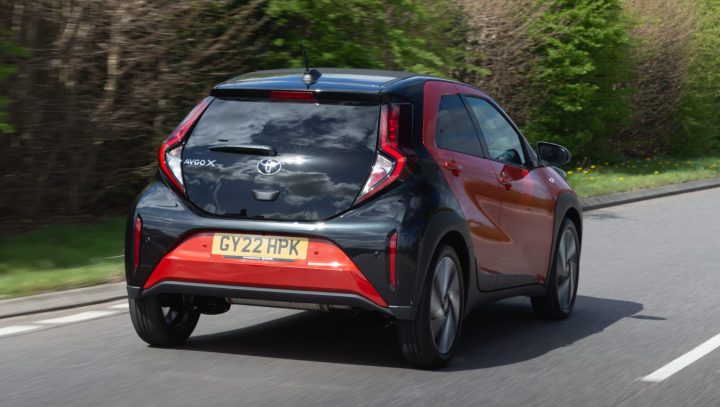