The innovative Tesla Model Y was Europe’s best selling car in September as it built on its engineering expertise and shrugged off competitors.

On the eve of the company’s 20th anniversary in 2023, Tesla has been the outstanding if controversial success story over the last two decades, setting engineering standards for traditional car makers to consider and compete with, producing very mixed results.

Tesla was ahead of the rest when it launched its first model in 2009, followed by the S, X and 3 over the next decade and the Crossover Model Y in 2020, shortly before the Model 3 became the world’s best selling electric car with over a million units in June 2021. With the European swing towards more Crossovers it is likely that the Model Y will become the best seller from the Tesla brand in the near future.

We have previously driven the overtly sporting Model S and to find out what makes the Model Y so popular we had to try this modern practical family car. We picked up our test car from the Tesla Cardiff showroom fully charged and immediately chose a varied test route of motorway, A and B-class roads into Mid-Wales and back. 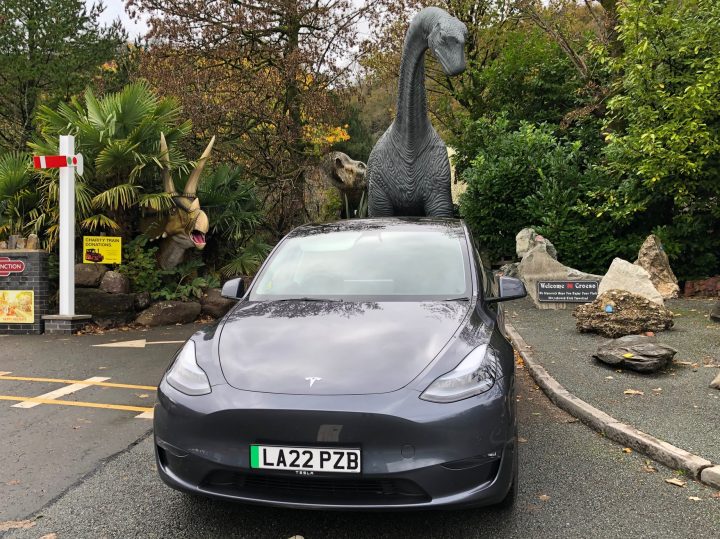 Our dual motor demonstrator sits mid-range with the single motor model a few thousand pounds cheaper and the Performance derivative a stonking £10,000 more.

Unlike a few years ago when Teslas stood out in the traffic queue, today’s profile looks less radical with subtle signs of its origins as the wind-cheating nose blends into other cars on the road.

Model Y is a Crossover so it looked tall and provided enormous interior space and a big luggage compartment either end. This alone will convince many buyers they should have one with modern families needs for carrying any and everything. 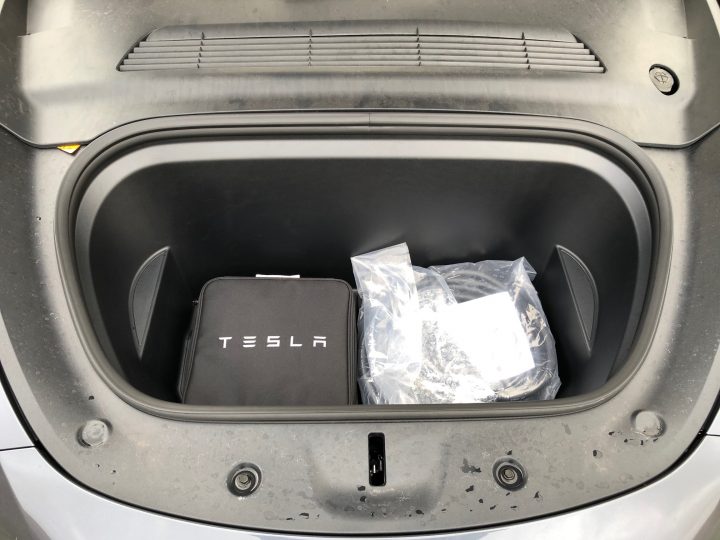 Access to the bonnet and boot areas was easy, the power cable neatly stows away, all doors open wide and when seated the headroom is remarkable along with the leg and shoulder space. It is a very generous five-seater.

Up front the driver had a very large central multi-function display including speedometer, power-meter and infotainment, and just two column paddles which select direction and cruising, or headlights, indicators and washers, set through the display screen. 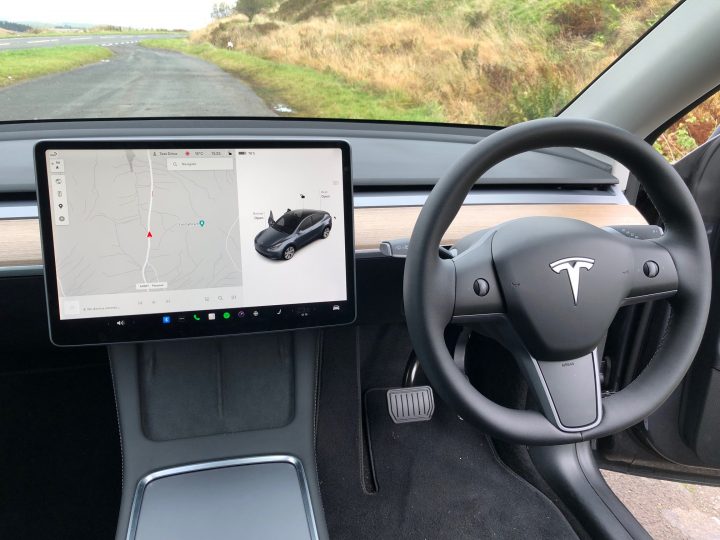 The clinically clean look was at first startlingly but gradually all felt right and it may take a while to get used to if sitting in a Model Y for the first time. I would have preferred a bit more colour and surface texture variety to the trim but the fit and finish is of a high order.

That big screen in the centre of the car dominates the fascia and really needs a lot of getting used to when you want to shift between displays and settings, which are best selected when stationary. On the move it is too distracting in my opinion. 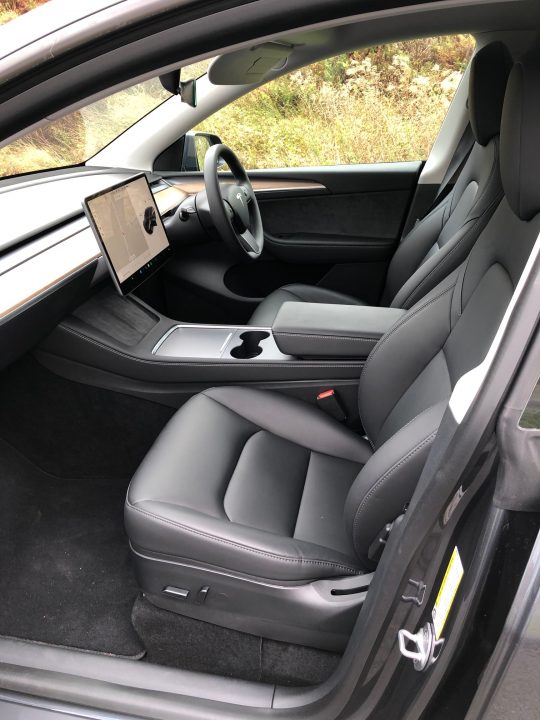 The readouts are very clear, even down to identifying individual traffic cones at road-works or if you are following a car, van or lorry. Remarkable. The intelligent cruise control does a very good job and was as close to fully autonomous as it’s possible to go for now.

Heating and ventilation was good throughout the cabin with powered windows as back up and one of the biggest glass roofs on any car meant the interior was very bright. Oddments room was good infront or back with plenty of compartments to place items of various sizes.

The seats were extremely comfortable despite not being particularly thick and they made occupants feel supported with good adjustment on the front pair. 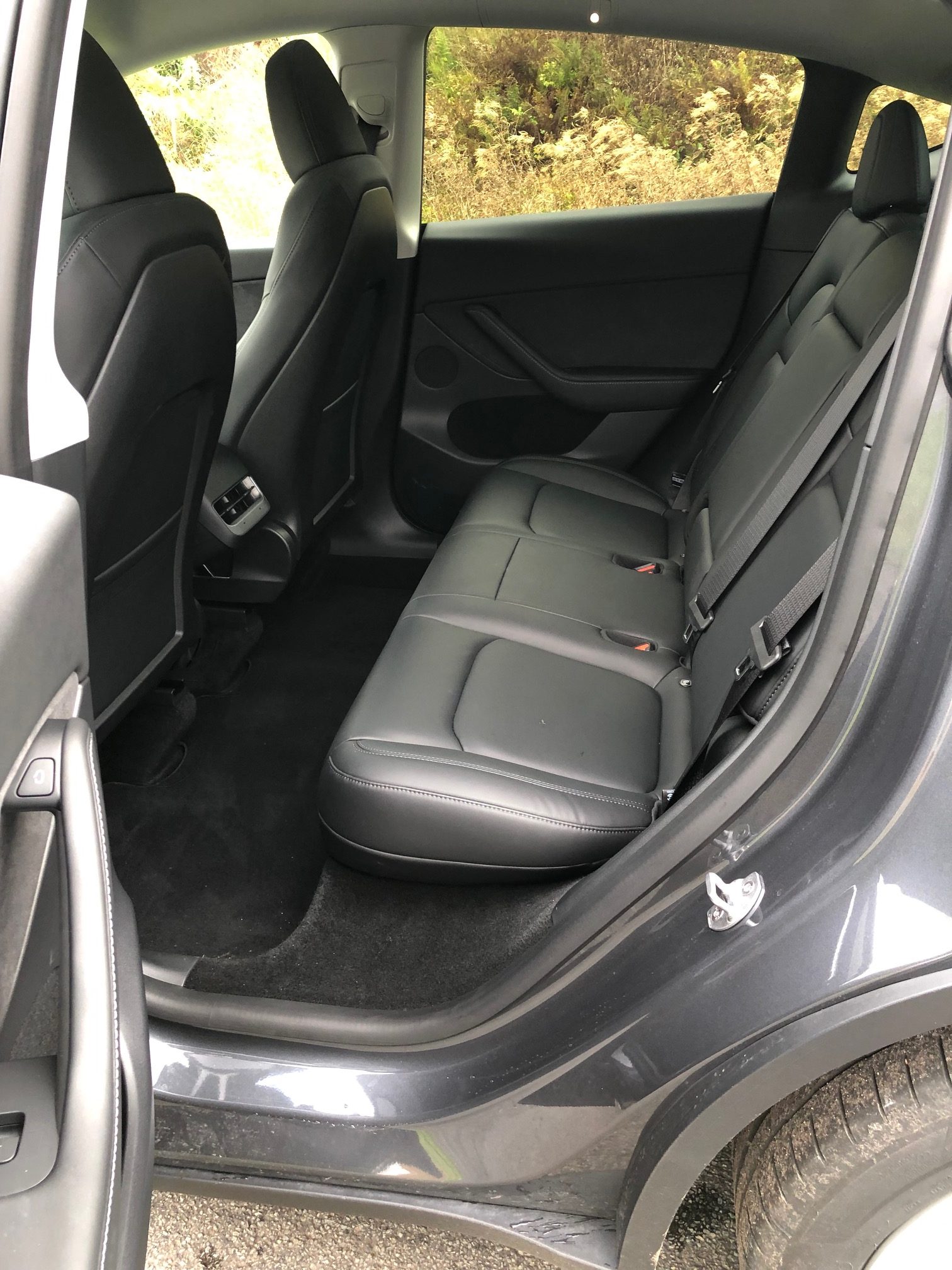 Visibility was good for the driver with low waistlines and deep front screen but more restricted over the shoulder and to the rear when reversing, making the sensors a necessity. Washers and wipers were highly efficient but we didn’t have an opportunity to test the headlights.

Supporting the seating, the suspension was unexpectedly firm over all but motorway and better maintained secondary roads and this is an area of the design which needs addressing as it detracted from the Model Y’s refinement. It might even put off some buyers transitioning from a traditional family or executive car. 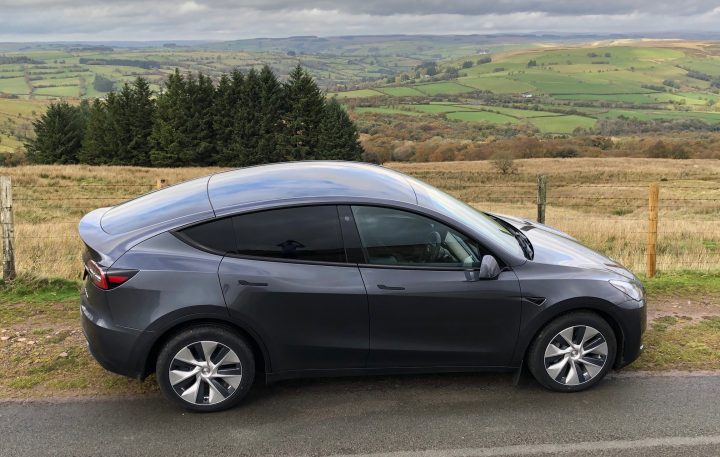 The electric powertrain was both smooth and quiet by contrast with the suspension and meant the road and suspension rumbles were more obvious. You have triple modes to set for the transmission but they really reflect the retardation potential and I think Tesla has missed an opportunity to better “tune” this feature for open-road driving and extend the range between recharges.

That dual motor power bulge really gave the Model Y a sports-car like acceleration from rest or in mid range for overtaking and there was no lag when you floored the pedal. Motorway cruising was silent and swift.

On winding secondary roads the grip was good, the handling faithful and failsafe and it was a relaxing ride apart from the occasional bad bits of tarmac. 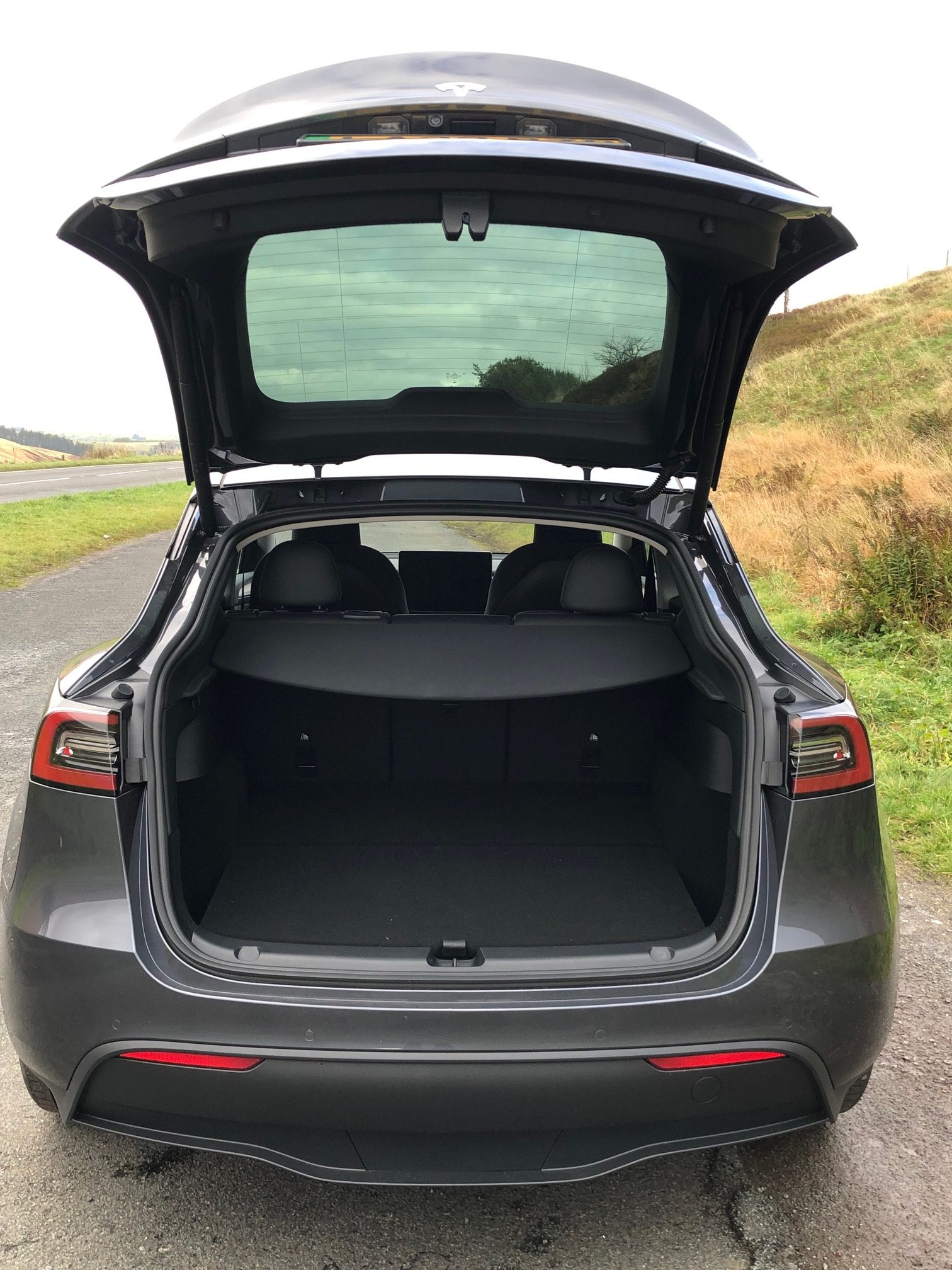 The Tesla Model Y can be rightly compared to other executive cars and its simplicity sets it apart while its roominess is possibly class leading and it’s price competitive. 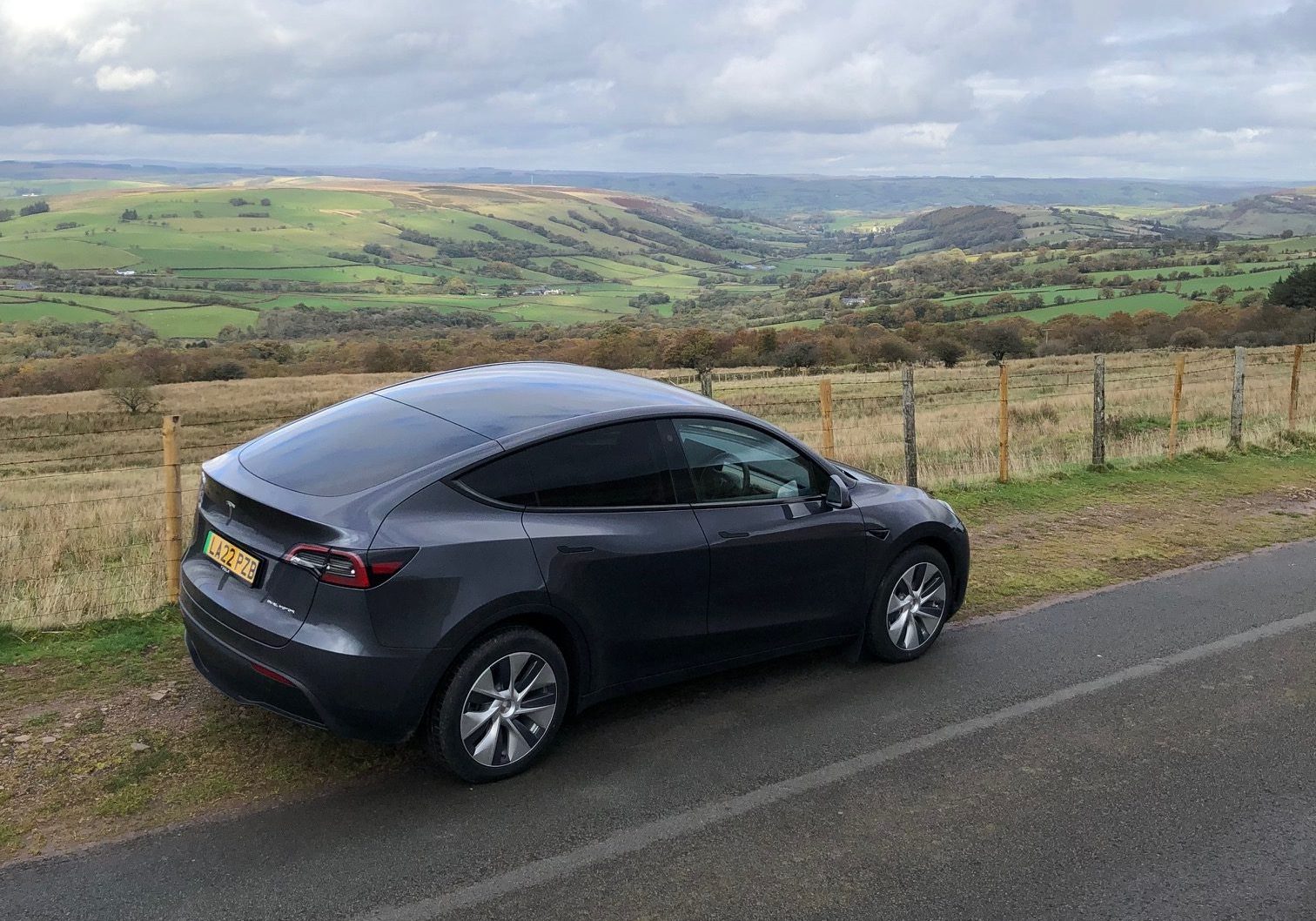 While the Model Y is currently good news for Tesla in Europe and the UK, BBC News reports that in the US the brand is recalling 40,000 cars for a power steering system software update although they say they are unaware of any injuries or deaths in connection with this problem,  writes David Miles.

The BBC says in September this year Tesla also recalled nearly 1.1 million cars in the US because the electric windows might close too quickly and pinch people’s fingers. So far in 2022 Tesla has issued 17 recall notices covering 3.4 million vehicles globally.

Media has also reported that Tesla boss Elon Musk sold another 19.5 million shares of the electric car business worth £3.5 billion, two weeks after the world’s richest man completed his £40 million takeover of Twitter shedding a reported 50% of the global workforce.

Tesla’s share price, also according to the BBC news service, has fallen by more than 55% since the start of this year.