Every manufacturer loves to pack features into their model to make as much money as possible, but the Suzuki Jimny has something few ever include, a free smile, writes Robin Roberts.

The standard-spec smile is something so many modern cars lack but the simple Suzuki has it in spades. And thensome.

The original Suzuki Jimny dates from 1970 and the Light Jeep 10 which was remarkable for its abilities against much more powerful 4×4 rivals, but it was the SJ series which really won the hearts of Europeans and UK buyers in the 1980s and for the best part of three decades afterwards.

In that time it appeared as three door with soft and hard tops and even pick-up styles. They were small on cost and big on ability.

Now the fourth generation has arrived in the UK, but it could be a short visit as EU emissions legislation is threatening the model and despite the fact thousands have been ordered they could become the most collectable of all and I certainly would consider as a future classic. 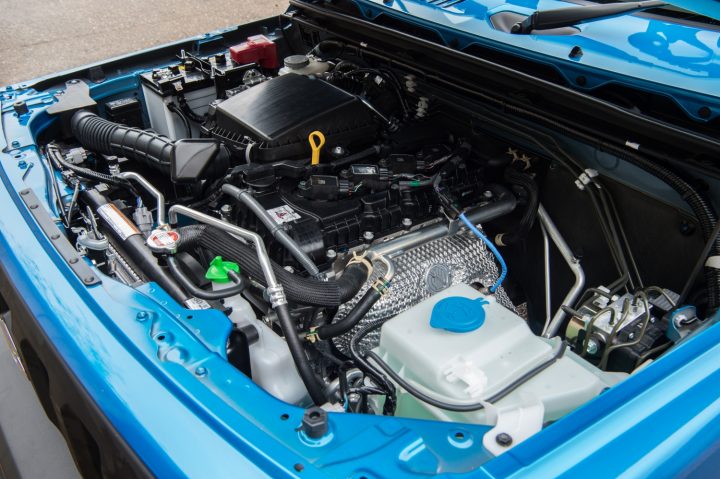 Our near top of range model with the bigger engine and manual gearbox is possibly the best allrounder. It never failed to make me or passengers smile when we approached, climbed in and started up.

It was quick to start, sounded busy even idling, and was quick from a standing start up to about 25mph but the lack of gears meant frequent changes to keep up with traffic.

That was no hardship because the light and progressive clutch was matched with a slick and direct five-speed gearbox and the two-four-wheel drive mode lever was just behind it on the central console and could be used on the go so momentum was maintained and boggy ground was pushed away under the wheels rather than allowed to drag it to a stop.

The busy engine note became more irritating at motorway speed and we settled for a steady 60mph pace on two long journeys which also had the benefit of stretching fuel economy towards 45mpg. 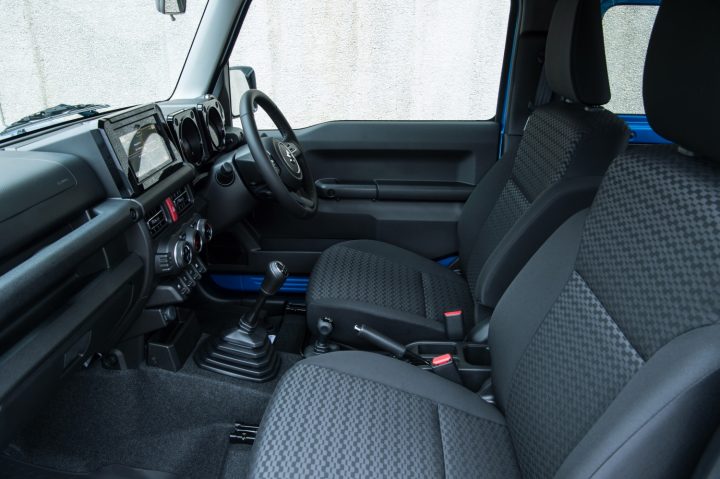 While its not quick through the gears a high driving position and low waistline meant we could see and anticipate traffic conditions and make the most of that to overtake or slow down as necessary and keep our fuel figure over 40mpg overall.

The engine has a modest pulling power but it will tow a small trailer and with the right gear in hand the Suzuki Jimny is a capable car off road as well as on. Just read the conditions and let the Jimney do what it needs.

That’s easy because the short 2.25m wheelbase makes it agile in confined spaces both in town or off-road on tight tracks, lanes or woodland.

There’s useful ground clearance for rougher terrain and essentials are high out of the way of dangerous contact. The springs cope well but their firmness gives a stiff or choppy ride at times on metalled surfaces and it can crash over consecutive bumps or ridges.

Body roll is modest and the Jimny really hangs onto the road, especially if in all-wheel-drive mode, so there’re no scary moments when cornering and it was fairly stable in strong cross winds. 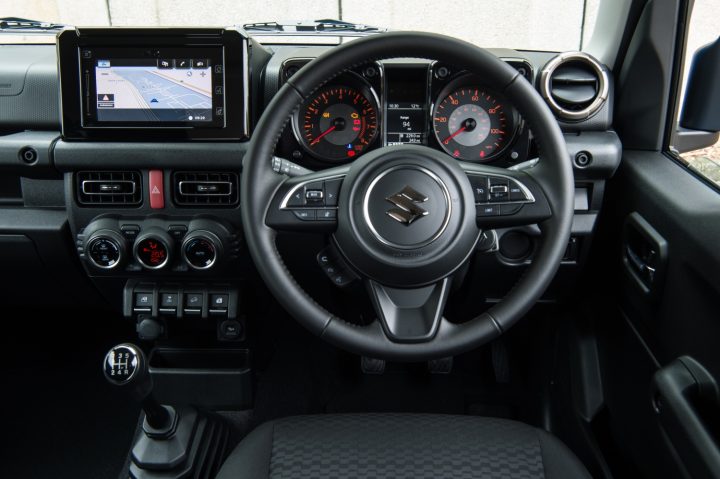 The three-door body gives excellent front seat access, but its more of a twist and tuck into the back two seats and the luggage space behind is very small with a helpful compartment beneath and rear seat-backs which can be partly reclined. We found headroom was good throughout while legroom was on the short side and very short in the back.

The seats were cloth covered in our car, well shaped and reasonably supportive with modest adjustment range for driver and passenger. 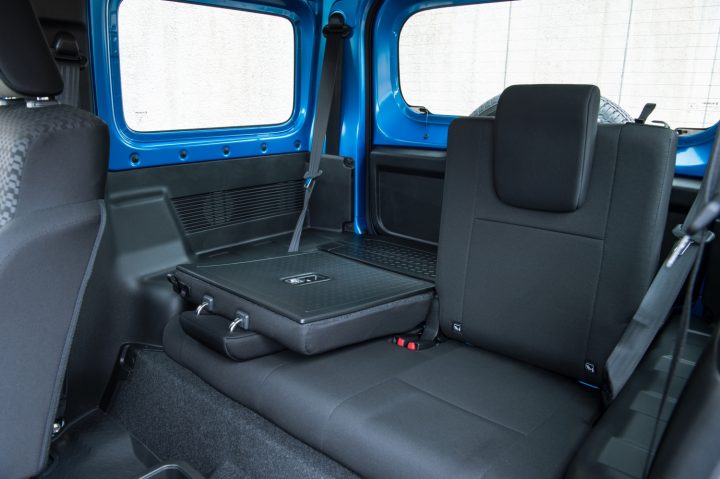 Behind the wheel everything was a ‘cosy’ fit for the driver, all secondary switches on the wheelspokes or column were clearly marked and sensibly positioned and those on the fascia were close if sometimes not so easy to see.

Essential gauges were infront of the driver, a good size and clear if simply marked while the central infotainment screen atop the fascia was also quickly read. The Suzuki Jimny software supports Apple and Android mobile phones and the navigation screen is basic but good. 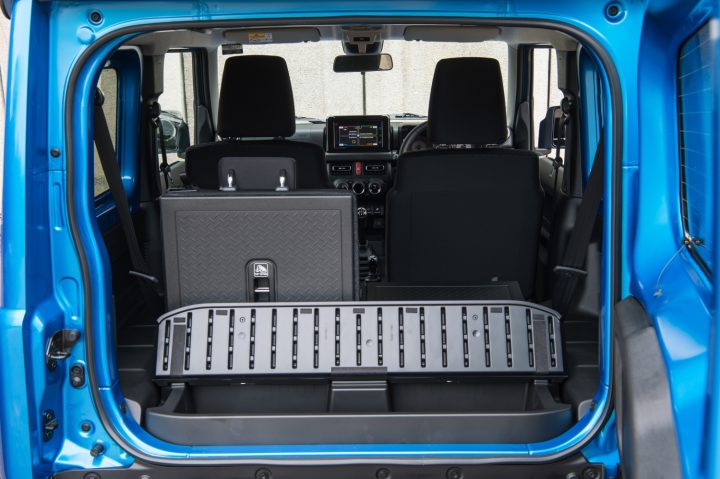 Heating and ventilation was very effective in the small cabin with strong output to the front footwells and side windows, backed up by powered front windows. Lights were reasonable but not long-sighted and the wipers were effective if on the small side. You also learn to look around the back-door mounted spare wheel.

Oddments room was very small with many compartments but of restricted size and I think many items would have to live on the back seat or in the rear footwells, or the loadbed base.

The Jimny’s noise levels were modest once you excluded that of the busy engine. Wind wuffle was surprisingly low considering the squared outline of the car and even road noise was not particularly loud, except when it struck some potholes or ridges. 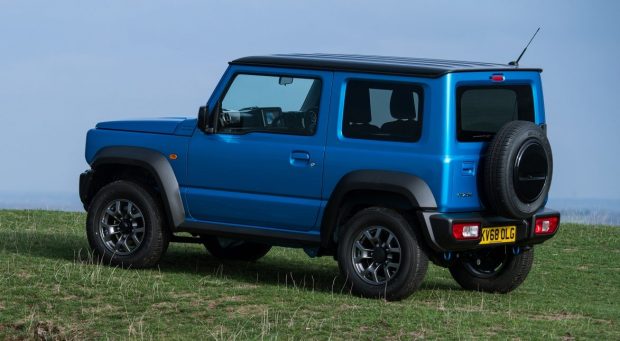 So, there is nothing really wrong with Suzuki Jimny 1.5 SZ5 Allgrip but a lot of things which are just right and it’s one of the most characterful cars on sale today with an ability which belies its size and price. While it has practical family car limits, it has no limits when it comes to making a driver smile.