That was the reaction our Enyaq generated in a few people during our test of the company’s first pure battery SUV and which marks the change of direction it is going as we begin our journey into the zero emissions future.

Engineered on parent Volkswagen Group’s electric modular platform it is the first time that this chassis has been built outside Germany. It won’t be the last. 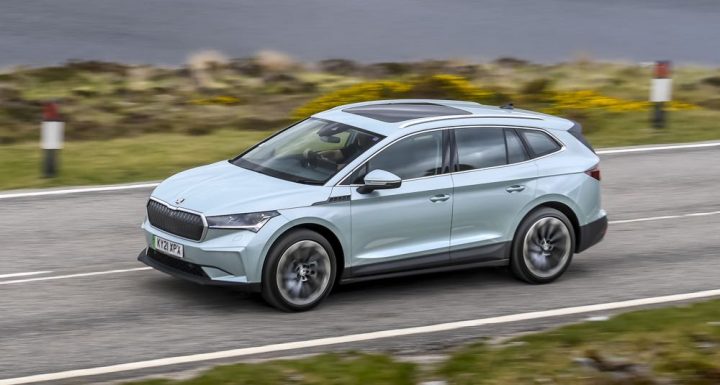 The five-seat Skoda Enyaq sits at the top of their range and takes them into a new sector populated by premium brands which command very high prices and can mask the cost of their pure-battery technology.

In that comparison, the Enyaq is not that expensive but to anyone who remembers the bargain small cars Skoda formerly made it’s in another league.

It’s really a very big step up in terms of sophistication and comfort, and comes with a choice of 179ps 62kW or 204ps 82kW battery that can be nearly fully charged in under 40 minutes at best or 13hrs at worst.

Our test car sits towards the top of the range and was rear wheel drive, not all-wheel-drive, and had the larger battery which gave a longer range. 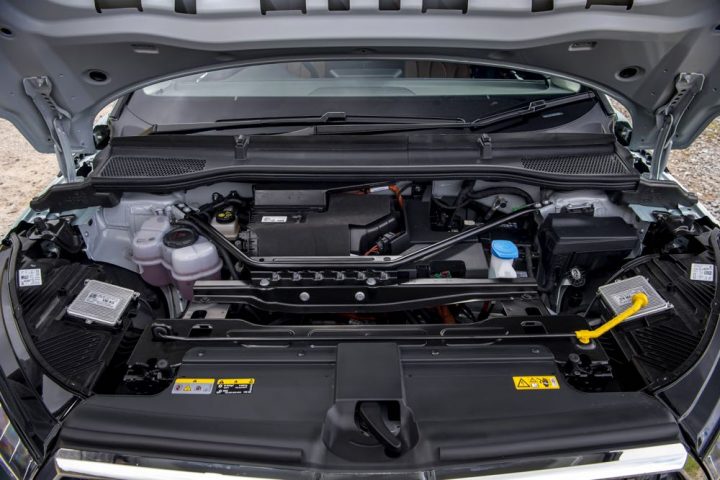 It’s worth mentioning the car comes with 7kW AC-domestic and 50kW DC cables but you have to pay extra for a DC fast charge connector. Depending on the battery size and power output, recharging can take around half-hour or up to 13 hours.

The motor and automatic gearbox in our 80kW EcoSuite model provided extremely smooth power delivery and you can fine tune with five settings to optimise requirements and sharpen steering, responses and handling from eco to track and modes between.

However, you are moving a model weighing over two-tonnes and its absolute performance is not exceptional, but it’s still impressive.

What I liked was the reliable range we obtained of about 280 miles which was short of what WLTP tests indicated we would get but was very useful and less stressful than many models on sale today.

It’s respectable in eco and normal modes, more vigorous in the other settings and while the powertrain is almost silent this throws into relief the road and suspension noises which intrude the cabin on anything but a very smooth surface.

The suspension did a good job absorbing the worst bumps and potholes and its 2.77m wheelbase smoothed out a lot while also giving the Enyaq a lot of legroom in front and back seats. The clever off-set split seatbacks with a load-through section as well made the Enyaq very versatile when it came to loading and the floor was mid-thigh height and a sensible shape to swallow bikes, kit-bags and a tent when not doing the shopping trip. 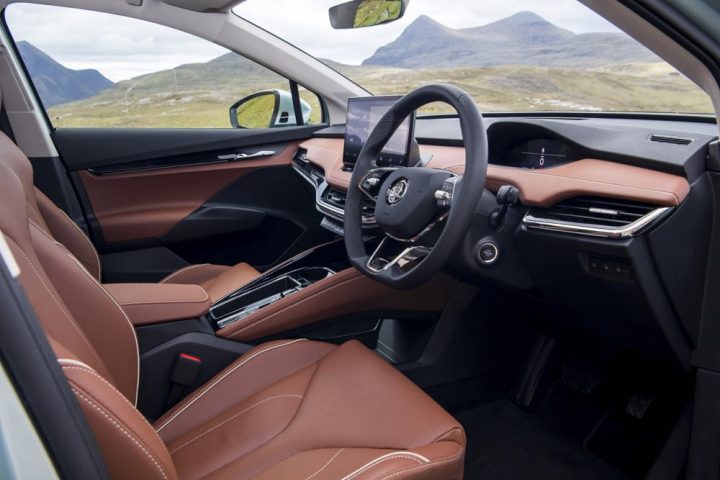 Oddments provision was excellent for a family car with glovebox, door bins, console recesses and box as well as seat-back pockets.

A big car needs good climate control and air conditioning and the Enyaq was not lacking with wide temperature range, prodigious power and fine directional control, backed up with four electric windows and optional medium sized sunroof over a blind.

The Enyaq’s comfort and secondary controls were spread along the centre of the fascia and to the right of the steering wheel as well as grouped on the spokes, with stalks for lights and wipers as well as paddles to manually vary recharging on the move. Our car had intelligent cruise control so that eased the longest journeys in traffic and varying speed limits. 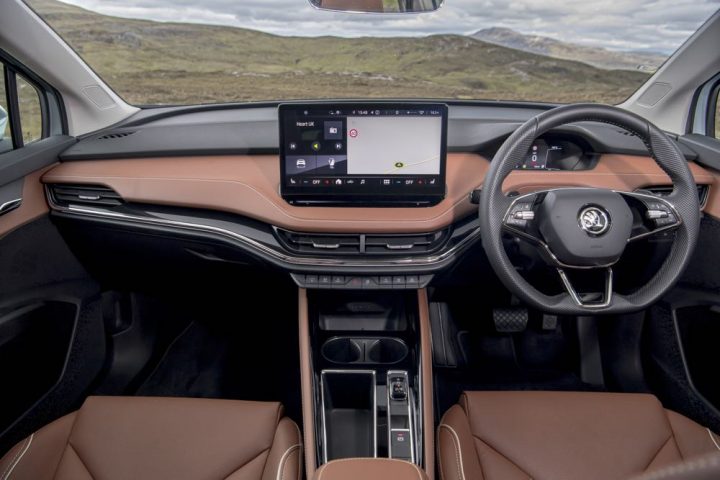 Some of the comfort and convenience switches produced slow changes to the display immediately infront of the driver and the 13-inch infotainment touchscreen was much faster once we learned to give it a determined push rather than a glancing swipe. The selectable display on the dash was big and clear.

Slowing in the car produced a noticeable retardation and you could adjust its strength to boost battery recuperation so you didn’t always need to apply the footbrake, but if you did the pedal was very effective  along with the electric parking brake.

Moving off or reversing simply needed a pull or push on a small selector switch and that was it with the throttle depressed. 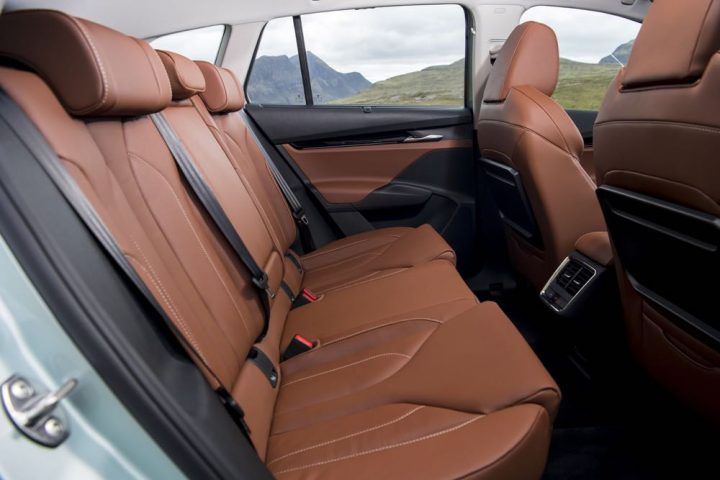 Steering effort could be weighted as desired and it gave good feedback but we were disappointed with the low ratio needed when, for instance, parking in a tight spot, although it did have an automatic system. A tighter turning circle would be a boon in town and cramped country lanes.

Visibility was reasonably good apart from the high tail and wide c-pillars when you had to rely on sensors and a very good reversing camera to see hidden objects or people. Very good heated mirrors, wipers/ washers and extremely powerful automatic LED headlights and LED rear lights with dynamic indicators on the test car were standout features as the nights drew in. You’re not going to miss the Enyaq in the day or night. 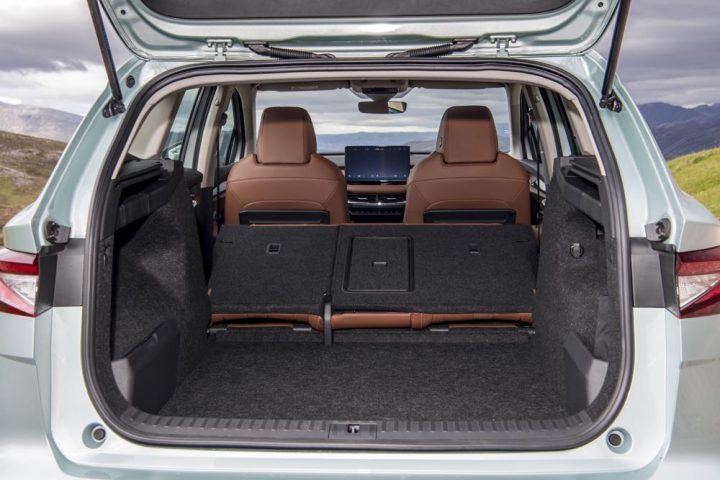 The test car’s standard price was a shade under £41,000 but it came with £7,100 of extras including uprated LED lights both ends, big sunroof and assisted driving, sports and infotainment packs as well as the 125kW DC battery charging cable and I think some of these should be standard not extras at this end of the premium SUV sector.

After all, Skoda made a name for itself with its value for money range and it could do again as it goes down a new green road with its wow-factor. 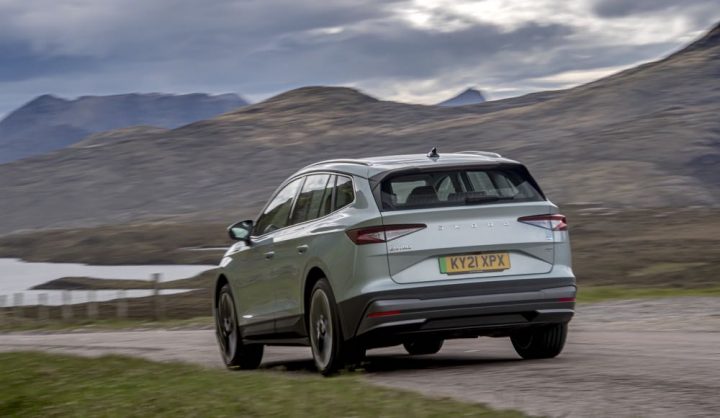