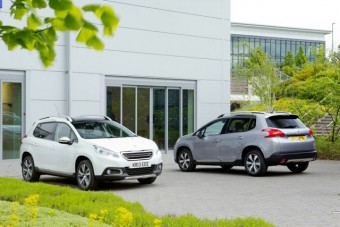 The hatchback small-medium sized models have a new entrant in the shape of the Peugeot 2008 Crossover which hits roads in the middle of July.

Closely related to the larger medium-sized 3008, the slightly more compact 2008 Crossover is a natural development from the new 208 and many will consider a successor to the 207 SW series.

The five-door, five-seat 2008 Crossover sits between its stablemates in terms of overall size and carrying capacity so it will hold between 360 and 1194 litres depending on how the back seats are quickly flipped or used and utilizing some underfloor storage as well.

Up front there is a familiar range of petrol and diesel engines starting off with a 3cyl 1.2 82bhp, anticipated to be the best seller for private buyers, but there is also a 120bhp 1.6, and the diesel series for now includes 68bhp 1.4 along with 92bhp 1.6 and a 115bhp 1.6, some with sequential 6sp automatic transmission. Peugeot plan to add more powertrain choices over the coming months including a 99gkm 1.2 with autobox and stop&start.

There are four trim levels of Access+, Active, Allure and Feline and the range of optional and standard equipment depending on model includes advance grip control to give four-wheel-drive like traction, choice of consoles and interior lighting as well as a parallel self-parking and extracting system. 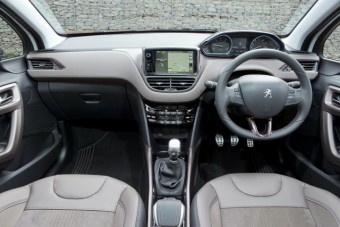 With a 16.5cm ground clearance the availability of the patented PSA Group grip control gives it real world ability to cope with mud, snow and sand for all year round practicality at the turn of a control on the central tunnel.

This was very impressively demonstrated when it became the first launch to be held on the Tamworth indoor snow slope where the 4WD 2008 Crossover powered up and eased down the hill with total control.

The B-sector is growing in importance, not only in Britain but globally, and Peugeot is doing slightly better than rivals and believes the 2008 Crossover will play a big part in its future success, said PR director Andrew Didlick.

“We have had a great year in the UK and our income from outside Europe is steadily rising as well,” he said, adding that it will start to build Peugeots in China very soon and North Africa is also a very strong area for the French brand.

UK PR manager Steve Fahey said that the B-sector was expanding every year and buyers wanted models which easily performed more than one role in their lives. By the end of next year, 80pc of Peugeot’s range will be renewed.

“The 2008 Crossover is a car without compromise and we are confident of selling about 9,000 in Britain in a full year,” he added.

Mr Fahey said he believed the lower powered models will be the bigger sellers, both to fleet and private buyers, with the petrol versions mostly favoured by individuals as opposed to high-mileage fleet users choosing diesels.

While it looks at hybrids in other ranges, there are no plans to introduce Peugeot 2008 Crossover hybrids which would disadvantage the lightweight design of the new model and restrict room inside.

It’s not every summer’s day you get the chance to charge up or down a snow slope in a car, particularly when it’s indoors, but that was the opportunity with the Peugeot 2008 Crossover at its launch. 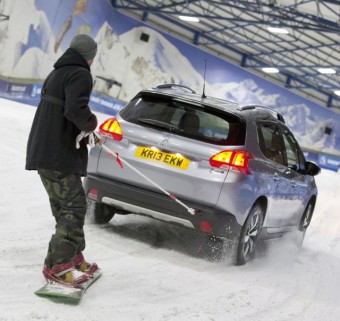 As if to emphasise the point, a feeble few feet were all that was possible in a front wheel drive version at the bottom of the Tamworth slope but then moving into another with grip control and your senses slip away even if the car does not.

With total control and remarkable smoothness and silence, the 4WD equipped model eased up the hill, turned at the top and descended without danger.  Here’s a family hold all which packs in immense ability as well as comfort and it’s very easy to drive.

Back on the road, with not an icicle in sight, both 82bhp 1.2 3cyl and 4cyl 115bhp 1.6 e-HDi proved very good all-rounders. The diesel delivered 58.7mpg on test, the busy but delightfully smooth little petrol pushed along at 42mpg.

You immediately appreciate the slightly higher riding position and the room infront and back is very good, the ride is smooth and the handling safe if not thrilling.

The modest power from the engines makes for reasonable progress, the steering and brakes are good but I disliked the very long travel clutch on the 3cyl model but which was not an issue with the diesel.

The new Peugeot 2008 is one of the most comfortable and capable crossover cars on the market at the moment.