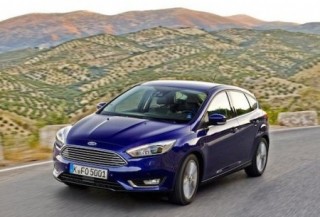 The new-look Ford Focus raises the bar for its rivals to clear with its latest engines, refined chassis and improved sophistication and equipment.

There are the new 1.5 EcoBoost petrol engines along with a new 1.5 diesel unit and some of the existing engines have been re-worked to deliver more power and economy as well.

Sophistication comes with the Sync2 system which was designed to make every secondary control function a two or three click operation to minimize distractions and improve road safety.

Prices are roughly those of the outgoing model and insurance groups have to be confirmed but are expected to be similar to the current model as improved safety features will impact on the premiums. Early reports from independent analysts suggest new Focus will have a residual value about 12% higher than the outgoing versions.

The 1.6 petrol engine has been replaced with the newest Bridgend-built 1.5 Ecoboost and this new engine matches the 180bhp and 270lb ft of pulling power of the outgoing one, while achieving improved fuel economy and lower CO2 emissions of 127g/km. A 148bhp option will also be available.

The outgoing Focus was the first Ford to get parallel parking assistance, and the 2014 model will add a self-parking function that can steer the car into bays. Park-Out Assist is also new, which helps with exiting a tight parking space, while Cross Traffic Alert warns drivers of vehicles moving across their reversing line.

Models start at £13,995 for the entry-level Studio model. 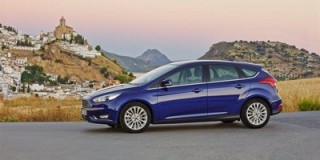 Currently there are 12 powertrain options compared to just five in 1998, but Ford plan to roll out more over the next 12 months under the hatch and estate bodystyles, including petrol and diesel ST versions early next year.

Ford Focus project manager Rainer Wode said the new model represented the best teamwork between the UK and German engineering teams and added, “We are very proud of the engineering which has gone into this car which we will see for many years to come in Europe and the rest of the world. We have really good people working on this car and they have shown a tremendous passion which you can see in the every part of the car.”

Ford of Britain marketing director Anthony Ireson said Focus has dominated the British market for a 16 years and the new model has been created to meet changing expectations for the future, particularly its technology.

Although its sales are dominated by fleet purchasers, he said there are more private buyers now ordering the car and the newest cleaner 1.0 Ecoboost is growing in popularity among retail purchasers. 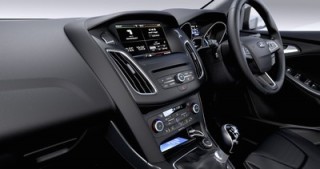 While a lot of emphasis is being placed on the voice-activated Sync2 infotainment system in the car, and it is good, there is no denying the mechanical prowess of the product.

The familiar but retuned small three-cylinder 1.0 EcoBoost goes surprisingly well in 125ps form with a six-speed manual gearbox – a 6sp automatic is coming later in 2015 – and it will happily keep up with the motorway, main road or urban commute but it is the latest 1.5 EcoBoost petrol unit made in Bridgend Engine Plant which is more pleasing.

There is a gutsy 182PS we tested as well as 150ps derivative and it delivers strong pulling power mid-range when you are not contentedly cruising in the overdrive 5th or 6th gears.

Over some very demanding Spanish mountain roads of questionable surface quality, the bigger 182ps EcoBoost was very responsive, forgiving, powerful and composed. A very light flick of the wrist 6sp gearbox meant you could maximize the engine’s power and the new electric steering and reassuring brakes instilled confidence with their feel and feedback. 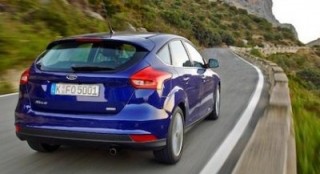 The smaller 125ps 1.0 EcoBoost petrol engines had to be worked harder but it was never struggling or unduly noisy and it produced 30.1mpg on test compared to the 26.1mpg achieved with the 1.5 EcoBoost.

A spell in the revised 150ps 2.0 diesel 6sp manual saw it return 49mpg and there is bags of pulling power underfoot and its extremely flexible, making it an ideal model for high mileage or towing purposes. In the wagon or estate tested there was a lot of rear luggage space.

The new Focus hatch or estate is a very well sorted handling car with really good ride quality, reasonably good room and it oozes refinement with its black satin trim and chrome detailing inside.