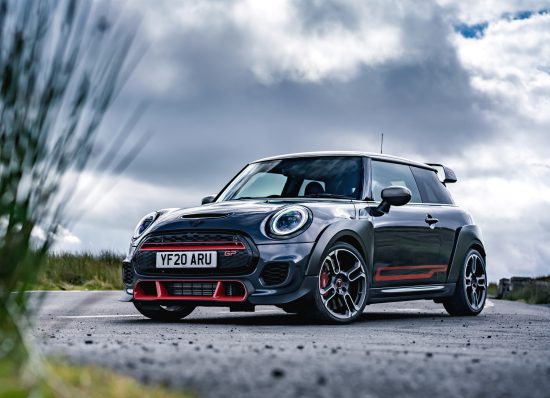 Following the success of the two previous MINI GP models introduced in 2006 and 2013, the new limited edition MINI John Cooper Works GP3, is the most powerful and fastest production MINI ever sold, writes David Miles.

Just 3,000 of these models will be built at MINI Plant Oxford for global sales with 575 of them available to UK customers.

They are priced from £35,345 on-the-road or track for the lighter weight base version or £37,345 if fitted with the Touring Pack.

This pack adds such items as the 8.8-inch display for the Navigation Plus Pack plus there is Apple CarPlay, MINI Connected and other items found on ‘normal’ MINIs such as automatic air-con, heated seats and better noise insulation material.

The engine and standard fit 8-speed automatic transmission are closely related to the same powertrain as used in the BMW M135i, but there the similarity ends. 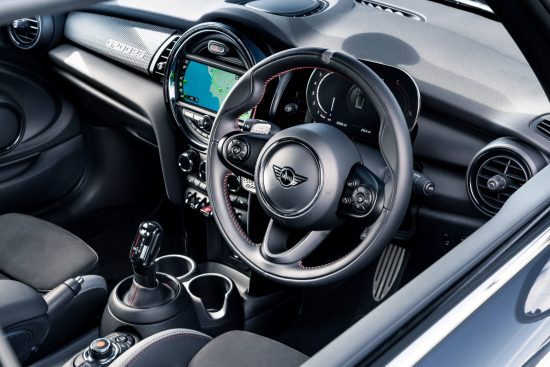 For the MINI 3-door hatchback body  has seating just for two and the rear  is given over to load space of 612 to 816-litres with passenger shielded from potential luggage hitting their sports seat backs under braking with a protection bar which actually looks as though it is there for strengthening of the bodyshell.

The rear seats are not fitted to save weight and to allow for additional bodywork strengthening  In essence this is a track day car but suitable for two-up road travel if you are brave and bold enough.

Perhaps the most talked about styling tweak, apart from the roof spoiler, is the carbon fibre wheelarch spats bearing each car’s individual limited edition number. These are apparently required because of the wider front wheel track and use of the 8J 18-inch alloy wheels with 225/35 profile tyres. 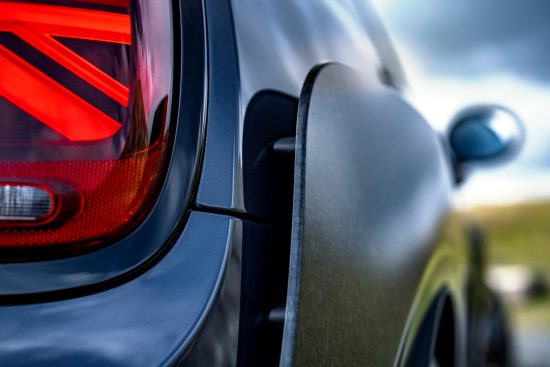 The spats look odd, like an aftermarket accessory fit and stand proud of the bodywork so mud, silt and rain can get between the spats and the bodyshell which was evident on my test car. I see the need for them for legal requirements but why they sit away from the bodyshell is very odd and looks naff and contrived.

Inside its very much posh MINI even for the base spec version with two JCW bucket sports seats upholstered in leather with red seat belts, central armrest, there is the GP version of the MINI digital cockpit, lots of GP labelled trim inserts and GP monogrammed gear change levers and cruise control.  The more popular GP Touring Pack items I’ve listed earlier in this test drive editorial.

On the technical side the GP3 has a 10mm lowered ride height and a 20mm wider front track than the standard JCW models, it has sports suspension with specific damper settings,  high rate performance springs, stiffer roll bars, and wheel camber settings.

It is fitted with Hankook performance tyres, a JCW sports braking system with 4-piston front callipers, enhanced air intake system, a Torsion sports mechanical differential and specific Dynamic Stability Control performance settings including a GP mode which can be turned off. 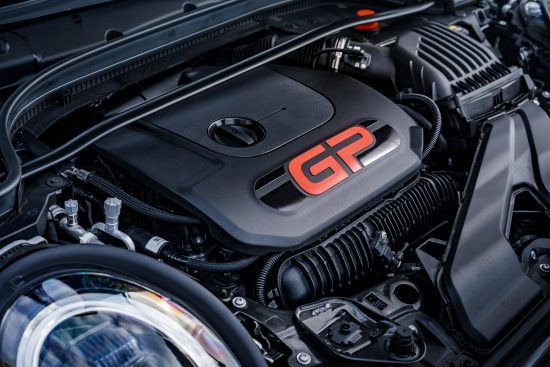 At the heart of the MINI GP3 is a 2.0-litre, 4-cylinder, TwinPower turbo petrol engine more or less straight from the hot-shot BMW M135i.

So is the standard fit 8-speed sports automatic transmission but its front wheel drive only, no ALL4 weighty 4WD traction for this version.

Power output is 306hp with 450Nm of torque from 1,750rpm and the performance figures I’ve already quoted. Additionally the official Combined Cycle fuel consumption figure is 34mpg, (30mpg on my short test drive). The CO2 emissions are 189g/km so VED road tax First Year rate is £870 followed by the £150 Standard rate and company car Benefit-in-Kind tax (very likely you’ll be allowed one unless you are the Company) is the maximum 37%.  Insurance will be very negotiable depending on use, location, age and experience but will be based on a probable 30E rating.

No driver is going to get an easy ride with the MINI GP3, it’s a track-day orientated product. In base spec form it is more rustic with less sound deadening and no air-con to weigh it down. The Touring Pack option socialises the product in part with a nicer interior if it’s going to be used as a main every day car. 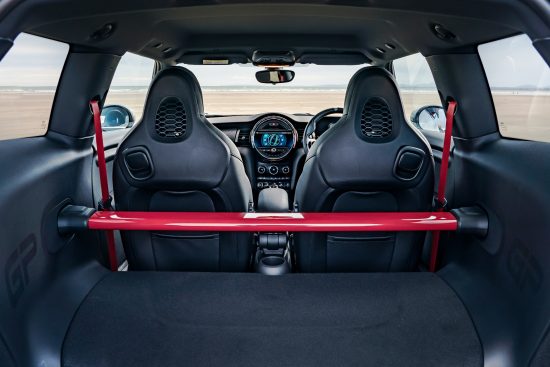 But that’s not what the GP3 was designed for, traffic cluttered public roads are not its friend, it doesn’t like chuffing along at stop-start speeds, its hungry to be let loose on open roads with good road surfaces and nicely cambered bends. If you can find one like that as I just about did in West Oxfordshire, then its performance is stunning.

Cornering grip is immense; no sign of understeer at legal cornering speeds but there is huge torque-steer if the power is applied to quickly. The differential just cannot dispense the torque equally to the front wheels which scrabble for grip but once grip is found the acceleration is huge and the wide torque band gives this unit a huge range of pulling power. In fact at times it’s the 8-speed auto gearbox that can feel slow to respond with gearchanges to accommodate the power output.

It’s fast, it’s agile, it’s nimble it’s potentially dangerous in over adventurous unskilled hands, it’s fun if you are in the mood and it can be very hard-riding on in-town poorer road surfaces. The hard suspension causes the car to hop about, become very unsettled and generally tiresome.

The very stiff suspension is not at all compliant as you might expect from a track-day car but the GP3 will be used by more road users than racing wannabes. Perhaps the base car should keep the stiff suspension settings but the Touring Pack version could have as standard a less radical suspension firmness to it without losing most of its handling abilities – surely that’s possible in this day and age. 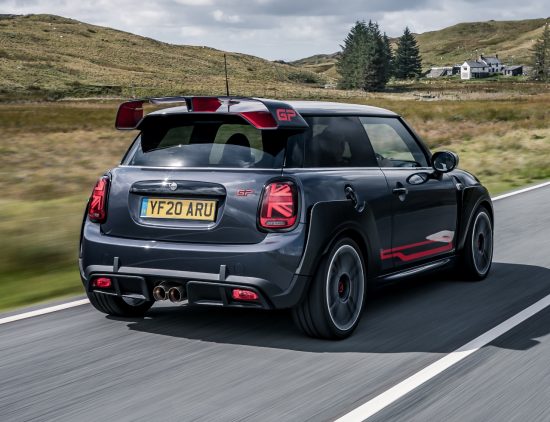 Whatever uses the owner has for the MINI GP3 it will surely make them smile despite its non-eco friendly application and sometimes rough ride. They will smile not least because of the performance it has but also money wise when you consider the Pound Sterling per mph value this car gives. It has to be considered a bargain and when did we last say that about a MINI?

For: Fastest and most powerful production MINI ever offered for sale, made in the UK, extreme performance, superb road holding and front end cornering grip, exclusivity and good value for money if you want that level of performance, fun factor 10 for some owners

Against:  Some questionable body enhancement tweaks such as the wheelarch spats and the very oversized rear roof mounted wing, a very firm ride which is OK for track use but tiresome for road driving, slow auto/man gearchanges during hard acceleration, massive amounts of torque-steer at times.