The coming of the electric car age is going to make us all re-evaluate our motoring lives and what we expect from them, much in the same way as the diminutive Mini drove a change in our lives over 60 years ago.

So it seems reasonable that the MINI Electric might just do what its petrol forebears did and change our views towards electric cars of today. 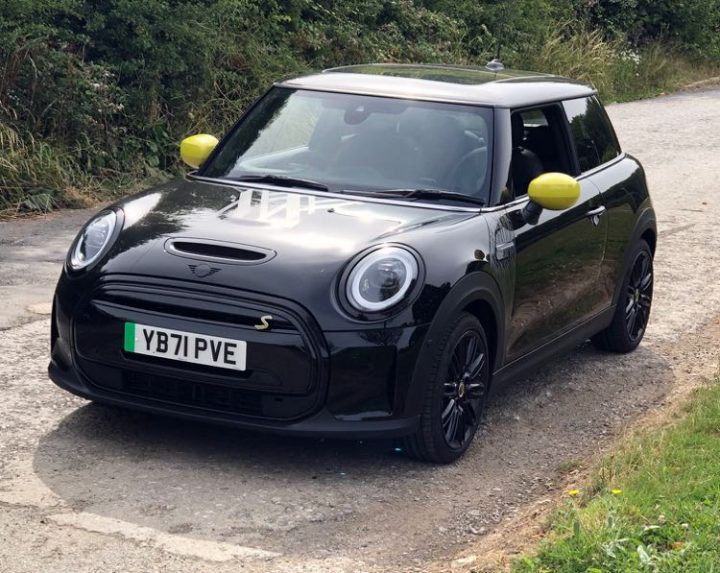 While some brands are locked in stretching the range, padding up features and weight and asking a lot of money for what is essentially a very simple technology, the MINI Electric takes a different approach.

Our mid-range Cooper S Shadow edition was fitted with optional heated steering wheel and tinted glass at £500 on standard price. There are also five other trim levels.

Depending on power source, the electric MINI can be recharged in between 28 mins on rapid box to a little under five hours on a domestic point.

Its battery is a high-density unit which packs a punch above its weight and by careful design and engineering it uses the added weight to endow the MINI Electric with some seriously enjoyable handling thanks to the low centre of gravity. 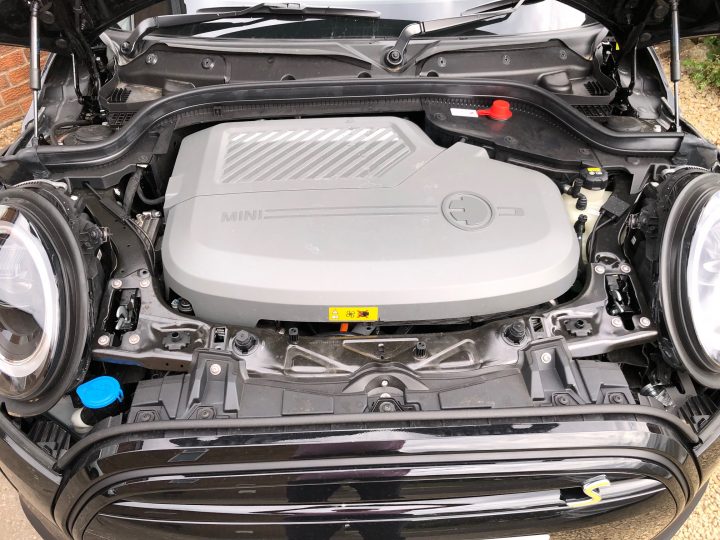 The motor is where you’d find a petrol unit in the traditional car driving the front wheels but the battery lies low under the rear passenger seat and cabin floor.

The 33kWh battery and 135kw motor give the car snappy acceleration when kick-down is used in Sport mode and it can embarrass many petrol hot hatches as a result.

You have Sport, Mid, Green and Green+ modes which determine the amount of power and possible range. The most lightfoot setting will add a reasonable ten miles or more to your overall range and is worth using when not in a hurry and that means possibly close to 140 miles is achievable.

It’s particularly surprising because the absence of familiar sounds associated with a petrol engine seem to catch out a driver’s senses and expectations.

The very smooth and swift power delivery is impressive whether in Sport or Green modes, the car’s steering is highly responsive if a little dead in feedback and the brakes, should you use them, easily contain that performance but in the high recuperative setting there is very strong retardation which essentially means you can drive the MINI Electric on one pedal alone without the need to touch the brake pedal, but you still have an electronic parking brake. 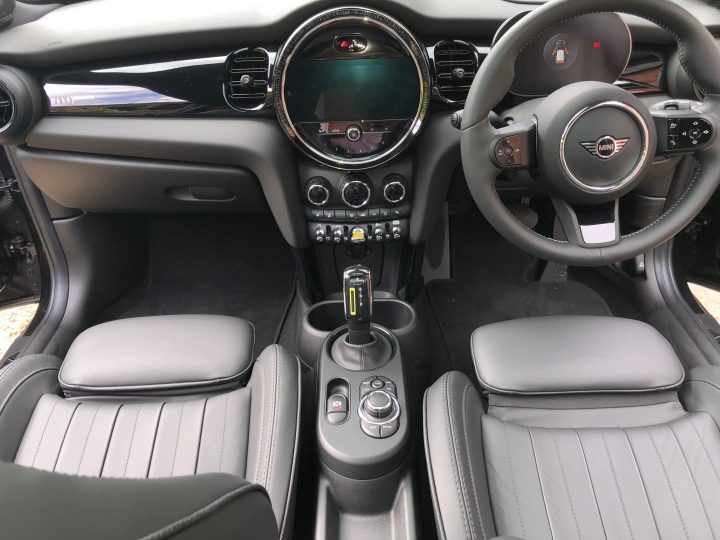 The MINI Electric will change your driving style to an easier experience if you choose but on the other foot you can ease off the retardation setting so you have to use the brake pedal and it imparts a more familiar feel.

MINI has traditionally had an agile feel and the Electric does respond well to sweeping along twisting roads, swiftly overtaking when pressed to perform, grabbing the ground through tight turns and slowing with total control. But it also rides much better than many other MINIs I have driven and it was rarely shaken by ridges, more so by potholes in fact. 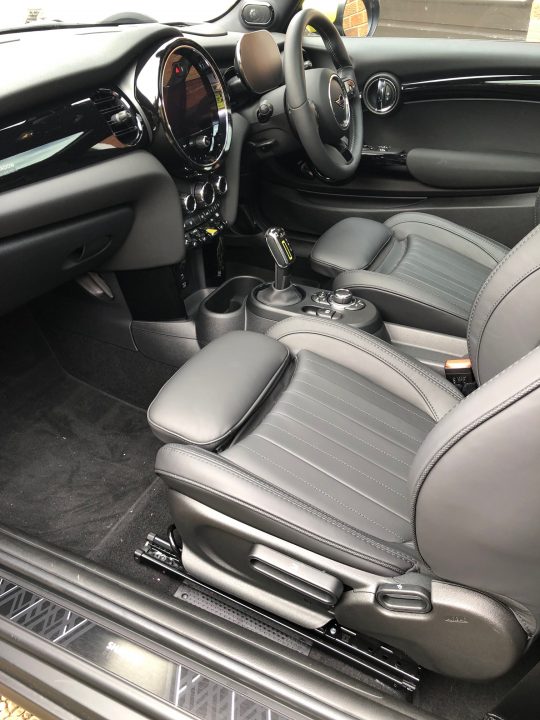 Enjoyable as it was on the open road, the turning circle was not as compact as you might expect when parking or manoeuvring in town. I also became annoyed at the touch and go indicators and wipers and struggled to find the right amount of pressure to apply to effect a short or longer operation, but this is something which only comes with familiarity over time. Instead it left me thinking they were too sensitive.

The steering wheel spokes carried a lot of secondary switches for cruise control and the infotainment system and these worked well every time by way of contrast. 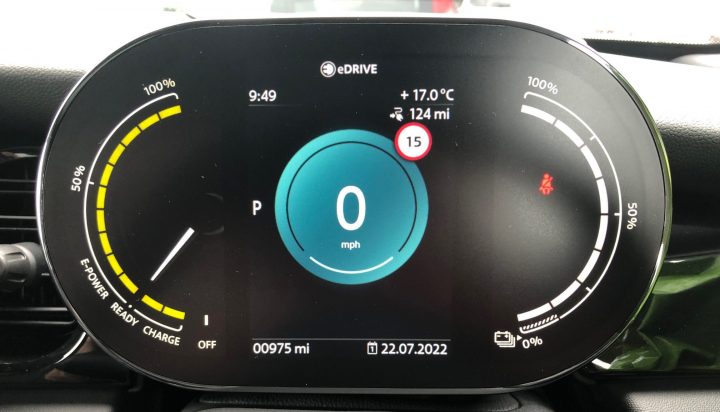 Infront of the driver is a display for power metering and remaining battery charge which are split by a variety of alerts and displays for roadspeed, remaining miles, temperature etc.. All beautifully clear and easy to read. 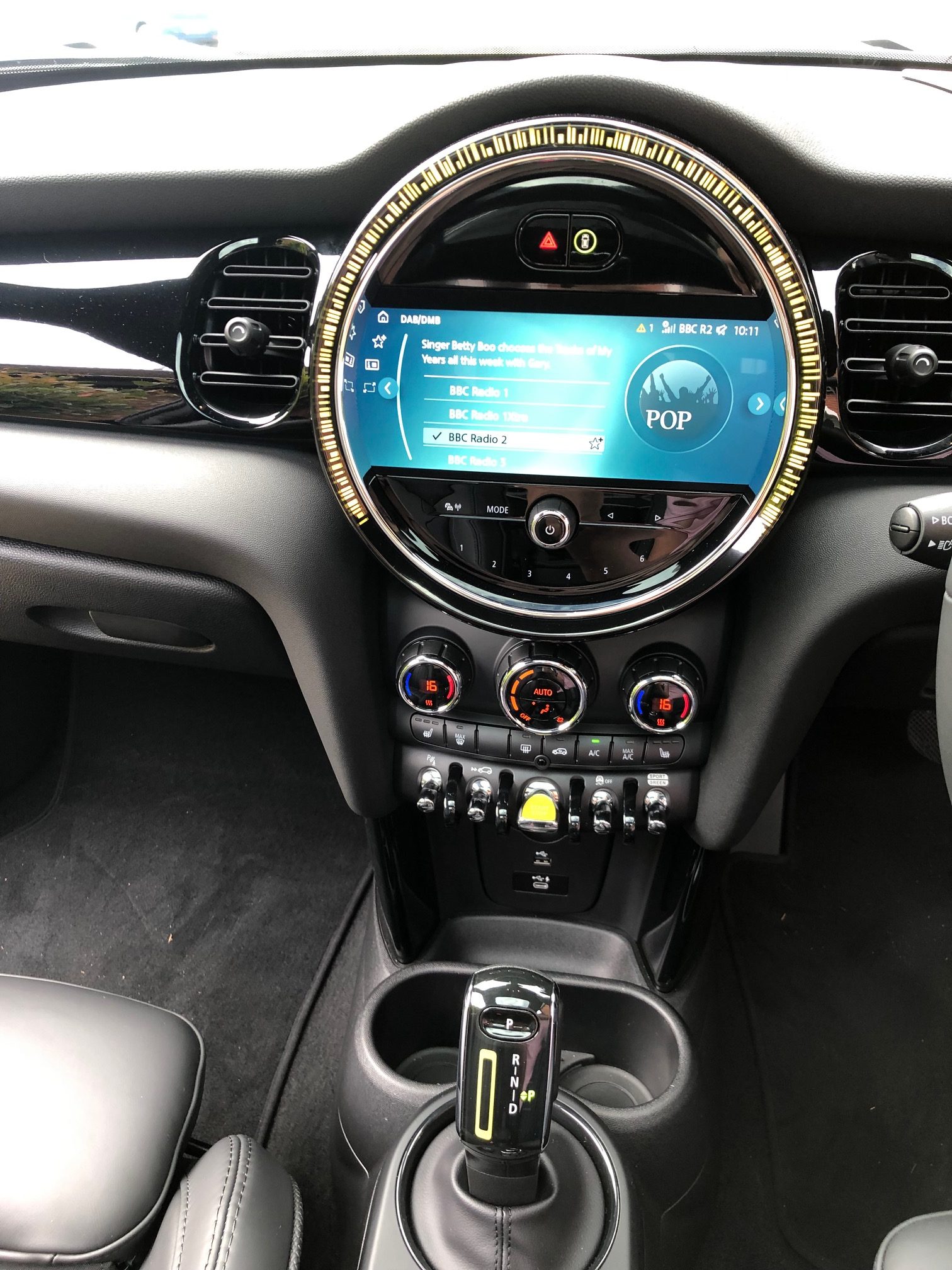 The fascia is dominated by the 25cms/ 10-inch diameter circular multi-function display for navigation, entertainment, telephone and personalised settings which a number of passengers said really struck them as being distinctive, taking its design queue from the first Mini’s similar display holding just speed and fluid levels readouts.

Below this very big instrument are various climate and heating controls along with switches for added features including the Sport and Green toggle and on/ off power ignition switch.

The air conditioning worked well once we found the ideal setting and it’s helped by powered side front windows and our test car had a powered tilt or retract sunroof ahead of a fixed glass panel so it looked and felt very airy. The mirror housing carried courtesy lights and e-call button as well as the roof control. 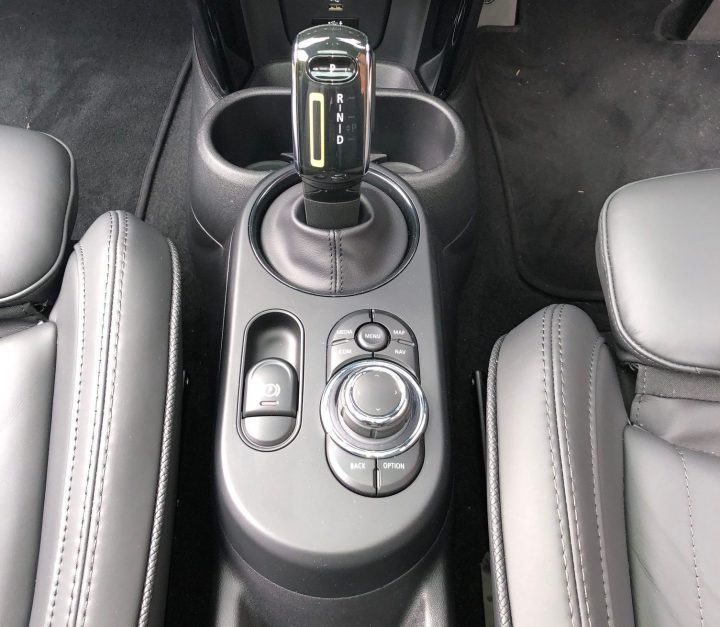 Oddments provision was by a series of small recesses, trays, cup-holders and bins of limited sizes, but it’s worth mentioning the inductive charging station for a phone set into the armrest. Seat back pockets in the rear and small bins were also provided and there were several USB points in the cabin.

Getting into the back seats was very difficult unless you were a nimble nipper or tentacle-like teenager and once there the leg and headroom was very restricted. It was not the place to try and secure a child-seat either. 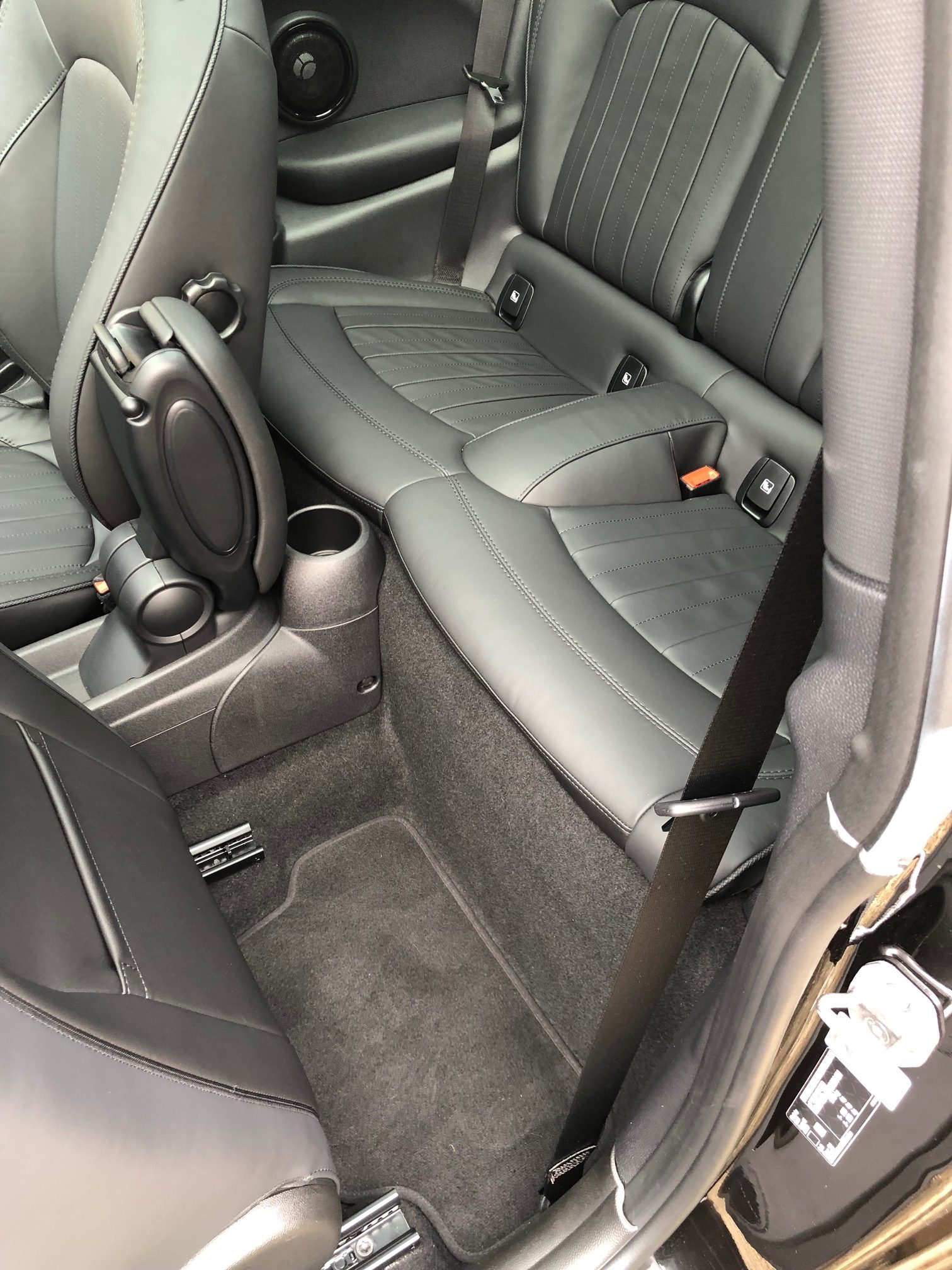 The wide opening doors gave good access to the front seats by contrast and there was plenty of room for occupants, with manual controls for reach, recline and height, excellent well shaped cushions and bolsters and easily moved headrests.

Bootspace was suitable only for a couple of weekend or shopping bags unless you dropped down the rear seat backs and these did not lie horizontal, and the bootfloor hid the compartment for stowing the domestic and rapid charger cables and get-you-home tyre repair kit as there’s no-where to carry a spare wheel.

Visibility was very good all round and sensors and camera worked well to alert when parking while bright lights and effective wipers front and back did a good job.

As stated, the only real engine noise was a familiar hum from the motor when running, with road rumbles very low and almost no wind noise intruding unless the roof or side windows were open.

Concluding almost where we started and looking at the performance of the MINI Electric: It was lively when required and using the driving aids it could be economical as well. A full charge on two occasions would not go beyond 125 miles so it’s essentially a city or commuting car which may need recharging two or three times a week and the MINI app can assist with longer journeys and works through the big settings display. 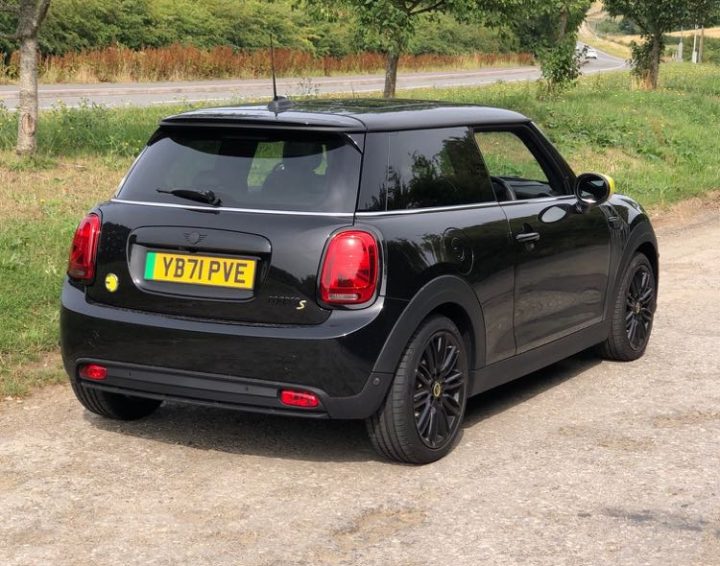 While it does not have the charge to recharge range of some rivals, it is a realistic proposition for many and better priced than less stylish challengers.

More importantly it’s worth remembering that a destination is not as important as the fun you have getting there and MINI Electric is smiles better than many others.

A forthcoming MINI crossover concept has been unveiled in Munich which will bridge the gap between the Cooper and Countryman designs. 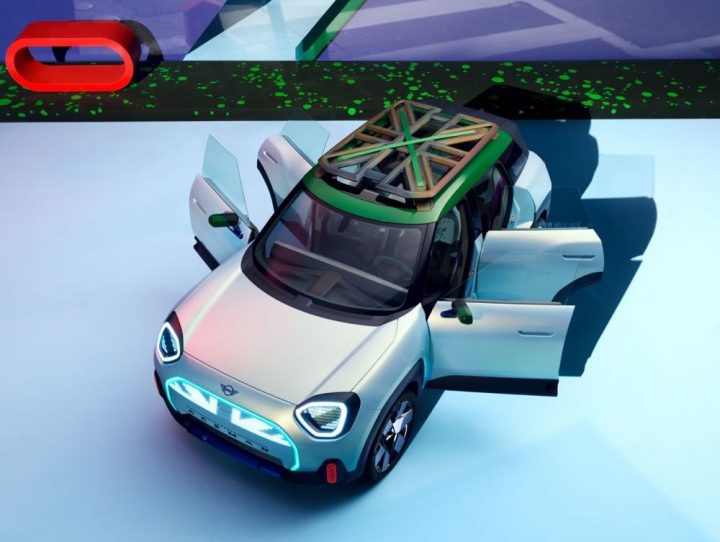 The pure electric four-door, five-seat Concept Aceman is longer, wider and higher than the Cooper and features natural recycled materials and new light emitting diode displays inside, smoother exterior lines with an enclosed grille, while round headlights have been ditched.