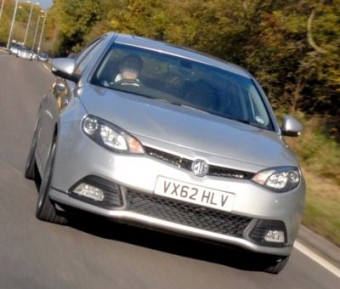 If enthusiasm and loyalty alone sold cars, the MG brand would be a best-seller in Britain.

There are a lot of drivers who have memories and money enough to buy one of the new models now being rolled out of the factory in Longbridge which was once home to the Rover Group and before that, British Leyland. The plant on the southern edge of Birmingham now builds saloons and hatchbacks which carry the famous octagon badge and it’s home to an international design and technical centre as well, but the new cars start their lives on the other side of the world in China before being shipped to the UK for final assembly.

A considerable expansion will take place in Longbridge this year when it adds a new small car to its line-up and the dealer network is also being increased to meet this higher output and the wider range. Recently, MG brought out a special finance package for business users to underline its objective and appeal.

MG6 is sold as a Magnette saloon with 498litres boot or as tested here, a GT Hatchback with greater practicality but the same overall capacity of 1379litres. There are three trim levels and choice of 158ps 1.8 petrol or 150ps 1850cc diesel engines, but there is only a 6sp manual boxes and no automatic, which immediately affects its choice as a company car for many high mileage and urban drivers.

The engine and six speed manual box in the test model was a very good powertrain, giving brisk pickup, very relaxed long-legged performance and reasonable fuel economy. I was not happy with the frequent delays to it starting up initially on a push-in key or the way it could stall when restarting in traffic with a heavy and unprogressive clutch but possibly this was a flaw with the particular test car.

It had a very precise gearchange and it always seemed to have power in reserve. On the motorway or main roads it was quiet at the limit and road and wind noises were very low.

The turning circle was fairly tight in town and it gave reasonable feedback on twisting roads while the brakes also had good feel underfoot and slowed it quickly and without drama. Some of the secondary switches on the wheel-spokes are very poorly marked, particularly at night, but the usual wipers/ main beam stalks and fascia rotary for the lights are clear by comparison. 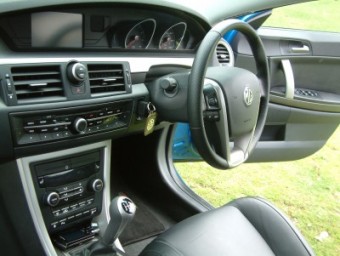 Instruments are very simply designed and clear infront of the driver including a multi-mode panel between the tacho and speedometer. Heating and ventilation is similarly straightforward and very effective. Oddments room is useful throughout and the boot is a good size under the fifth door and it’s easy to load and extend the available space. Big doors open wide to reveal a fairly roomy interior and five seats with good padding and particularly well shaped backrests on the front pair which make long journeys comfortable, helped by a wide range of adjustment on them.

In terms of visibility, the MG6 is good to the front and sides, with bright lights and effective wipers, but reversing and observing traffic behind is very difficult because of the high tail, letter-box like back window and very wide c-pillars to the roof. You really need the sensors on the test car and its not a model which the inexperienced or nervous driver should consider, particularly if they spend a lot of time in an urban environment.

Some may also consider the interior a very workmanlike place with few design highlights or eye-catching features and a young motorist told me it looked “drab”, so its unlikely to win-over this age group. 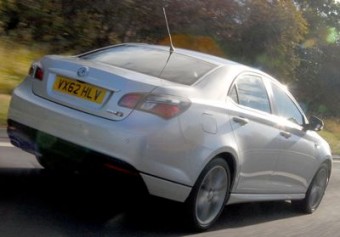 Nevertheless it is a comfortable car with good ride, safe handling and no real vices which covered ground easily, smoothly and quickly as well as with modest fuel consumption. I think the MG6GT has a lot going for it unless you want the very latest cutting edge interior design features and put this above a well-priced and equipped roomy hatchback which is still a rarity on the road.