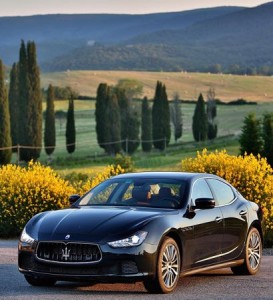 Maserati has moved from exotic to executive with their first diesel saloon carrying the Ghibli name.

Always a thinking person’s alternative to more bread and butter executive models, the Ghibli is now pitched into the heart of serious business decisions driven by efficiency and the availability of diesel power.

Maserati looked hard at what it wanted out of a diesel and the 3.0V6 is similar to MB’s power unit and also that used to great effect by Jeep.

While not the most powerful diesel block, the Maserati V6 packs a good punch and a broad spread of power which means it is fairly economical as our test figure shows.

Matched to with an 8-speed automatic box using lever and paddles it instantly provides a seamless spread of power from depressing the throttle and while it is not particularly quiet it can also be encouraged to sound gruffer with a sport switch.

At over 2 Tonnes and nearly 5M long by 2M wide it is a big car but it picks up strongly and is in its element on motorways and main roads, covering the ground without complaint and always with a little in reserve for safely overtaking. 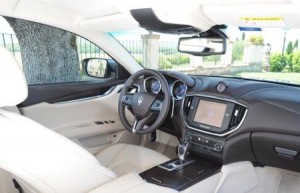 Steering was pleasantly light not too heavy for such a big car and the brakes seemed up to their task when slowing from speed but I did find the back end scrambling for grip in some situations which suggested the traction control system was not as well tuned as it might have been.

Also, reversing on a tight lock occasionally produced a grinding noise which subsequent investigations revealed was due to an insecure wheel-arch liner.

The big wheels and tyres produced a reasonably good ride through the fully independent suspension all round but they also generated a lot of road noise and bump-thump over potholes.

In fact, the Ghibli would skip over some potholes mid-corner and it never felt as settled as it might have been although it was always safe.

It is a four-door and five-seater with some shortage of rear legroom for taller people but oddments room is good in the cabin and the boot is very big at 500 litres but the actual access aperture is not so you have to wiggle in some items and watch them disappear into the space.

For the driver and passenger there is very good room in the front and the seats have a very wide adjustment range, while the quality feel and look of the interior sets it apart from other executive rivals in the saloon sector. Good to see the classic Maserati clock retained as a unique detail in its own right.

Major controls are all close to hand and the secondary switches  are clearly laid out while the beautifully designed instruments are also clear to read.

Heating and ventilation is very comprehensive and effective.

The Maserati Ghibli diesel is a worthwhile addition to the series and a very welcome alternative to more traditional offerings in the executive sector. 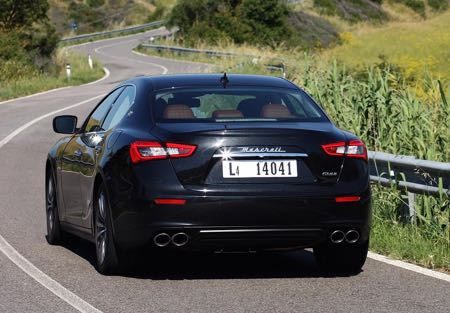 In a golf club or bar when contemporaries are talking about their German cars it also tends to stop the conversation if you mention the Maserati outside is yours. It sets you apart like few other marques can.