The Lamborghini Urus is probably the ultimate “boys toy” for Fathers’ Day.

It’s headturning, big, quick and possesses some of the most wonderful exhaust notes you can hear on the road.

In the rarified world of truly luxurious cars and SUVs, the Lamborghini Urus is one of the most highly desired and it’s purely a matter of personal taste whether you prefer its shark like lines to those of the Bentley Bentayga, Porsche Cayenne, Audi Q8 or Volkswagen Touareg, which share the same platform but into which Lamborghini has squeezed a more highly tuned 4.0V8 twin-turbo engine and eight-speed automatic/ manual transmission with permanent four-wheel-drive. 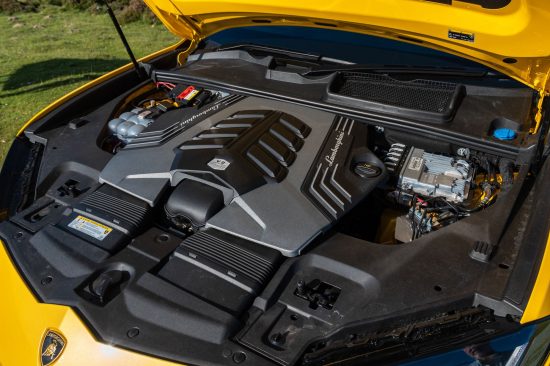 It’s a very big step from the ultra low sports cars usually associated with the brand and an even bigger jump from the agricultural vehicles which Lamborghini started making in 1948 before switching to sports cars to rival Ferrari in the mid-1960s. Ironically, Ferrari is now developing its own SUV.

But now lets get back to the subject of this roadtest, the Lamborghini Urus named after the enormous cattle which roamed across Europe thousands of years ago and which happens to perfectly fit with the company’s emblem of a raging bull showing strength, power and determination. 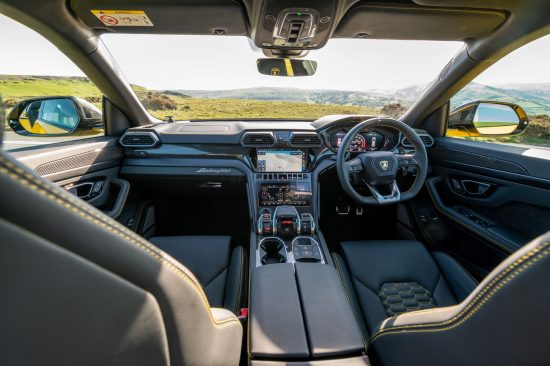 The  Urus performance comes in abundance from the highly tuned 4.0V8 engine. With a start button concealed under a hinged cover as in an aeroplane the sound lets you know that take-off is about to commence as it roars into life.

Enormous torque of 850Nm at 2250rpm transfers through the 8-speed gearbox and intelligent four-wheel-drive to give a big push in the back as it zips through the 60mph mark, a few seconds later hitting 100mph and onto nearly twice that speed if conditions permit. 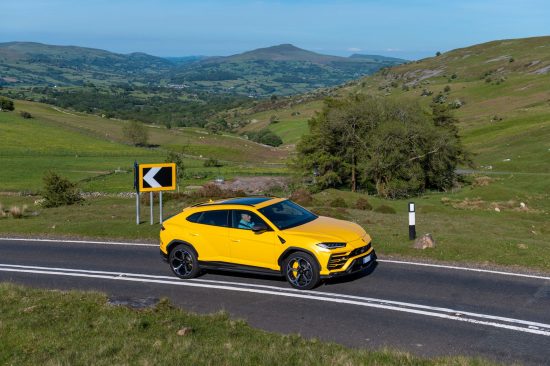 The urge and surge never diminishes if you want to very swiftly and safely overtake on main roads or winding country routes and made easier with its high riding position to give excellent forward vision. Changes are incredibly smooth, lightning quick and there always seemed to be the right gear for the moment but you can use the manual paddles if preferred. 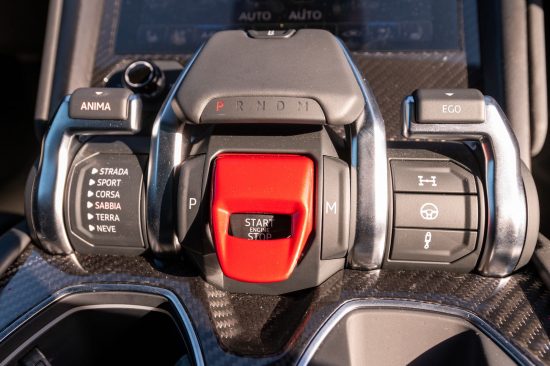 Responses can be refined by selecting from eight modes which alter the powertrain from normal right through to off-road and then a separate range of settings indicating smooth, normal or sport responses for the suspension, steering and driveline covering high performance on-road use with everything lowered or extended ride height for off-road.

Selecting the modes does alter what’s shown on the 12-inch driver’s display to emphasise important elements for that purpose and also picked up by the head-up display on the inside of the windscreen. It’s a technical tour de force for the fortunate driver.

Everything is very clearly displayed even if you have to look around the steering wheel for some data and the secondary controls come immediately to fingers on the wheel-spokes or column with additional buttons on the central console. The infotainment screen is also very big atop that central console and is extremely legible whatever is chosen.

I liked the straightforward heating and ventilation controls, their simplicity, operation and effectiveness were remarkable, backed up by chilled or heated front seats and heated twin rear seats in our four-seater test car. A big sunroof partly opens and all the side windows are powered of course. 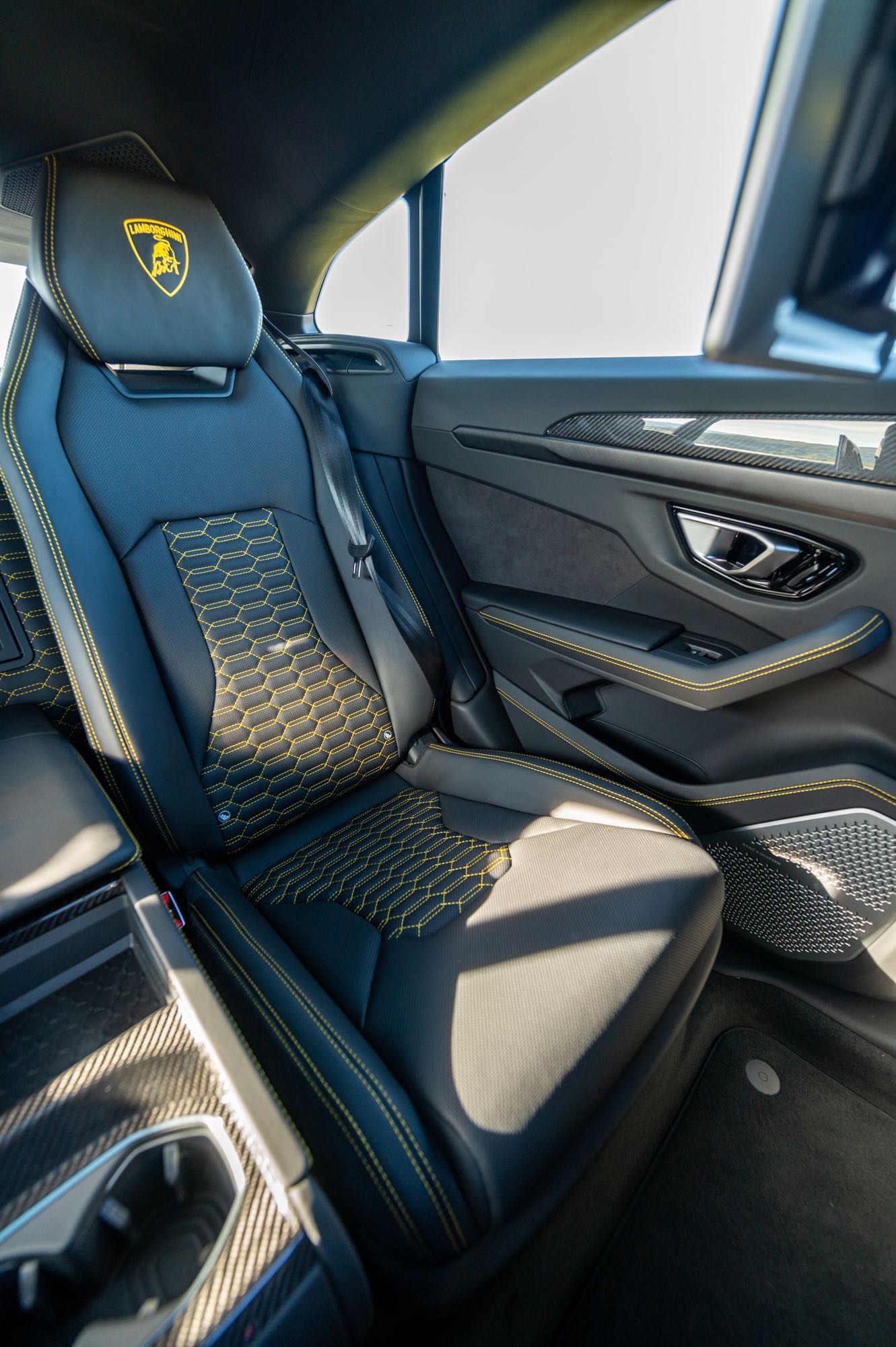 The oddments room is what you’d expect in such a big car with somewhere to put anything infront or behind and those in the back could take advantage of twin screens optionally fitted to the back of the frontseats. The capacity of the Urus’ boot is really huge and well shaped with a good loading/ unloading height and certainly enough for four people’s luggage. Access is very simple although a bit higher than most expect in an SUV and the front pair of seats have a huge adjustment range to capitalise on their excellent shape and support. The smaller rear seats don’t have the same adjustment range but are still very comfortable if slightly short of legroom for taller users. 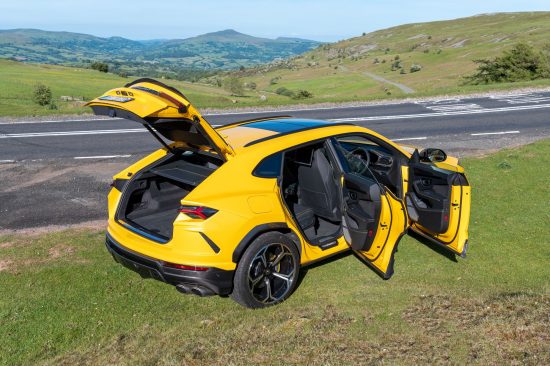 Irrespective of the suspension mode chosen by the driver, the ride quality was very good. It ranged from smooth to firm, not really hard, and the air suspension can be fine tuned within milliseconds. Pitch and dip were minimal and body roll was very well controlled when in a hurry.

The roadholding of the Urus was remarkable for such a big and heavy car and that’s down to the suspension and wide 22-inch wheels and tyres which put down power without slipping or sliding. Handling was safe and surefooted, very predictable and the powertrain shifted traction as required by the surface beneath so the driver could concentrate on arriving rather than getting there. 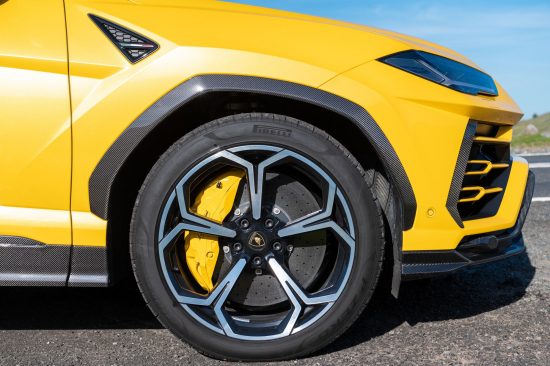 It has some of the biggest carbon fibre disc brakes fitted to any car and exceed 17-inches on the front and about 15-inches on the back wheels so stopping power is immense and reassuring with the lightest pressure.

Line of sight visibililty was slightly restricted to the rear when reversing due to the wide wheelarches and high tail with its shallow back window but the cameras and sensors do a very good job in alerting the driver to dangers. Forward radar keeps the Urus a safe distance from others on busy roads and in bad weather the intelligent headlights and wash/ wipe system give further reassurance.

As the miles passed I found the Lamborghini Urus became easier to drive and its size was less intimidating while its performance continued to impress. 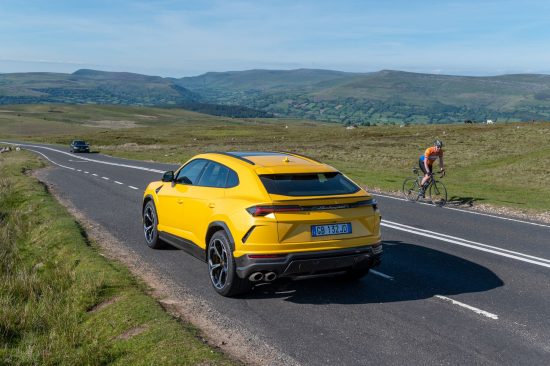 What’s more the fuel consumption was not as bad as many might think and we saw a high of 27mpg and a low of about 17mpg but road tax and insurance are a steady drain on the enjoyment of what is an outstanding modern, stylish and highly sophisticated luxury car.

© Images by Roger Donovan MediaPhotos.co.uk and to order or see more exclusive shots of this and other highy desirable cars visit his automotive site 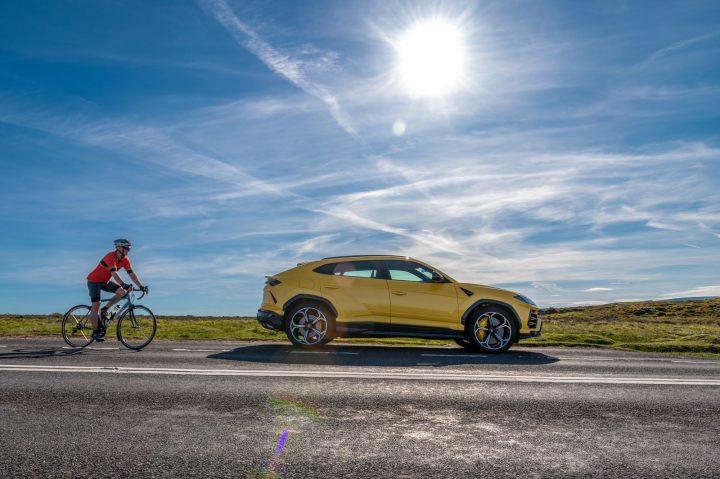